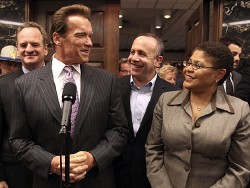 The budget deal that Assembly Speaker Karen Bass and State Senate President Darrell Steinberg cut with Arnold Schwarzenegger and the Republican minority is so atrocious that liberal activists are urging Democrats to vote “no.” Of course, many legislators will insist they have no choice – because the two-thirds requirement forces them into Faustian bargains with right-wing extremists. But if Democrats want to blame Republicans for gutting $15 billion of vital services, resuming offshore oil drilling and recklessly borrowing $11 billion (including a raid on local government revenues), voting for this budget – which is expected to happen today – will do the exact opposite. Most Republicans in the legislature will not vote for it (though they got all they wanted), so why not let it fail and demand a better deal? Meanwhile, state Democratic Party Chair John Burton is rallying grassroots activists against the offshore oil drilling proposal – something that his predecessor, Art Torres, would never have done.

After blatantly lying about what the voters said on May 19th, Schwarzenegger and the Republicans have extorted a right-wing budget for a blue state. But the GOP minority is not happy, as a few have balked at the budget’s early release of non-violent prisoners – which will save $1.2 billion. Rather than capitulate to their demands, how about suggesting a compromise? Democrats would gladly remove this portion, if Republicans support revenue to pay for it. How about an oil severance tax – because California is the one state that doesn’t charge oil companies one? George Bush’s Texas charges oil companies a 15% tax, and Alaska under Governor Sarah Palin actually raised theirs to 25%. When can Democrats learn to say ‘no’?

Granted, Democratic legislators always say their hands are tied – because the two-thirds rule forces them to capitulate to such demands. They always add that a ballot measure to change this a long-term solution, but in the short term we have to lose battle after battle. Meanwhile, I keep hearing they have such a proposition in circulation – but have never once been asked (despite my prolific writing on this subject) to help collect signatures. Any serious effort to put something on the ballot requires paid signature gatherers, but there are enough angry progressives like myself who would gladly volunteer hours of their time to make it easier for Democratic legislators to pass a budget in Sacramento. It’s time for the leadership to start using their valuable asset – grassroots supporters.

One Democrat – State Party Chair John Burton – seems to at least get this. While Bass and Steinberg are lobbying Democratic legislators to vote for the budget, the ex-Senate President rallied the grassroots to oppose the offshore oil drilling proposal. While the Party is not opposing the whole budget, at least Burton is making an effort to give the grassroots a voice. Art Torres, who chaired the state party for 14 years, would have never asked the rank-and-file to lobby the Democratic leaders in Sacramento to do the right thing. He would have rallied activists to say we “have their back.” Burton, on the other hand, gets that just because we have a “deal” doesn’t make it worth passing.