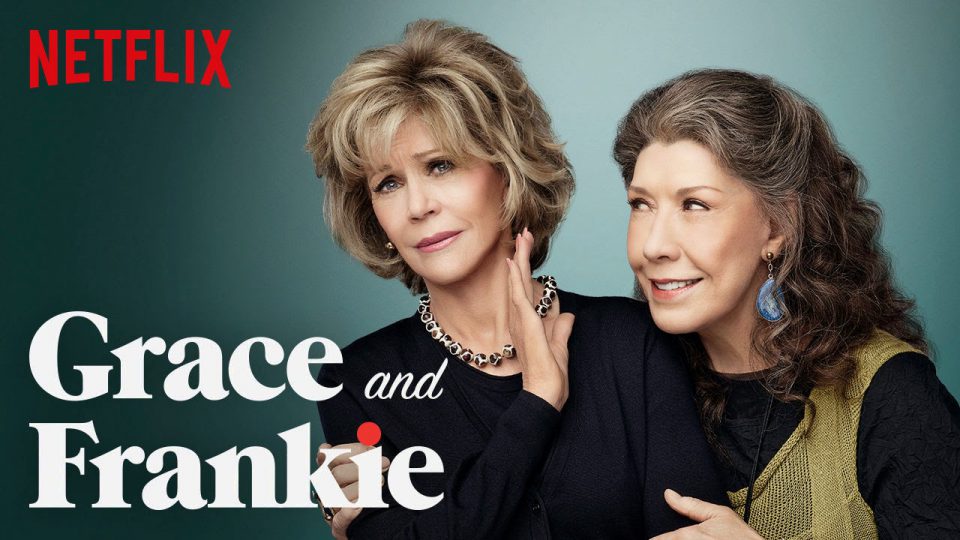 I hope the show’s developers somehow read this piece.  I’d love to see them name and celebrate the universal design ideas already baked into the show.  Here’s what it could look like.

The episode opens with Fonda on her computer.  Suddenly her eyes go wide and she starts shouting:

“Frankie, Frankie, we’ve been invited to a conference!!”

“Universal design?” Tomlin asks in that incredulous way she has.  “What the hell is that?”  I don’t know anything about how to design a university.”

Or maybe she’d say – true to her spacey (but spiritually deep), new-age character –

“Universal design?” The universe is already perfect – what the hell do they need a conference for?”

Then Fonda’s Grace would roll her gorgeous eyes as she does in most episodes, and explain it all to her best friend.

“Universal design” is about making products and environments that work for everyone,” Frankie. Like having ramps so wheelchair users (or old ladies with walkers) can get into buildings.  Or making sure websites are accessible so they work for people who can’t hold a mouse.”

“Why the hell would they want us to do that?” Frankie interrupts.

“You mean like how I can’t read so many websites because the colors are too light?” She wonders aloud?  “They could make the print easier to read!  Or even let me adjust it how I like it!”

“Or how I couldn’t hear the video I wanted to watch last night about making pot brownies?”  They could have had captions on that video!”

Tomlin starts getting really excited thinking about the accessibility options that would make her life easier.

Fonda rolls her eyes (again) at the mention of marijuana sweets (Grace’s drug of choice is alcohol). But she encourages Frankie’s enthusiasm.

“We’ll say yes,” she says, and begins thinking about the power point.

And there could be more

Once Grace and Frankie say yes to a usability, universal design, or accessibility conference, the possibilities are endless. There could be a whole episode on the conference itself where Fonda and Tomlin are stars to the young web developers and designers.

The could give the young ‘uns a lesson in the frustration of too small buttons and too little color contrast on their favorite mobile applications.   The show runners could make up apps perfectly suited for the mis-matched friends.  Maybe a meditation timer for Tomlin, or a sophisticated clothing site for Fonda.

Bringing Disability into the Focus Group

Fonda calls an old friend who assembles a group of five women to come over to Grace and Frankie’s (gorgeous) home on the beach in southern California.  The visitors are told only that Fonda and Tomlin want to share a new product.  But [spoiler alert] it turns out the focus group women are in fact from a bible study group.  Once the true nature of the afternoon tea is disclosed, the women leave in a judgmental huff.

The show missed an opportunity to expand the focus group and explicitly include disabled women.  Although society at large typically writes disabled women out of the sexual experience, that is simply a facet of pervasive ableism that fails to recognize disabled people as whole.  (Author and activist Anne Finger is one of many who has spoken of the “very real pain that’s happened to a lot of people around being desexualized.”  A bible thumping wheelchair rider could have offered one more lesson in the value of designing products for everyone.

Maybe it’s not too late.  Frankie wants their next product to be an easy open condom. (Yes, she admits she’s old, but she explains to Grace that her boyfriend, played by Ernie Hudson, is so hot that she can never be too careful.) It too will be universally designed.  The possibilities for disability-friendly story lines are endless.

Lainey Feingold is an author and disability civil rights lawyer in Berkeley California.  Her book, Structured Negotiation, A Winning Alternative to Lawsuits, tells about her work with the blind community to make technology available to everyone, all without lawsuits.  Grace and Frankie is the only TV show she has ever binge watched.  Learn more about Lainey’s work and her book on her website.