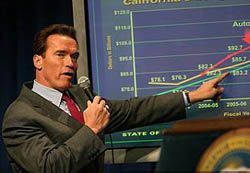 Governor Schwarzenegger told the Los Angeles Times on Friday that he intends to raise $50 million in support of his ballot measures for the November 2005 special election. While the Governor’s plan to redraw all legislative districts has gotten most of the attention, he also proposes a constitutional amendment that would impose across the board spending cuts whenever spending exceeds revenue. Since this has been the situation for years due to Republican opposition to any tax hikes, the Governor’s measure would likely make the currently inadequate spending on education, health care, and other social needs the high water mark for state funding. Activists and political leaders must begin organizing against the Governor’s proposal now.

Candidate Arnold Schwarzenegger spoke about creating “fantastic,” jobs, of improving the state’s public schools, and about increasing funding for environmental protection. But Governor Schwarzenegger has instead redirected job-creating transit funding to other uses, tried to cut state spending to education, and resisted new taxes while zealously protecting tax breaks for the rich.

Having raised $50 million to win the recall, Schwarzenegger now plans a nationwide fundraising blitz in support of his November ballot measures (the special election has not been officially approved, but will occur in November 2005). He has set a goal of raising another $50 million, with much of it coming from Wall Street firms. These businesses stand to make billions should voters approve the Governor’s measure to move new state employees from public pension systems into individual 401(k) investment plans.

The Governor’s proposed constitutional amendment to restrict state spending has received much less publicity than his reapportionment and pension measures. But it poses the greatest threat of all to progressive interests.

Here’s why. Under the Governor’s plan, across the board spending cuts would be automatically triggered if the Legislature and Governor do not reach a budget agreement by July 1. Since a 2/3 vote of both the Assembly and Senate is required, a small minority of right-wing Republicans could ensure that the July 1 deadline is never met.

The result: unless the state is in boom times, programs and benefits will be annually cut. And these cuts will disproportionately impact the millions of low-income Californians dependent on state aid and services.

State law currently provides automatic cost of living increases (cola’s) for the blind, disabled and other vulnerable groups who cannot compete with prison guards and other powerful interests for their rightful share of state funds. Under the Governor’s plan, such desperately needed benefit increases could be denied, and funding for health services and public schools would be slashed.

How ironic that the big, bad Terminator now feels so powerless that he must turn to automatic triggers to address the state budget crisis. A real action hero would break from his party and raise taxes to make up the deficit, but Arnold is a hero only in movies, not real life.

While the Governor zealously protects tax breaks for yacht owners, his budget cuts $100 million from the senior and disabled renters tax credit. He also seeks to save $195 million by reducing wages for in home support service workers caring for the disabled and frail elderly from $10 an hour to the state minimum of $6.75. When the Governor’s pledged to create “fantastic” jobs, most assumed he meant positions paying substantially over the minimum wage.

Schwarzenegger plans to go to “the people” to win support for his budget initiative, and progressives must begin developing their own strategy for defeating it. If past history is any judge, this task will be harder than it looks.

While California’s destructive Prop 13 was a high-profile campaign that rode massive homeowner support to an easy victory, state voters subsequently passed Prop 218 in a campaign that faced little grassroots opposition. Prop 218 was downplayed at the time because its spending limitations had no immediate impact, but it contained strong restrictions on the creation of assessment districts and has further hampered the ability of cities and counties to raise necessary funds.

Tax limitation measures start with a broad and solid base of support, which then expands to majority support through heavily funded advertising campaigns. Only a large grassroots opposition campaign, something that did not emerge against prior spending limitation measures, can defeat Schwarzenegger’s measure.

Three factors could help the building of a statewide grassroots anti-initiative campaign.

First, Californians are as angry as ever at Bush and will view Schwarzenegger’s measure as seeking to bring Bushenomics to our blue state. This is really a battle against the Republican’s anti-tax, cut spending mantra, and defeating it here could create momentum against such policies in other states.

Schwarzenegger admits that he sees his ballot measures as setting a national agenda. He told the Times, “We all know the issues we are addressing are not just state issues, that the rest of the country is looking at California and as California goes, so goes the rest of the nation.”

Second, by jeopardizing funding for virtually every state program, the spending caps directly threaten millions of Californians. This will facilitate the creation of a mass volunteer base, and bring the campaign sufficient money to fund the organizers necessary to properly focus activist energies. Groups like Move On, ACORN , and local, state and international labor unions can use their mobilizing prowess in California to send an important message to the nation.


Third, progressives learned from the recent presidential campaign how to use the Internet to raise money and recruit campaign volunteers. Move On performs this task better than anyone, but some person or group can use the upcoming election to create a desperately needed dailykos.com type site for state politics.

Many Bay Area activists spent the presidential election campaign working in other states, particularly Nevada. If this activist energy can be similarly harnessed around California’s November election, Schwarzenegger’s budget initiative will be soundly defeated.

Schwarzenegger gives his spending cap measure a high-profile leader whose words are reported in all media and who draws crowds throughout much of the state. Who will be the identified leader of the opposition? In the famous 1978 campaign to defeat the Briggs initiative that sought to ban gays and lesbians from being teachers, Harvey Milk debated Briggs across California and led the no side to victory. Who will be our Harvey Milk this November?

It better not be State Senate leader Don Perata. His questionable financial dealings make him a poster child for what voters do not like about Sacramento politics.

Unless a popular movie star steps up, Assembly Speaker Fabian Nunez may be the best choice. Nunez may be the only state legislator who can both build and statewide grassroots campaign and handle Arnold in one on one debate. Nunez is a product of the state’s public school system, and can counter Schwarzenegger’s ongoing narrative about his role as an immigrant in pursuing the California dream.

November is a long way off. Between Iraq, Social Security, Bush budget cuts, Muni fare hikes, and other international, national and local issues, it is tempting to forget about the Governor’s spending cap measure until campaigning begins in earnest after Labor Day.

But if opponents wait until then to begin revving up a grassroots campaign, the Governor will win. As distracted as we are by other pressing issues, the stakes this November are so high that time must be set aside now for strategizing on how this statewide campaign can be built.

While local voters can be expected to overwhelmingly oppose the Governor’s entire ballot package, the larger question is how many Bay Area voters will get to the polls. The Governor’s unlimited budget will allow for a sophisticated absentee ballot campaign; opponents need to get the resources, either financial or volunteer, to do likewise.

To facilitate this strategizing process in San Francisco, Beyond Chron is considering holding a forum to focus on strategies for November. Comments on this idea would be appreciated.