by Clark Sullivan, HempEvolution.org on October 27, 2006 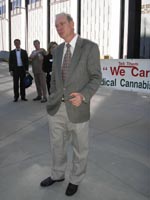 San Francisco, CA Oct 25, 2006 — In a major victory for medical cannabis patients, Judge Charles Breyer dismissed three counts involving marijuana cultivation against Richard Watts, ruling that the U.S. Attorney’s Office had violated the Speedy Trial Act. Judge Breyer, who sentenced Ed Rosenthal to one day in jail after previous trial, openly challenged Asst. U.S. Attorney George Bevan several times about the federal government’s justification for retrying Mr. Rosenthal and Mr. Watts. Saying the only question for him to decide was whether or not to dismiss the case “with prejudice”, Judge Breyer appeared annoyed that the government was continuing it’s prosecution of the case and remarked that he had already tried Mr. Rosenthal once.

Ed Rosenthal’s co-defendant, Mr. Watts, son of Buddhist philosopher Alan Watts, has been awaiting trial since his arrest in February 2002. However, due to a serious automobile accident later that year, Mr. Watts was not tried along with Mr. Rosenthal for their involvement with the 6th Street Harm Reduction Center. Nonetheless, Rick was declared competent to stand trial in May 2003, but the government failed to pursue it’s case against him and hoped that the superseding indictment, filed last week, would justify continued prosecution on the basis of new charges of money laundering and tax evasion.

Judge Breyer let the old conspiracy charge stand, along with the two new counts against Mr. Watts and suggested that the count of tax evasion be separated in a different trial for both defendants and ordered Ed and Rick to appear in U.S. District Court on December 6th, so he can decide how to proceed with the case.

Ed Rosenthal, noted cannabis expert and author, was previously convicted in 2003 of three marijuana-related counts but had his conviction overturned in April because of juror misconduct by the U.S. Court of Appeals for the 9th Circuit. The superseding indictment containing the new charges was issued by a recent grand jury in which two witnesses refused to testify, citing their 5th Amendment rights.