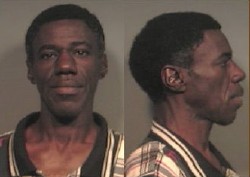 It’s classic Jean Valjean: An African American homeless man in Shreveport, Louisiana walks into a local bank and proceeds to inform the teller that it’s a robbery. He has a hand hidden under his jacket, as if he has a gun. Though the teller gives him three piles of money, the man only takes a hundred dollar bill. He needs it in order to pay for a stay at a detox center. He says he’s hungry and homeless.

Wracked by guilt, Digital Journal reports, the man walks into a police station the next day and gives himself up. For that, Roy Brown is sentenced to 15 long years in jail. Meanwhile, Bernie Madoff, a rich white money manager and former NASDAQ stock exchange chair, still sits in his mansion after allegedly robbing up to $50 billion from investors, including charitable organizations that have now gone under. With high-powered lawyers and a boatload of political connections, Madoff will never need to worry about how much the detox center charges.

Christian Milton, the vice president for reinsurance at American International Group, until recently the country’s biggest insurance company and a benefactor of Bush’s bailout for the rich, was given just four years in prison after being found guilty of massive fraud that cost the outfit’s shareholders over $500 million. How many times does 100 go into 500 million?

Everybody’s favorite lifestyle diva (who also happens to be white), Martha Stewart, was given the absolute minimum sentence possible under federal law (five months in jail) after she was convicted of shenanigans in the sale of stock. She served at a women’s minimum security prison in West Virginia that became known as “Camp Cupcake” in her honor. While she was serving her time, stocks in her company soared, making her lots of money. She even ended up with her own reality show after its host, Donald Trump, turned the mantle over to her.

“This country is all about second chances,” Mark Burnett, the producer of the show, told the British Telegraph in 2005. “That’s what makes it the greatest country in the world. People love redemption stories.”

How much will his stock go up while he serves his 15 years? What TV station will be waiting to give him a job hosting his own reality show? What publishing company will want his story, offering him a fat advance to share it with readers all over America?