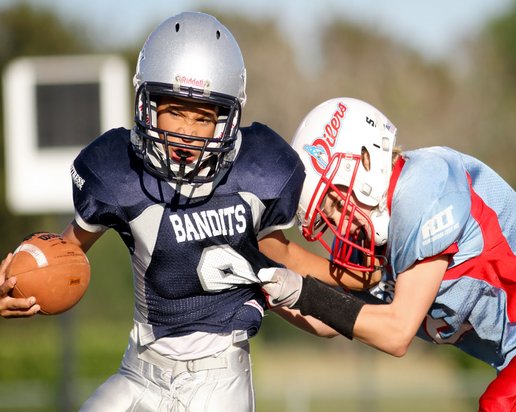 Give yourself diabetes while you’re trying to fix brain damage? That’s the question that came to mind reading this press release from the University of Maryland titled “Concussion-Related Measures Improved in High School Football Players Who Drank New Chocolate Milk.”  It touts a product called Fifth Quarter Fresh, a milk-based “post-workout recovery drink” which has 42 grams of sugar per bottle.

Health experts Andrew Holtz, Yoni Freedhoff and Kathlyn Stone reviewed the UMD press release and found it was unsatisfactory for nine out of the ten criteria.  They called it “out of bounds” saying:

“There are real consequences to PR spin of health research. If this story were to gain traction, it may further the health haloing of a beverage that drop per drop has more calories and more sugar than Coca-Cola.”

The recent release of the movie Concussion has generated a great deal of media attention to the issue of brain damage in sports.  It is based on a true story about a forensic pathologist’s efforts to get the National Football League to face the truth about chronic traumatic encephalopathy in order to prevent more players having to suffer from its destructive effects.

Now that pain is being used to help sell sugary milk.

Fifth Quarter Fresh’s marketing says “Protect the Brain,” and its product “may lower the risk of concussion-related symptoms.”  This fits with the many other dubious health claims Michele Simon documented in her report “Whitewashed: How Industry and Government Promote Dairy Junk Foods.” As she wrote, “While major food conglomerates reap sky-high profits from the sales of ‘junkified’ processed dairy products, they do so at the expense of public health.”

The UMD press release was for research that was funded by the Maryland Industrial Partnerships program, but does not appear to be published in any peer-reviewed scientific journal.

“The longstanding influence of food industry funding on nutrition research, researchers, and professional societies1 threatens the credibility of nutrition science. So much research is sponsored by industry that health professionals and the public may lose confidence in basic dietary advice.”

It also appears to reflect the problems Timothy Caulfield and Ubaka Ogbogu described in their article for BioMed Central Medical Ethics on the commercialization of university-based research:

“There is growing evidence that the pressure to commercialize is directly or indirectly associated with adverse impacts on the research environment, science hype, premature implementation or translation of research results, loss of public trust in the university research enterprise, research policy conflicts and confusion, and damage to the long-term contributions of university research.”

Based on the flimsy UMD research, schools are now giving Fifth Quarter Fresh to students while ignoring the reams of peer-reviewed and published research which show high- sugar diets increase the risk of chronic diseases like Type 2 diabetes, non-alcoholic fatty liver disease and cancer:

“There is nothing more important than protecting our student-athletes,” said Clayton Wilcox, superintendent of Washington CountyPublic Schools. “Now that we understand the findings of this study, we are determined to provide Fifth Quarter Fresh to all of our athletes.”

As a parent working to keep my children healthy, the health haloing of chocolate milk is a constant battle.  I send them to school with a sack lunch so they aren’t offered it in the lunch-line and have explained why the “Fuel Up To Play 60” ads they see in school do more to promote dairy junk food than their health.  When their swag bags from the Girls on the Run 5K contained “Got Chocolate Milk?” towels, I countered with the fact that pediatricians say children and teenagers should be drinking water because all that sugar can contribute to obesity and tooth decay.

The UMD press release presents a new low in academic research integrity at the expense of kids’ health, and parents expect better from our publicly funded universities.