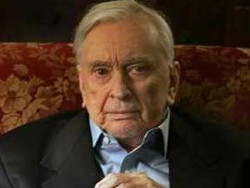 Gore Vidal loved America in the way that the best of the founders did. Indeed, he seemed at times, to be the last of their number — a fierce defender of the purest, most revolutionary of ideals at a time when the contemporary political class prattled on about Constitutional principles they neither understood nor valued. (At the bicentennial, in 1976, Time magazine featured a cover with Vidal in historic garb; an honor that delighted him sufficiently to earn a place for the cover on the wall of his Italian villa.)

Vidal, who has died at age 86, was a great man of letters, an author, playwright and groundbreaking essayist on the literature of his native land and the world. He was, as well, a bold and unrelenting challenger of the Puritanism that he regarded as the ugliest of American tendencies.

But I knew Gore as a political champion, who ran inspired campaigns for Congress, who demanded that presidents of both parties be held to account for high crimes and misdemeanors, who maintained a faith in democracy so deep and abiding that he called for a new constitutional convention to set right what was done wrong at Philadelphia and to realize the Jeffersonian requirement of revolutionary renewal. He was, as well, a scorching debater on topics political, as William F. Buckley learned to his chagrin in 1968.

Like most of Gore’s friends, I came to know him first on the page.

His epic 1972 essay “Homage to Daniel Shays” — written as misled voters prepared to reelect Richard Nixon; in confirmation of Gore’s observation that: “At any given moment, public opinion is a chaos of superstition, misinformation, and prejudice” — remains the greatest contemporary statement of radical Americanism.

It is where our relationship began. I loved Gore immediately, for his dangerous wit, for his savge style, for his truth telling. “Policy formation is the province of a bipartisan power elite of corporate rich [Rockefeller, Mellon] and their career hirelings [Nixon, McNamara] who work through an interlocking and overlapping maze of foundations, universities and institutes, discussion groups, associations and commissions,” he observed. “Political parties are only for finding interesting and genial people [usually ambitious middle-class lawyers] to ratify and implement these policies in such a way that the under classes feel themselves to be, somehow, a part of the governmental process. Politics is not exactly the heart of the action but it is nice work—if you can afford to campaign for it.”

It his homage to the organizer of Shay’s Rebellion, Gore imagined a “Property Party” — or, to be more precise, he renewed an old populist critique that employed varations on the term — that was made up of Democrats and Republicans with shared loyalty to their paymasters on Wall Street.

In Richard Nixon, Gore found the ugliest face — to that point, at least — of the Property Party.

“To maintain its grip on the nation, the Property Party must keep actual issues out of political debate. So far they have succeeded marvelously well. Faced with unemployment, Nixon will oppose abortion. Inflation? Marijuana is a halfway house to something worse,” he explained, in a soliloquy that, with the change of a few names and locations, remains fresh 40 years after it was written. “The bombing of North Vietnam? Well, pornographers are using the mailing lists of Cub Scouts. Persuading the people to vote against their own best interests has been the awesome genius of the American political elite from the beginning.”

“Property is power, as those Massachusetts veterans of the revolution discovered when they joined Captain Daniel Shays in his resistance to the landed gentry’s replacement of a loose confederation of states with a tax-levying central government,” Gore wrote in 1972. “The veterans thought that they had been fighting a war for true independence. They did not want London to be replaced by New York. They did want an abolition of debts and a division of property. Their rebellion was promptly put down. But so shaken was the elite by the experience that their most important (and wealthiest) figure grimly emerged from private life with a letter to Harry Lee. “You talk of employing influence,” wrote George Washington, “to appease the present tumults in Massachusetts. I know not where that influence is to be found, or if attainable, that it would be a proper remedy for the disorders. Influence is no government. Let us have one by which our lives, liberties and properties will be secured or let us know the worst at once.” So was born the Property Party and with it the Constitution of the United States. We have known the ‘best’ for nearly 200 years. What would the ‘worst’ have been like?”

Ah, now there was the question.

And a few paragraphs later came the answer: “here now exists a potential American majority willing to see its best interests served not through the restrictive Constitution of the elite but through the egalitarian vision of Daniel Shays and his road not taken—yet.”

Gore was a founder displaced. He believed that America was not made, but rather that it was in the making.

There was a righteousness to his faith, as is always the case with genuine radicals. He identified with the most righteous reformers, the populists and the progressives of the latter part of the 19th century and the early days of the 20th. He loved their determination to use electoral democracy to forge economic democracy. And he delighted in the prospect that, as one of his heroes Robert M. La Follette proposed, “the people shall rule.”

Gore found a venue for his political advocacy in the pages of The Nation, and a publisher in Nation Books. Gore and I came to know one another as members of The Nation caucus that sought to renew an anti-imperialist ethic that ran deep for the first century of the American experiment. We recognized that a nation that sought to be democratic in any sense could not engage in the imperialism of King George III or President George II.

Gore wrote the introduction to my book, The Genius of Impeachment: The Founders’ Cure for Royalism (New Press; 2006),opening with his announcement that, “Of course George Bush and Dick Cheney have committed acts that would merit impeachment. In a proper country, they would be tried as traitors. You don’t lie to a country, get it into a war, waste a trillion dollars, kill a lot of people all because of your vanity and lust for oil and admiration for your corporate partners. If that isn’t treason, I don’t know what is.”

Note that line about “a proper country.”

Gore spent much of his adult life in Ravello, an Italian redoubt to which he retreated with his beloved Howard during the Nixon years. It part, he went to Italy because he did not believe America to be a proper country. But when we would sit overlooking the sea in Ravello, the conversations would be, always, of the task of perfecting America.

Gore joked in 2000, when his distant cousin Al was seeking the presidency, that perhaps the wrong Gore was in the running.

“I think America will be ready for a real alternative to Bush by then,” Gore mused. “Think of Bush and Cheney as a cry for help. I shall answer my country’s call.”

The campaign never got beyond Ravello — though Gore always contended that Iowa caucus-goers would have gone for him. But there was something more than revelry to the talk of a presidential run. Gore Vidal’s political engagement was not merely literary or rhetorical. He stood seriously for the U.S. House representing New York in 1960, and for the U.S. Senate representing California in 1982. He could imagine himself as a legislator, in the traditional of his beloved grandfather, Oklahoma Senator T.P. Gore, an anti-imperialist of the last century. Had he won his campaigns, he would have served — as the founders did, not for position or prestige but for the purpose of making a republic worthy of Daniel Shays and the revolutionaries who did not believe it sufficient to replace the elites of London and Liverpool with the elites of New York and Washington.

This piece was first published at The Nation Magazine’s website.