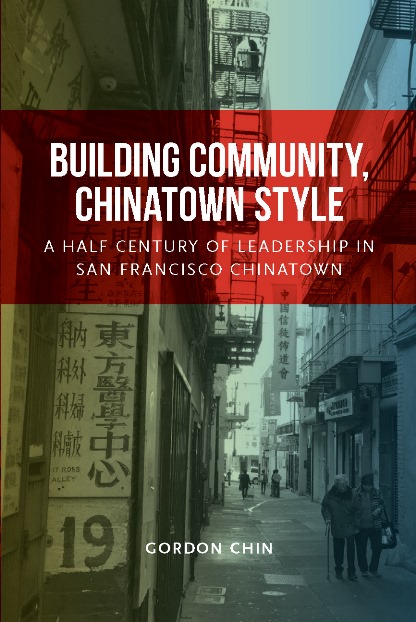 When Gordon Chin and fellow activists formed the Chinatown Community Development Center (CCDC) on April 1, 1977, San Francisco’s Chinatown was at risk. Powerful interests were out to transform the neighborhood, and that August saw the mass eviction (and later demolition) of the International Hotel on Chinatown’s border.

Chinatown desperately needed a new organization to organize residents and begin a community planning process. In an ominous parallel to the Tenderloin at that time, Chinatown’s zoning permitted forty story office buildings, which easily could have demolished much of the neighborhood.

Gordon Chin and a group of committed Chinese-American activists stepped into this neighborhood pressure-cooker. They formed CCDC, setting Chinatown toward a positive future. Today, Chinatown’s low-income housing stock and SROs have been preserved, improved and expanded. Its once filthy alleyways have been so transformed that they now attract tourists. Chinatown’s current zoning bans highrise development and many nonprofit organizations have worked to successfully preserve the neighborhood as a low-income community.

Many residents, activists, religious figures and business leaders helped create today’s Chinatown. But if you asked all involved who was the glue that brought everyone together for Chinatown’s benefit, nearly all would answer: Gordon Chin.

Chin has now written a book about his 34 year tenure at CCDC, “Building Community, Chinatown Style.” It is a must read for anyone interested in Chinatown’s history, and that of San Francisco from 1977 through today.

Chin was a product of the 1960’s. He got his activist start with the San Francisco State student strike that began on November 6. 1968. Chin participated in the large rallies and met his longtime partner, Dorothy Yee, on a picket line. Chin describes his experience as a “seminal experience for me and an important touchstone of my life.” It left him committed to working in Chinatown, a process he began while a student.

Chin student activism experience instilled in him a belief that helping Chinatown required reaching out to all segments of the Chinatown community. When he talks about “building community, Chinatown style,” he is referring to this broadly inclusive process. Chin never saw “building community” as simply “building a community of like- minded progressive activists.” Instead, CCDC always sought to bring together diverse stakeholders to reach common ground.

CCDC’s inclusive process is why on big campaigns, like the 1986 rezoning of Chinatown, both the business-backed Chinese Chamber of Commerce and Chinese Six Companies joined CCDC in backing the city’s rezoning plan. It’s how CCDC got support of property owners for its ambitious Adopt-an-Alleyway Youth Empowerment Project, the Central Subway, and the more than decade long effort to build affordable housing on the former International Hotel site.

Chin’s discussion of CCDC’s community building process is particularly timely in light of appointed D3 Supervisor Julie Christensen’s recent claim: “They (CCDC) kind of come out of the 1960’s protest era and I’m more of a negotiator and consensus builder. There are a lot of voices and a lot of people who have ideas about where Chinatown should go, and CCDC is not alone in having an opinion about how things should be.”

But under Chin and his successor, Reverend Norman Fong, CCDC has never sought or claimed to be the sole deciders for Chinatown. Christensen’s comments reflect a complete misunderstanding of the past four decades of Chinatown history; she needs to read Chin’s book.

Chin describes the early 1980’s as the period of “Chinatown land use wars.” I vividly recall the battles to stop evictions at 1000 Montgomery and Orangeland, which gripped the entire activist and tenant community citywide. Both involved phenomenal community organizing efforts by CCDC.

For these campaigns and others, Chin’s book will bring back a lot of memories. If you were not around during these historic struggles for Chinatown’s future, Chin’s description brings them to life.

I worked closely with CCDC in the 1980’s because the Tenderloin and Chinatown faced similar threats (that’s how I got to know then Asian Law Caucus tenant attorney Ed Lee). I describe in my new book on the Tenderloin how San Francisco’s pro-development political climate in the 1980’s put the low-income Tenderloin at risk, and the same was true for Chinatown.

In 1980, both neighborhoods had zoning that allowed highrise office development. Both had SRO hotels at risk from demolition or tourist conversion. Both faced major challenges from new developments. As in the Tenderloin, the 1980’s development battles brought Chinatown’s community organizing to a whole new level.

CCDC’s practice of reaching out to the Chinatown business community led Chin to forge a close relationship with Chinese Chamber of Commerce leader Rose Pak. The value of this alliance became clear around Orangeland, a project that would have evicted nearly 200 tenants in the heart of Chinatown.

It’s been nearly thirty years since the Orangeland fight, and I still recall the huge crowds of tenants at protests and the Planning Commission hearing. It was as emotional a hearing as I’ve seen. People’s homes were at stake and it looked like a crushing defeat for CCDC and the citywide tenants’ movement.

But Pak’s behind the scenes work at the Board of Supervisors changed history. She turned what looked like a crushing community defeat at Orangeland into a surprising 8-2 victory at the Board, stopping the mass eviction of Chinatown tenants.

Chin’s story reveals CCDC as a remarkable incubator for young activists. Those that passed through CCDC on route to other work included Howard Gong, Daryl Higashi, Brad Paul, David Prowler, Sue Lee, Melanie Young, Ilene Dick, D6 Supervisor Jane Kim, and many others. Chin amply credits the wonderful Enid Lim, whose Chinatown work was joined by her undercover efforts to help us stop tourist conversions in the Tenderloin.

While generously crediting others, Chin downplays his own central role. He describes his presence in Chinatown and citywide housing campaigns without noting that he typically chaired key meetings. Nor does he mention that people looked to him for strategic advice. Instead of promoting himself Chin believed in empowering his staff, which is why CCDC has attracted and retained so many talented activists through this day.

Gordon Chin’s new book offers the true history of how Chinatown survived as a low-income neighborhood. It wasn’t luck or good fortune—it was through CCDC’s organizing, community outreach, and coalition building, all of which created a model for community building that other neighborhoods can follow.

Gordon Chin has a book launch today (June 25) from 5-7pm at the Chinese Culture Center of San Francisco, 750 Kearny Street, 3rd Floor. The event is free to the public. This is a great opportunity to buy a signed copy of the book and talk with the author.

Randy Shaw is Editor of Beyond Chron. He discusses the Tenderloin’s long efforts to remain primarily low-income in his new book, The Tenderloin: Sex, Crime and Resistance in the Heart of San Francisco