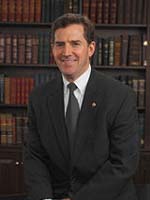 Several Republican Congress members are pushing to take away meals for kids in Berkeley, because they’re pissed that the City Council recently passed a resolution to send a letter telling local Marine recruiters that they’re “uninvited and unwelcome intruders.”

The motion was part of several that addressed military recruitment by the Marines in a city that in the wild and wonderful ‘60s was lovingly dubbed the “People’s Republic of Berkeley.” The City Council also called for the good citizens of Berkeley to protest recruitment by the Marines, and instructed the City Attorney to investigate whether the military’s antigay policy violates local laws banning discrimination based on sexual orientation.

To add icing to the cake, the City Council granted Code Pink, a women’s antiwar protest group, a regular bullhorn permit and a parking space in the front of the Marine recruitment office.

In denouncing the actions of the City Council, several conservative GOP Congress members introduced legislation into Congress to take away $2.3 million in federal grants to Berkeley that provides, among other things, 10,000 daily meals for school kids, offices for disabled organizations and a police and fire emergency communications system. The money would instead be given to the Marines.

According to Republican Sen. Jim DeMint of South Carolina, “Patriotic American taxpayers won’t sit quietly while Berkeley insults our brave Marines and tries to run them out of town.”

Berkeley Mayor Tom Bates was quick to issue an apology for the resolution and two Council members are planning to move to rescind the item that has offended the pro-military Congress members. Two California Congress members, Barbara Lee and Barbara Boxer, said that they would fight vigorously against the funding cuts.

I understand that conservative, pro-military Congress members, who obviously have no problem with “our brave Marines” going to other countries and killing civilians, including kids, are upset by the Berkeley City Council resolution. They want to punish the Berkeley legislators, pure and simple. As DeMint explained, every action has its consequences. Every Congressional action has its consequences, too.

If the majority of Congress goes along with the bully tactics of DeMint and company, it sends a clear message that local legislative bodies must keep silent about their feelings about military recruiters or face retribution. Either think like us or have vital services cut. There’s no democracy in that. What City Council will risk losing federal funds? It’s blackmail, pure and simple. In the Berkeley case, Congress members are holding hostage some of the America’s most vulnerable citizens.

As Ann Cooper, who directs nutrition services for the Berkeley School District, told the San Jose Mercury News: “Why anyone would want to take healthy food away from children is just beyond me.”

That’s how bullies are, Ann.