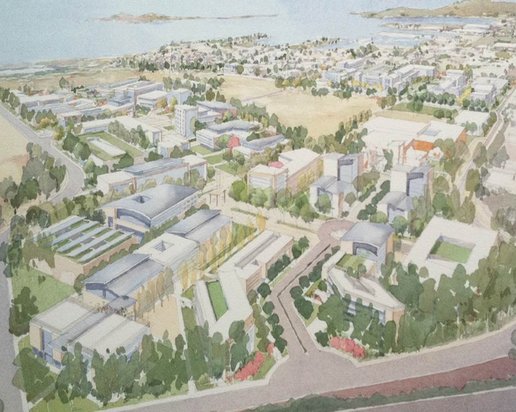 Members of AFSCME Local 3299 who in live in Richmond, CA. and work for the University of California in Berkeley have an urgent message for their neighbors:

“When the university plans a major expansion in our city, we need to get all its promises in writing!’

AFSCME activists base that sound trade union advice on their most recent contract bargaining –and on-going skirmishes–with the UC system. In 2013-14, it took more than a year of difficult negotiations, plus statewide strike activity, to win the collective bargaining agreement that currently covers 8,300 UC service workers.

Several hundred Richmond residents are employed in this bargaining unit. According to AFSCME, their labor has been so undervalued in the past that some of the union’s Black and Latino members at UC could even qualify for public assistance

Now, some AFSCME rank-and-filers are campaigning, with student and community allies, for a different kind of “CBA.” At meetings on campus, in local churches, and other venues, they are pressuring the university to sign a “community benefits agreement” that would apply to the “Berkeley Global Campus” (BGC) that UC-plans to build on the south Richmond shoreline, in partnership with private developers and the Lawrence Berkeley National Laboratories (LBNL).

In Richmond, AFSCME’s campaign partners include the Alliance of Californians for Community Empowerment (ACCE), the Contra Costa Interfaith Supporting Community Organization (CCISCO), and the Richmond Progressive Alliance (RPA). The RPA helped elect three of its own members to the city council last Fall and did voter turnout for Tom Butt, the city’s new mayor, and Jael Myrick, an incumbent city councilor who works for Assemblywoman Nancy Skinner. (See https://beyondchron.org/crude-effective-big-business-air-war-fails-sink-richmond-progressives/)

Like their counterparts in economic development fights across the country, the coalition lobbying UC has a long list of demands. These were embraced by the new Richmond Council, on paper at least, in late February. By a 5 to 1 vote, city councilors, including new mayor Tom Butt, urged “UCB to reach a legally-binding agreement with community stakeholders” that would commit the BGC to local hiring, job training, and “living wage” standards; use of unionized construction labor; respect for collective bargaining rights of campus workers; use of local businesses as vendors; and creation of an “anti-displacement fund to subsidize the development of affordable housing units and protect low income tenants” from gentrification of adjoining neighborhoods.

Of particular concern to AFSCME members is the threat of contracting out at the BGC. “UC likes to staff with temporary contract workers,” says Luster Howard, a Richmond resident and executive board member of Local 3299 who earns $60,000 a year as a driver for LBNL. “I have friends and family who need job opportunities. We already have plenty of ‘McJobs” in Richmond. We need better ones.”

If Chancellor Nicholas Dirks’ sweeping vision of the Richmond project attracts sufficient private capital and unfolds on schedule, the BGC could be Richmond’s largest employer within a decade—with a bigger workforce than Chevron and Kaiser. The new educational and research complex Dirks wants to create would be its biggest expansion in 147 years, adding 40 percent to UCB’s existing campus infrastructure.

According to Dirks, the BGC will function as an “international hub where some of the world’s leading universities and high-tech companies will work side-by-side in a campus setting…advancing knowledge in bioscience, health, energy development, and data studies”—all funded by hundreds of millions worth of private investment. Dirks and other BGC boosters have likened the project to the Kaiser shipyards in Richmond–a huge, if temporary, job creator for women and African-Americans during World War II. They foresee it becoming a “catalyst for developing the city’s shoreline into a vibrant mixture of high-intensity light industrial, commercial, and residential uses.”

BGC planners have been smoothing the way for the project via what UCB Community Relations Director Ruben Lizardo calls a “transparent and inclusive community advisory process.” Last fall, the university appointed a twenty-member “working group” that holds monthly meetings in Richmond, open to the public, where proposals related to employment, procurement, workforce training, and education are discussed.

The city of Richmond, local business, two labor councils, faith-based and community organizations (including CCISCO) are all represented on the working group. According to Lizardo, its “submission of actionable recommendations to UCB and LBNL” is due by the end of this year.

One emerging community concern is BGC’s future impact on the local housing market. As BGC development manager Terezia Nemeth told The SF Business Times last week, one of the main “benefits of the Richmond location is that there is housing available. That is probably the most reasonably priced housing in the Bay Area at this point.”

How long rents and housing prices will remain that way for existing residents is a matter of growing local concern. Lizardo promises that his BGC working group will be addressing affordable housing issues and “evaluating strategies to mitigate displacement of local residents.” To aid its deliberations and educate the community about available policy options, the Berkeley-based Haas has produced a glossy 50-page study entitled “Anchor Richmond” about the potential costs and benefits of the BGC.

Co-sponsored by ACCE and CCISCO, this well-researched report makes the case for a binding community benefits agreement that goes well beyond the “joint statement of commitment” signed by Dirks last year. The report authors—Eli Moore, Nadia Barhoum, and Alexis Alvarez Franco—urge UC to follow the example of other public or private development projects where the potential for displacement was recognized and affordable housing incorporated into the overall construction plan or expanded off-site through linkage fees.

It’s not clear which approach BGC planners favor, if any. At a recent Richmond “housing summit” sponsored by the Haas Institute, City Manager Bill Lindsay, a member of the BGC working group, reported that top UC officials had told him: “We don’t do housing—we rely on local policies to complement what goes on, on campus.” Tom Butt, Richmond’s new mayor, has also expressed doubts about the “displacement fund” recommended by the city council in February.

According to Butt, “there are a lot creative ways UC and Richmond can collaborate to address affordable housing, but a cash transfer is probably not going to be one of them.” In a recent exchange with ACCE, he chided the organization for failing to understand “that UC Berkeley is not Chevron. It is a cash-strapped public agency with limited resources. If UC Berkeley funds housing in Richmond, it has to come from somewhere….[I]t would probably come from raising student fees. “

Local 3299 President Kathryn Lybarger, a former UCB gardener recently elected president of the California AFL-CIO , disagrees with Butt. “UC is a really big institution, with the ability to do the right thing for Richmond,” she told a campus meeting in February. “They’re not strapped for cash.”

Recent student protests, targeting UC’s Board of Regents, have stressed both opposition to tuition hikes and support for the Richmond community benefits campaign. Several dozen students personally jousted with UC President Janet Napolitano, before being evicted from a Regents meeting in San Francisco last month. Their flyer publicizing the action accused UC of trying to make “profits on the backs of low-income people of color.” Some stood on chairs, stripped off their T-shirts, threw fake money, and chanted, “Raise up Richmond, not tuition!”

At an informational meeting, on campus, before that protest, members of the UCB Student Labor Committee got a moving pep talk from Maricruz Manzanarez. Orphaned as a child, she emigrated from Mexico and was an undocumented worker for many years. She’s now a Richmond home owner and mother of three who became active in Local 3299 after getting a custodial job at UCB.

“I came up from nothing to make a life in this country that would be better for my kids,” she told her student allies, warning that it will take much more pressure on UC to get a community benefits deal that’s legally enforceable.

“ We have to make it happen,” she said. “They’re not going to do it out of good will. Students, community, and the workers–we need to make them do it.”

(Steve Early is a Richmond resident and member of the city’s Progressive Alliance. He is the author, most recently of Save Our Unions, from Monthly Review Press, and is currently working on a book about recent progressive policy initiatives in Richmond. He can be reached at Lsupport@aol.com)