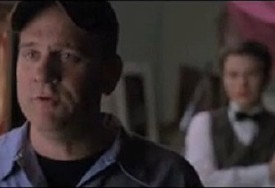 The FOX TV series Glee broke new ground this week, and it’s not because they had a Lady Gaga episode. As any viewer who watches the show would know, that idea was just painfully predictable. No, the highlight of the episode (which can be viewed here) was when Kurt’s father – played by Mike O’Malley – stood up to Finn for using the word “faggy.” Watched by over 11 million viewers, you can’t help choking up at the scene – and wish that every gay teen had a Dad like Burt Hummell. But for a show about a high school choir that is popular in the LGBT community, there is much more Glee can do to move hearts and minds. Kurt has a tough time growing up in Lima, Ohio – beaten up at school by the jocks, while coping with his own identity. It raises the question: why do we never meet Rachel’s “two gay Dads,” and wouldn’t they be terrific role models for Kurt?

O’Malley’s speech had raw emotion, and the actors must have known it would have an impact. “Reading it on paper I had no idea it was going to be that intense,” said O’Malley. “But once I got into it, then I kind of realized, ‘Oh, there’s such a bigger meaning behind this. Oh my God, this is so dramatic.’”

It was dramatic, alright. But moreso, it can have a transformative effect on how people view their own homophobia. When a two-minute clip of the speech was featured on the LGBT blog Towleroad, readers who had never before watched Glee vowed to start seeing it regularly – and the video circulated widely on YouTube.

Kurt’s Dad – a mechanic in their small town – had in prior episodes bonded with Finn over watching football. Dealing with homophobia had taken him years of struggle, and his speech put any high school jock who makes slurs about gays and lesbians to shame.

Kurt pleads that Finn “didn’t mean it that way” when he called his furniture “faggy,” but Kurt’s Dad knows better having lived and acted the way Finn does now. When you get older, he explains, “you start to see hate in peoples’ hearts … even the best of people.”

There are millions of people who honestly believe they are not bigots (some will even say they “have gay friends”), but still voted for Proposition 8 in California – or Question 1 in Maine. They may be “the best of people,” as Kurt’s Dad said, but they still have hate in them – unresolved homophobia that is rooted in fear, and manifests itself very discreetly.

Probably the best witness in the recent Prop 8 trial was San Diego Mayor Jerry Sanders – a liberal politician who opposed gay marriage, until his daughter coming out made him realize his tolerant views on civil unions were just “clouded in prejudice.”

Kurt’s Dad brought the whole issue home, and over 11 million people watched it on TV.

Of course, those who have seen prior episodes know that Kurt’s conduct is reckless and manipulative. Finn was wrong to call him a “fag,” but he had good reason to be angry.

Kurt has a crush on Finn (a straight, handsome football jock), and deliberately set up his single Dad with Finn’s single Mom so the families can move in together – and the two boys would then share a room. Anyone could tell this was not going to turn out well.

But Kurt’s outlandish behavior is really a cry for help that a lot of gay kids go through. He’s an insecure 16-year-old who does the kind of stupid things that teenagers often do. Add the fact that he’s coping as a gay kid in conservative Lima, Ohio – and he’s a mess.

Kurt’s lucky to have a father who loves and respects him for who he is – but many teens like him end up committing suicide, or get sent off to conversion therapy to “cure” their homosexuality. In a prior episode, Quinn’s parents – who are devoted fans of Glenn Beck – banish their daughter from the house when they discover that she’s pregnant.

What Kurt really needs are positive gay role models – adults who have found happiness in their lives, and could steer him from his reckless behavior. Which brings up one big frustration I have with Glee, even though I love the show and watch it religiously.

Rachel Berry – the ambitious lead singer in the Glee Club – has been raised by “two gay Dads” who adopted her. The first episode briefly showed a picture of them – but after twenty episodes we have yet to meet them, while we’ve already met the parents of Puck, Quinn, Kurt and Finn. They appear successful – Rachel lives in a nice house in the small town, and they are “active in the ACLU” – but we still don’t know much about them.

Even though know we haven’t met them, Rachel’s Dads are proof that Kurt is not the only gay person in Lima, Ohio. It would be great to foster a positive relationship between them.

In this week’s episode, Rachel discovers and meets her birth mother – Shelby, who’s the coach of a rival glee club at a nearby high school. Rachel struggles emotionally through the episode about having grown up without knowing her mother. At the end, she realizes that after 15 years Shelby may be her birth mother – but she can never be her “Mom.”

Gay marriage opponents are getting creative – and this subplot reminded me of what Jennifer Morse of the right-wing National Organization for Marriage recently argued at a forum on same-sex marriage that I attended. Marriage, she said, is about starting a family with children – and having gay couples starting a family “deprives” children of having a Mom and a Dad.

Given how shameless these bigots are, I would not be surprised if N.O.M. uses Rachel Berry as an “example” of why kids should not be reared by gay parents. And it’s certainly true that many adopted children develop a yearning to discover who their biological parents are.

So let’s meet Rachel’s gay Dads, and learn what a great job they did raising her. And let’s have an open debate with N.O.M. about what kind of teenagers are more at risk:

Kids like Rachel, who have been “short-changed” by not having a Mom and Dad?

Or children like Kurt, who grew up knowing they are gay – but live in conservative small towns where they risk hate and harassment every day, and can even be driven to suicide?

And in Kurt’s case, they will grow up knowing that if they ever find true love, they can never marry that person to start a family – an ambition that every child (gay or straight) grows up having.