Giving Thanks to Some Who Made a Difference 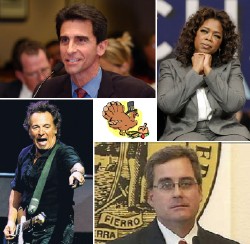 As Thanksgiving approaches, we offer thanks for those who have endeavored to improve the world this year. Topping our list is the millions who cast a vote for change on November 4, and the hundreds of thousands who gave money, time, and often redirected their entire lives to set the United States on a new direction. The surest route to greater social justice lies less with a particular candidate than with greater civic engagement, as politicians are forced to become more responsive when sufficient numbers participate in the process (George W. Bush defied this ironclad rule, and became the most unpopular president since polling began). Here are some of the many at the local, state and national level that deserve our thanks this holiday season.

Dennis Herrera: San Francisco Mayor Gavin Newsom has gotten most of the attention over the gay marriage issue, but City Attorney Dennis Herrera has played an equally pivotal role. From the initial legal strategy that led to the California Supreme Court victory, to the assembling of a strong coalition for the new legal challenge to Prop 8, Herrera has transformed our local City Attorney’s office into a statewide force for change.

Mark Leno: Leno had the political courage and integrity to take on a “third rail” of California politics: challenging a Democratic political incumbent. Many local activists cared little about Carole Migden’s ineffectiveness in Sacramento, focusing only on her capacity to get some politicians’ free billboard space from her friends at Clear Channel. Leno took the heat, won in a landslide, and now ensures that a progressive and tenants’ hero will be representing San Francisco, Marin and Sonoma Counties for the next eight years.

Elaine Zamora: The Tenderloin is a safer, cleaner and more organized neighborhood because Zamora, who heads the neighborhood Community Benefits District (CBD) insists on it. Zamora’s passion for improving the Tenderloin has proved infectious. I’ve learned over my own 28 years in the Tenderloin that the two key factors are leadership and property owner involvement — Zamora has brought both.

Sister Bernie Galvin: She retired from Religious Witness with Homeless People this year, beginning a well-earned sabattical. If you missed our tribute to her, you can read it here.

Becky O’Malley: The founder and editor of the Berkeley Daily Planet is a controversial (and, in some quarters, quite unpopular) figure whose strong views trigger equally strong responses. But she and her husband are financing a newspaper that makes public debate about Berkeley and Oakland issues possible. Without the Daily Planet, Berkeley residents would be completely in the dark about local issues, while Oaklanders would have no counterpoint to Chip Johnson’s weekly anti-Dellums bashing in the San Francisco Chronicle.

UNITEHERE: Its California operation deserves public thanks for it financial contributions and tireless work against Prop 8. The union launched a boycott against a San Diego hotel whose owner contributed $125,000 in support of Prop 8, and played a central role in building Latino opposition to the measure.

California labor unions, and particularly the Los Angeles County Federation of Labor under the leadership of Maria Elena Durazo, have not gotten sufficient credit for Latinos dramatic shift in opposition to gay marriage since Prop 22 in 2000 — they worked hard on the campaign and deserve our public thanks.

Karen Bass and Darrell Steinberg: What a difference these two have already made in the short time since they have replaced Fabian Nunez and Don Perata as heads of the State Legislature. Bass consistently articulates a progressive alternative vision to that of our Governor, and neither have the negative baggage of their predecessors. Times are tough, but Democrats now have quality leadership representing their interests.

The No on 98 Campaign: It seems like a very long time ago, but earlier this year there was a real fear that a low-turnout June election could end rent control in California. But thanks to all of the groups and people who worked to defeat Prop 98, it lost in a landslide.

Considering that a similar measure was trounced in 1980, it appears clear that rent control is not even unpopular in cities lacking such regulations; in fact, a measure that opponents once charged as “communist” now appears mainstream.

Howard Dean: We cannot thank him enough. Despite some efforts to diminish the impact of his 50-state strategy, activists know the truth. Let’s hope he gets a suitable position for his talents in the Obama Administration.

Bruce Springsteen: What other top recording act over the past fifty-plus years has performed in free public events for a national political candidate? Bruce Springsteen stands alone, doing so for Kerry in 2004 and in multiple events for Barack Obama in 2008. And Springsteen does not disguise his progressive politics, speaking openly of his views on stage.

A transformational Obama presidency must impact mainstream culture, which means artists no longer jeopardize their careers by taking progressive stands. Springsteen, like the Dixie Chicks before him, is helping to make this a reality.

Oprah Winfrey: Histories of the Obama campaign will note that his once promising candidacy appeared to be stagnating in the fall of 2007. Barack Obama had fallen behind by double digits to Hillary Clinton in the polls, and many of his funders were nervous.

But on the weekend of December 9, 2007, Oprah joined Obama in campaign appearances in Iowa, New Hampshire and South Carolina that galvanized the nation. Winfrey had endorsed Obama in May, but now announced to her massive fan base that “I am here to tell you, Iowa, he is the one. He is the one!”

The Obama campaign never looked back. Some will argue that Obama’s campaign was always designed not to take off until mid-December, but Winfrey brought it a new level of credibility, optimism and energy. After all, she had never previously endorsed a candidate, so her backing for Obama was seen as coming from her heart.

Winfrey lost viewers and magazine readers as a result of her principled stand, and deserves thanks for being willing to sacrifice her “brand” for the greater good.

Evo Morales: The first indigenous president of Bolivia, the poorest country in South America, Morales has done everything in his power to address his nation’s gross economic inequality since taking office in January 2006. As the country’s wealthy interests sought to de facto secede from Bolivia in 2008, Morales kept his cool and earned even greater respect from other leaders in the region.

In October, the Bush Administration cancelled a $150 million trade deal with Bolivia. This further hampered Morales’ economic development efforts, and reversing this decision should be among the Obama Administration’s early acts.

If you do not know much about Morales — and even if you do, but have not seen this film — I cannot recommend strongly enough the video, Our Brand is Crisis. This 2005 film of how James Carville and other U.S. political consultants tried to impact the 2002 Bolivian election, and Morales’ response to their efforts, is an absolute gem.