Giving Thanks to Indian Hotel Owners 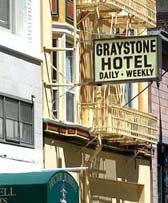 In all of the newspaper coverage of Care not Cash and city supportive housing programs, a key fact is consistently omitted: the identity of the owners willing to lease their hotels for city homeless programs.

This omission is no accident. Much of the media is apparently uncomfortable reporting that all but one of the dozen hotels in the Department of Human Services Leasing Program are Indian owned, and that many of the owners have the surname Patel.

The media has no hesitation identifying Indian owners named Patel when the story is about bad housing conditions, but seems incapable of saying anything positive about these Indian families. This weeks highly complimentary stories about the opening of the Graystone Hotel—described in the Chronicle as the “gem” of the Care not Cash program*failed to identify Alex Patel as the owner. Previous front page Chronicle stories on the Seneca and Royan hotels praised the hotels without noting that Dipak Patel owned the former and Barry Bhakta the latter.

Some suggest that owners are not mentioned because they should not be praised for simply making a business deal. But if cold cash was all that was at issue, the city’s many non-Indian hotel owners would also be pursuing lease agreements with nonprofit groups. Others think that the media fears the public will not believe the hotels could be of high quality if owned by a family named Patel. If true, such racist assumptions must be confronted.

The truth is that many Indian hotel owners like the idea of doing something good for the poor, and leasing for homeless programs gives them a good profit as well. Many of the owners are deeply religious and feel obligated to financially contribute to hospitals and programs for the disadvantaged both locally and in India. If the media ever took the time to get to know some of the owners in the leasing program they would find that maximizing their profit*which is the American way– is not their primary goal.

Over the past two decades, the vast majority of residential hotels seeking to convert to tourist lodgings*both legally or illegally*have been non-Indian owned. Had the Indian community followed the lead of other hotel owners, San Francisco would not have access to thousands of SRO rooms for its low-income residents.