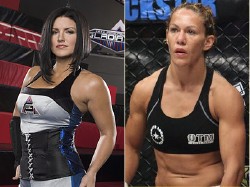 I don’t think I’ve ever seen as many couples at a sporting event. This was like a real-life chick flick with an unhappy ending, as Cyborg won convincingly by technical knockout with a single second left in an action-packed first round. The main draw of the nine-fight card, which made for a big-event atmosphere you can’t manufacture with smoke and mirrors, thus also proved the most entertaining match, by far.

Initially, MMA live can be a disorienting postmodernist experience. Even from press row, a mere dozen rows back, it is almost impossible to perceive much detail through the octagon cage, especially when the fighters hit the ground. You learn to follow the action mostly via the many supersized overhead monitors, and track the crowd reaction (which as often as not is fool’s gold) for the most effective strikes, throws, mounts, and submission moves. Boos accompanying lulls in offense also goad the performers into adrenaline mistakes of commission.

But the profound personal connection fans feel with their favorite fighters is undeniable. Here is where MMA less resembles the boxing/pro wrestling hybrid that is so often cited, and more travels the blue-collar trail blazed by NASCAR. On the Saturday undercard, a Fresno lightheavyweight, Mike Cook, got knocked silly by Scott Lighty of San Luis Obispo. Out on his feet, Cook doubled over from a kick to the gut and shook his head, and the referee stopped the bout after one more head shot. Minutes later, walking down the aisle back to the dressing room, Cook was waylaid by a blonde who asked him to pose with her while the woman’s boyfriend or husband snapped away on his cell phone camera. Cook obliged with a warm smile.

With girl-next-door looks and charm, while also making her mark as a top-tier bad-ass cager, Carano is a once-in-a-generation talent. But no one goes undefeated in this sport, and Saturday she met her match for the first time in eight fights. Cyborg is bigger-boned and longer-reaching, and has superior skills in just about every phase, even though Carano is herself a world-class boxer and Muay Thai striker. As the women traded blows and kicks, and took each other to the ground and against the cage, perspiration ran in rivulets down the gutters of their corn-row braids.

But the five-minute round (up from the usual three-minute women’s MMA rounds) favored the Brazilian android over the American cutie. Gina seemed more caught up in the history and the hype, more unwisely determined to use every weapon she knew all at once, more tactically unfocused – in sum, overwhelmed by her opponent. When she got to her feet following the mildly controversial ref’s stoppage, Gina flashed her trademark dimpled smile and graciously hugged her conqueror.

Carano did not attend the post-fight press conference – unusual for a main event loser though far from unprecedented. Strikeforce CEO Scott Coker said he did not know where she was. She may have been depressed, injured, deferring to Cyborg’s big moment, or reluctant to have her puffed-up movie-star features photographed at will.

As Carano ponders her future, she has to be wondering how much more of this she needs to take. Women’s MMA is big and growing, but she, and now Cyborg, remain the only names really known by the general public. With a reset button and the right set of fresh foes to build to a Cyborg-Carano II, the first female main event on the pay-per-view gravy train is a viable possibility a year or so down the road – even if the result is unlikely to be much different.

Irvin Muchnick is author of the forthcoming CHRIS & NANCY: The True Story of the Benoit Murder-Suicide and Pro Wrestling’s Cocktail of Death, and lead respondent in the current Supreme Court writers’ rights case, Reed Elsevier v. Muchnick. He tweets at http://twitter.com/irvmuch.