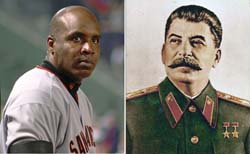 After Joseph Stalin seized control of the Soviet Union, the official history of the Bolshevik Revolution was altered. Onetime heroes were redefined as traitors and counter-revolutionaries, creating a pattern of erasing/rewriting of history that continued through the 1980’s. I don’t know if the owners of the San Francisco Giants studied Soviet history, but the team’s treatment of Barry Bonds is consistent with this legacy. Not only are Bonds’ accomplishments disparaged and/or ignored, but now the team’s broadcasters are claiming that the current Giants team is superior to those in the past because Bonds undermined the fighting spirit and hustle of fellow players. Funny how we never heard how Bonds was hurting the team during his 15-year tenure, a period in which he often carried the team on his back. Do the Giants think fans have entirely forgotten the past, or is the rewriting of Bonds’ history simply a desperate strategy to convince fans to pay to see a losing team?

On his pre pre-game show last Saturday, KNBR’s Mychael Urban was describing why the current Giants were so much more fun to watch than when the team had Barry Bonds. Stating that Bonds did not play all out, he said that this impacted the team’s fighting spirit, as the rest of the players follow the leader.

In contrast, Urban noted, the current Giants have never say die leaders like Aaron Rowand and Benjy Molina. This, in Urban’s view and that of his co-host, explained why the team was able to score five runs in the 9th inning against the Cubs on the Saturday before the All-Star Game (a game the team lost). Both commentators said that such comebacks make the current year’s team so much more fun to watch than last year’s team with Barry Bonds.

There are so many problems with this analysis that one hardly knows where to begin. And whereas Soviet leaders could rewrite history books to fit their agenda, the San Francisco Giants are stuck with some uncomfortable facts in their attempt to denigrate Barry Bonds.

The notion that Bonds hurt the Giants by a lack of hustle is a strange concept, given the team’s record during nearly all of his tenure. Bonds was second only to Babe Ruth as the most dominant offensive player in the history of baseball, and, unlike Ruth, he did not have Lou Gehrig hitting behind him and other future Hall of Famers in his starting lineup.

Urban, who is solid on the facts of the game, ought to check the Giants record in the years before they acquired Barry Bonds. Those pre-Bonds teams, like the current one, may have had “hustle,” but this did not translate into victories.

Were the Giants quitters during the Bonds years? I sure never heard them described as such on KNBR.
Nor did I hear Bonds criticized for lack of hustle. Most recognized that Bonds was doing what he needed to do to perform, and I do not recall a single instance prior to 2007 (when he was not physically up to par) where lack of hustle by Bonds cost the Giants a game.

This is not about defending Bonds’ use of steroids, or the fact that he often behaved as a colossal jerk. Rather, it is about the Giants attempting to act as if Bonds was not the straw that stirred the team’s drink for nearly 15 years, and that he set a record for winning most valuable player awards during this period.

Wonder how KNBR and the Giants explain Bonds winning MVP awards while they now claim he was hurting the team. It is this type of refuting of the documented historical record that makes the rewriting of Bonds’ history so Stalinesque.

The main reason the Giants are denigrating Bonds is to convince fans that this year’s steadily losing team is worth seeing. Hearing Urban and his colleague rhapsodize on the Giants 9th inning comeback, one could almost forget that the team has among the worst records in baseball.

Oh, excuse me. I have not noted, as every Giants employee appears required to do, that when Urban made his comments the team was “only” seven games out of first place.

When Barry Bonds was in his prime, fans were satisfied with nothing short of the World Series. But just as Soviet leaders had to rewrite history to explain food lines and declining wheat crops, so do the Giants have to justify the mess they have made of their franchise.