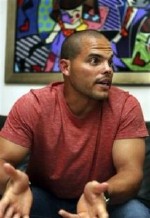 I know that there are many long-suffering San Francisco Giants fans frustrated as can be with the team’s failure to sign Manny Ramirez. The fact that one of baseball’s best hitters was there for the taking, and that the Giants could have cast a fatal blow to the Dodgers chances, has left fans both fuming and incredulous. For these fans, Giants GM Brian Sabean is the baseball equivalent of Bernie Madoff, with the team as one big Ponzi scheme. But all hope is not lost. Chronicle beat writer Henry Schulman reports that the Giants are exploring acquiring a future Hall of Fame catcher, a player with a great track record of taking teams to the World Series. And, most fittingly for the Giants, the man known in his steroid days as “Pudge” and now only as “Ivan” Rodriquez comes real cheap.

It’s been quite an off-season for the San Francisco Giants.

I don’t know of any team that has done a better job of acquiring past their prime stars.

Our Giants now can trot out certain first ballot Hall of Famer Randy Johnson, and Edgar Renteria, once one of the game’s top shortstops. But the team did recently release Dave Roberts, who did nothing for the Giants but whose place in baseball history was secured when his stolen base for the Red Sox in Game Four of the 2004 series with the Yankees paved the way for that team’s first World Series win since 1918.

Now the team could make up for its loss of Roberts, and boost its lineup of baseball lore, by adding Ivan “Pudge” Rodriquez.

Don’t get trampled in the rush to buy season tickets.

Because I was among those head in the sand types who defended Barry Bonds against steroid allegations during his boom years, I also failed to put two and two together when Pudge Rodriquez exhibited power stats unheard of for catcher of his age. I bought the line that he had undergone a major conditioning program.

Unlike Sosa, McGwire and others, Pudge had been good in his pre-steroids incarnation. But recall where he played from 1991-2002: the Texas Rangers, where A-Rod, Rafe Palmiero and much of the entire team were juiced.

Now that Pudge is no longer pudgy – and is actually trim – and can no longer hit homeruns – he had seven in 2008 – he is a perfect fit for the San Francisco Giants. He is a great clubhouse guy, a solid team player, and can be a mentor to Buster Posey, the team’s young catching hopeful.

Some will argue that, at age 38, Rodriguez is still a year or two away from being a perfect fit for the Giants. But recall that the team is on a youth movement, so getting him before he hits 40 is consistent with its new philosophy.

A Johnson- Rodriguez battery will bring fans flowing through the turnstiles. And that’s important, as the Giants current daily lineup may well be the most boring in baseball, giving peanut vendors little to do on days when Tim Lincecum is not pitching.

As the Giants join the A’s in bringing back over the hill stars – the latter even signed Jason Giambi, for goodness sake! – they seem to have forgotten that the dot com boom is gone, as is the novelty of AT&T Park. It’s now about winning. And while Giant fans can take solace in the relative weakness of division rivals, the fact remains that the Dodgers go out and get the players they need to win, and our San Francisco team does not.