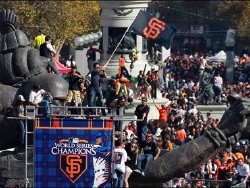 Bay Area residents seemed happier this week, which is likely a result of what happened last Sunday: the 49ers pummeled the Packers in Green Bay, the Giants beat the Dodgers and now have a 7 game lead, the A’s kept their winning ways and Bay Area favorite Obama got a large post-convention bounce. I have not heard so much 49ers talk since the Joe Montana, Jerry Rice, Steve Young days, and not since 2002 have the 49ers and Giants been at an elite level at the same time. The A’s surprising season has become a major national story, but local fans displeasure with the Fisher-Wolfe ownership group still keeps them attending games. Yet people are again talking about the team, and an ownership change would find attendance skyrocketing. But before concluding that the Bay Area is undergoing a sports renaissance, don’t forget: we still have the Warriors and the Raiders.

The first full post-Labor Day work week is usually not the happiest of times, but Bay Area sports fans have been absolutely gleeful. The 49ers physically dominated the Packers in Green Bay, the Giants now have a seven game lead over the Dodgers , and the A’s surprised the Angels to continue their unexpected wild-card run.

What a week it has been. And the Raiders’ dismal Monday night performance failed to dampen spirits. The team’s fan base is fervent, but too small to impact the area’s mood.

The 49ers were my pre-season NFC Super Bowl pick (to face the Broncos) but I did not think they would beat the Packers in Green Bay in a season-opening game. Not since the George Seifert-Steve Young era have the 49ers have been viewed as Super Bowl favorites this early in the season.

And with Jim Harbaugh proving a worthy successor to Bill Walsh and Seifert, the 49ers future is bright. This will return us to the days when the best time to avoid grocery lines was during 49er games, and when people poured out onto sidewalks after games ended.

The Giants are also in a great place, thanks to Marco Scutaro and the surprising revival of Joaquin Arias and Brandon Belt. The team’s starting pitching must get back on track for a long playoff run—Mike Krukow always attributes these bad starts to “mechanics,” but this mechanical problem has lasted all season for Lincecum and now afflicts the rest of the staff—but there are no great teams in the National League this year (recall that the Phillies were supposed to be such a team before the Giants beat them in 2010).

My circle of Giants fans all think Pablo Sandoval needs to be benched until he gets in physical shape to play. Arias is a much better fielder and a better hitter than the current version of Panda, who appears to be following his script from 2010. Bochy benched him last night, and should keep him there until Arias stops hitting.

Considering I picked the Angels to go to the World Series, to say that I am surprised at the A’s likely beating them out for a playoff berth is an understatement. But the national media seems more intrigued with the A’s than local fans, who continue to stay away from home games in droves.

This could result in a playoff game with thousands of empty seats. I went to such a game in Oakland in the 1974 playoff series against Baltimore; even though the A’s were coming off back to back World Series titles (and would win a third), fans did not like Charlie Finley and stayed home.

Will the A’s trade away their young talent in order to prove the team cannot compete in Oakland (echoing the popular film, Major League)? Maybe not this time. Baseball owners appear to have rebuffed Wolfe’s claim for San Jose territorial rights, and are prepared to wait until he and Fisher sell the team to owners committed to Oakland.

Could we have a similar headline in San Francisco? The Giants may win the World Series, the A’s could win a playoff series, and the 49ers should be favored to win the next Super Bowl.

But the notion of the Warriors winning the next NBA title does not even have enough credibility for an April Fool’s joke. So no parallel headline is possible.