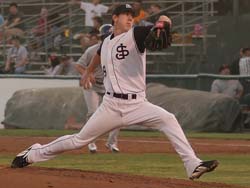 I awoke from my season-long slumber to the following headline this weekend on the Giants website: “Veterans help send Giants off winners.” Winners? Maybe I missed something this season after all.

No such luck. The Giants ended their season 12 games out and in fourth place in the NL West. That is not the bad news. That was expected. The bad news is they developed virtually no new talent in this rebuilding year.

There were only two meaningful developments for the Giants this year. First, obviously, is the dominance of Tim Lincecum. The kid is an ace. Second, Brian Wilson was a pleasant surprise. The Giants finally have a solid closer, and this curmudgeon did not see that coming.

But by all objective criteria, this year’s rebuilding effort was a failure. Not a single young position player has established himself as a stud.

It’s not that the young players are bad. Fred Lewis is solid. Schierholtz, Burriss, Bowker and Ishikawa have some potential. But remember, the Giants talked up all these youngsters at the beginning of this season, and none turned out to be much better than average.

Pablo Sandoval is the only young Giant to shine on offense in any meaningful way. But with less than 150 at bats this season, the jury is still out on this rookie. Statements that “Sandoval has been likened to Vladimir Guerrero, Ichiro Suzuki and even Tony Gwynn” [Chris Haft (mlb.com)] are hard to take seriously.

The power vacuum is worse than ever. Bengie Molina hit clean up all year. Need I say more? The Giants continue to have absolutely no power hitters, and there appear to be none on the horizon. Only two giants hit over 10 homers this year — Bengie Molina (16) and Aaron Rowand (13). No Giant hit over 20. No young Giant hit more than 10 home runs.

Although I’m miffed that Rich Aurelia had over 400 at-bats this season — at-bats that should have gone to young players — Bochy did give the youngsters plenty of playing time this year. Unfortunately, the young position players simply lack the raw talent to become impact players.

As for pitching, Correia showed his true colors and is done. Look for him to be traded to whoever will take him. Zito bounced back nicely from his 0-8 start, but he still doesn’t have what it takes to be anything better than a number 4 pitcher. Sanchez showed in the first half that he has considerable upside, but his second half showed that needs another season to mature. I’m optimistic that he’ll develop into an important asset in the rotation.

There is one thing that the Giants must do this off-season: trade Matt Cain for a young, but proven, power hitter. When Gammons reported that the Brewers might trade Fielder and Hardy for Cain, I could barely believe my ears. I would trade Cain for Fielder straight up, without a second thought.

The fact is Giants can develop pitching, but not hitting. Trading Cain is the only way the Giants will ever start to build a competitive offense.