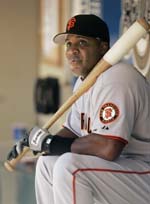 Realizing the need for power in the lineup, Brian Sabean has reportedly offered aging superstar Barry Bonds $16 million to play one more season, and Ray Durham has pledged to serve any sentence Barry receives while a Giant. That’s right folks — Barry’s back. Speaking of Barry, Zito has announced that he’s giving half his salary back to the Giants. He is also supporting a league-wide “lemon law” that would allow owners to reneg on deals within the first three years if high-priced players don’t live up to expectations. And Richie Aurelia has announced that he double-checked his birth certificate, only to find that he is actually 25 years old and poised for a breakout year. The Giants will be unstoppable in 2008!

Or not. April Fools.

When Randy Shaw kindly invited the Giants Curmudgeon back to Beyond Chron for 2008, he commented, “the Curmudgeon has a lot to be Curmudgeony about this year.” Amen to that. This will be the Giants worst season in a long time.

Here’s the projected lineup. As you read this lineup, ask yourself this: would any of these players (other than Aaron Rowand) hit in a position better than 7th or 8th on any team with a real offense?

The Giants’ pre-season talking points conveniently claim that “small ball” will be the offensive philosophy of the team. Not a single returning Giant reached 20 home runs last season. Only Rowand will reach that number this year. It’s going to be very slow in McCovey Cove for kayakers waiting for splash hits this year.

Please do not try to tell the Curmudgeon that pitching will carry us through. Our hitting is so bad that even a pitching staff of Johan Santana, Jake Peavy, Tim Lincecum and Matt Cain couldn’t make this a winning team. Add to that a nonexistent bullpen, and the outlook is beyond grim.

With a team this bad, it is important that management not make the mistake of fielding the veterans just to try to fill the seats. Fans will come to see exciting young players, not a bunch of mediocre veterans losing game after game. And if fans don’t come, so be it. That’s part of what happens when a team rebuilds.

I’ve said it before, and I’ll say it again: play the youngsters. Play Rajai Davis over Dave Roberts. Play Dan Ortmeir (or anyone) over Rich Aurelia. Play Eugeneo Velez over Ray Durham. Play Brian Bocock over Omar Vizquel, even when Omar is healthy.

The news is not all bad for the Giants. Here’s the good news:

First, Giants fans should count our lucky stars that despite the desperate need for power in the lineup, the Giants resisted the temptation to sign Pedro Feliz. Not signing Feliz was the best move of the off-season. At least now faithful fans don’t have to experience the pain of watching Pedro striking out on breaking balls two feet out of the strike zone.

Second, Cain and Lincecum will live up to expectations. They will be fun to watch. They’ll lose some heartbreakers because the Giants won’t score runs, but they will pitch some amazing games.

Third, the Giants just made an announcement that shows that management might finally be getting the Curmudgeon’s message about playing the youngsters. The team is cutting veterans Eliezer Alfonzo and Steve Kline, and filling the spots with young relievers, making way for Merkin Valdez in the bullpen. That, my friends, is good news.

At least we won’t have a repeat of last year in which management deluded itself for the first half of last season, stubbornly clinging to playoff hopes rather than trading for youngsters. With a more realistic outlook, management can focus on building this team for the future.

Sometimes things have to get really bad before they get good again. Buckle up Giants fans, we’re in the bad period.

Let’s play ball, even if it’s going to be really, really small ball.