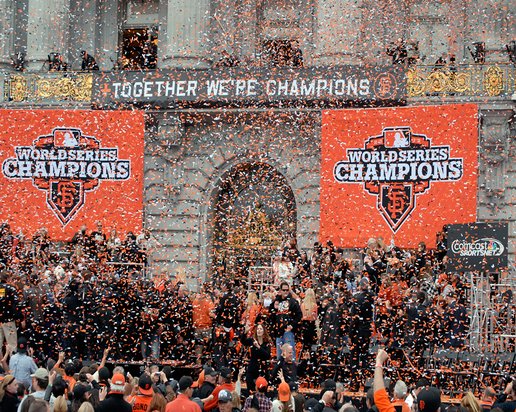 There will be no Giants victory parade this year

Madison Bumgarner pitched a brilliant game last night. But for the first even numbered year since 2008, there will not be a SF Giants victory parade down Market Street this fall.

And unless things turn around in a hurry, it will be some time before a World Series banner is again hoisted at AT&T Park.

I blame the scouting department for the team’s troubles.

Yes, the Giants have had injuries to key players. But blaming injuries ignores how the Giants farm system has failed to produce the quality young players critical to any team’s success.

Dick Tidrow oversees the Giant’s minor league system and is the key decision maker for the baseball draft. He was once considered a genius for building the Giant’s talent pool. According to the Giants website, Tidrow’s “judgment for talent, whether acquired or developed through the farm system, can be seen throughout the roster of the Major League club, as he had a major hand in the teams drafting and development of the 2012 Championship rotation of Tim Lincecum, Matt Cain, Ryan Vogelsong and Madison Bumgarner, as well as closer Sergio Romo.”

But that was then.

Today, the Giants farm system cupboard is bare. And if Tidrow still has the magic, it’s not evident from the current dearth of minor league talent.

No pitcher in the Giants farm system can be counted on to start for the major league team next year. Zack Wheeler would have been in the starting rotation had Brian Sabean not traded him for Carlos Beltran in 2011. Wheeler is now a rising star with the Mets.

Brandon Belt had the makings of a young star, but cannot avoid injuries. Brandon Crawford is a great defensive talent but will never hit well enough for stardom. Joe Panic could end Tidrow’s drought in bringing up front line starters, but the jury is still out.

Meanwhile, the Giants two top outfielders, Pence and Pagan, came from outside the system. Not since Jack Clark, who came up to the Giants in 1975, has the franchise produce a great home grown outfielder.

As for Tidrow’s great successes, Cain has never pitched as well since he threw too many pitches in his perfect game. Giant fans can only hope that he returns to form after surgery. Lincecum’s future is not bright, and Vogelsong’s best years are behind him.

Pablo Sandoval has gone from a larger than life player whose power could carry the team to a high hitter for average who does not change games. Odds are against his returning to the Giants next year.

This leaves Posey and Bumgarner as the anchors of a future great Giants team. Posey could well move the third to extend his career, and he already hits much better when playing first rather than catcher.

Many fear the Giants are heading in the direction of the Phillies. Win a World Series, sign stars to expensive longterm deals, and watch the team decline as these stars falter.

The only way the Giants can avoid the Phillies fate is to do a better job drafting young players.

Has Tidrow Lost It?

There are three explanations for the Giants farm system failure.

First, Tidrow may have lost his ability to evaluate talent.

Second, the Giants success has them picking lower in the draft and they are no longer getting players like Posey who was a can’t miss prospect.

Third, drafts are a crapshoot and the Giants luck in getting Lincecum and others is now balanced with the failure of recent picks (i.e. Gary Brown, the 1st round pick in 2010) to perform.

I’ve heard Sabean and assistant GM Bobby Evans rave about the Giants young pitchers in the farm system. But if they really were that good, wouldn’t there be a spot for them on the major league roster this year?

As the Giants slouch toward the second straight disappointing year, the lights are on in Oakland. A’s fans have gone from wearing team caps to actually attending games, and the good old days for A’s backers may be back.

Is it possible that the focus of Bay Area baseball fans from late September on will be on the A’s rather than Giants? I can’t imagine KNBR-680 allowing such a shift. But if the Giants don’t figure out how to replenish their supply of young stars, the A’s will at least keep East Bay fans focusing on Oakland’s team rather than paying sky high prices to watch mediocrity across the Bay.

Randy Shaw is Editor of Beyond Chron. He is a lifelong Giants fan despite growing up in Los Angeles in the Koufax-Drysdale era.