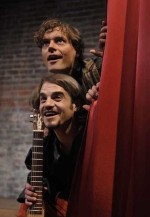 Queens, Kings and all those things unfold like a mystery. Secrets are everywhere from the moment the play opens with a big giant that caresses a young man’s body. It’s like the “Wizard” in the Wizard of Oz. We only see hands behind a moon faced lit face with those comforting arms.

What is the wisdom that this astonishing creature is passing out? Ah, but you can’t have everything just yet. There is more to this play within a play than even a Wizard can tell you all at once.

But, you will enjoy this meticulous and driving account about a Queen and King. Like a big windup clock that stops and starts you go down remarkable gripping and searing pathways. Who can a Queen trust? This is a question that you will try to figure out. But in this splendid specimen of the genre you will be led eagerly along this sly satire of celebrity, consumerism and High class and Lower class.

O.K before you get all wrapped up in tinsel – I will try to tell you the story. It’s about an acting troupe that travels from town to town to entertain. There is an evil Queen who wants the powers of the towns major Wizard. He agrees to teach her how to do a few tricks – but he forgot to mention that he has a sneaky way of giving her a reverse trick.

Later a King is looking for a consort. He gets one, but she is not exactly what he thought she was, even though her appearance strikes the King as a Godsend. They start negotiating details.

There are several stories/playlets told by a roaming troupe of actors. Ten Actors become many different characters that range from good guys to bad guys, magic and even a talking fish. It’s a pretty long play, especially the last act where they talk about making changes to the play. Maybe a little editing would help move it along. But that is a minor complaint. The cast of ten is astonishing. They are superbly absurd and watching them is a special pleasure. They are a blast of energy.

This World Premiere is based on the stories of Author – Peter S. Beagle.

Hey, how about putting their paw prints on the sidewalk outside the Exit? They deserve it!

THE OUTRAGEOUS AND FUNNY DIRECTOR IS STUART BOUSEL.

Heidi Schreck and Carson Elrod in “In the Wake.” Photo: Kevin Berne

O.K., here we go. There is a nice couple that seems to be in love with each other. They have some Lesbian friends that live in the same building. And they all get together for dinners and to celebrate holidays like Thanksgiving. Alarm: They always end up with some kind of dust up. Sometimes it’s about politics or other passions about one thing or another.

Ellen, the Journalist meets a Lesbian girl who is friends of the Lesbian married couple that lives downstairs. Danny (Carson Elrod) is a really likeable guy that Ellen has been living with. Believe me, he puts up with a lot. Danny has personality. Ellen is just neurotic. He knows that she is sleeping with a woman in New York and Boston.

Finally, Danny has had enough. He is through with this. He asks Ellen to choose. Him or her Girlfriend. Ellen Chooses Danny, but has frequent nervous breakdowns. Basically, she doesn’t know what she wants. Danny walks out of her life, and Ellen continues to rant and rave about everything. If talk were money, she’d be a billionaire.

This World Premiere has a few interesting interludes, mostly in the second act. If the first Act were any slower, it would have gone backward. Part of the problem is that it is repetitive. There is no reason that some of this couldn’t have been cut out of the play. Then it would have been amore urgent and concise story. There is just too much chitchat that goes nowhere, and means nothing.

I liked the visual touches with the projected famous Newscasters giving their pompous reports on War, the Bush Administration and other yo-yos.

The set worked nicely for the show. But, I think I was more entertained by the dishes that they were forever dragging out for their friends. If only dishes could talk.

As a social critique, this play fails. The nation is still falling apart, the Oceans are full of toxic chemicals and oil and the current regime has done nothing to stop that. Bush, Obama – is there a difference? I’m not sure just what the play was trying to show us. Should everyone become bi-sexual? Is the guy who is living with the Lesbian, gay himself? I got the feeling that he was, and just hadn’t come out yet.

No matter how you look at this play, over or under the mattress, it is thoroughly mostly boring. There are just too many dull moments. I will point out however that the acting was captivating. You couldn’t ask for a better bunch of actors.

ESPECIALLY EXCELLENT IS CARSON ELROD AS DANNY, AND DEIRDRE O’CONNELL AS THE QUIRKY JUDY.

AT THE BERKELEY REP. THEATRE

MARGA GOMEZ: A BLAST OF ENERGY

WELL, I CAN TELL YOU THERE IS NEVER A DULL MOMENT AT A MARGA GOMEZ SHOW. True to her reputation, and she has a big one, Gomez gives us more action than the Iron Man.

Funny is really not a big enough word to describe her beyond belief stories. But, the thing is they are all based on her life experiences. She’s slyly hilarious and sneakily profound. I think you will love every moment of this show.

Gomez is a great comic storyteller. You realize that in the first 10 minutes. She’s a rare find and a popular one, I might add. Fans of every Gender and Generation will identify with Marga’s show. You may even see yourself in some of the characterizations.

But a warning – some of her material cuts to the bone. She’s not a fluff and bluff. With one look, she could knock out of your chair – with laughter of course.

THIS SPECIAL SHOW IS NOW PLAYING AT THE NEW CONSERVATORY THEATRE.

SEE IT! YOU’LL BE TELLING ALL YOUR FRIENDS ABOUT IT.

VERY WARM FOR MAY- MUSICAL GOLD

ALL THE THINGS YOU ARE is the big hit song in the musical “Very Warm for May.” Introduced in 1939 on Broadway, it didn’t last very long. Alas, it was a Broadway flop.

Flash forward to 2010. It took that long, but now with the cast of 42nd Street Moon Theatre it is now a wonderful, fun and hilarious show.

In the current version at the Eureka Theatre, they have restored much of the show that was cut along the way. Here are some of the great songs: “All The Things You Are,” sung with a great arrangement from the original. Other musical highlights are “All in Fun,” “In the Heart of the Dark, “Heaven in My Arms,” and “That Lucky Fellow.”

The story is a little complex. But 42nd Street Moon has a blast with the Barnyard show. The director of the show in the play is bent on being esoteric. He has visions of taking a simple show and making it into something that makes no sense and never ends.

It’s superbly paced, cleverly plotted and totally absurd. The musical intentionally puzzles but pleases to no end. And then there is the camp, inching close to being somewhat gay.

Of course, there is a missing person. A well-known producer is trying to find her. Everywhere you look — there is love in the air, and in the end they sing their hearts out.

He’s back! That would be Bill Fahrner, a seventeen-year veteran of many Moon shows, plays with abandon a very erratic, over the top director (Ogdon Quiller). In the Broadway show Eve Arden was Winnie Spofford,the patroness of the Ogdon Quiller Progressive Playshop. This role is played and sung by the incredibly accomplished Maureen McVerry.

Peter Budinger is excellent as the ex-boxer who is also a theater critic. Anil Margsahayam, who has been with the Oregon Shakespeare Festival in Ashland for two years, is back. In this play, he is a successful Broadway director (Johnny Graham) who is looking for his missing Sister May(Megan Hopp). She is great at hiding out. Vaudevillian Will Graham (JeremyVick) is absolutely fabulous.

This is a sly, adroit and joyous musical. “A Must See!”