Get Rid of Beauty Contests 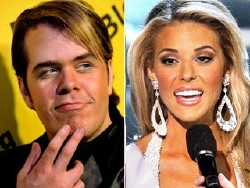 The media and the internet are still obsessing about whether Miss California’s anti-gay marriage remark during the pageant last weekend cost her the title of Miss USA. I’m wondering why in the world contests such as Miss USA still exist.

Southern California’s Carrie Prejean, who was narrowly defeated in her bid for the crown by Miss North Carolina, responded to a question on gay marriage by saying, “I believe that marriage should be between a man and a woman. No offense to anybody there. But that’s how I was raised and that’s how I think it should be.”

The question was posed by out queer judge and blogger Perez Hilton, who was upset by the contestant’s answer. Prejean defended her remarks on NBC’s Today Show by saying that “it’s not about being politically correct. For me it was being biblically correct.”

Does the god of the Old Testament endorse an anorexic looking woman in the face paint of a whore getting up on stage and strutting her stuff for all the world to see? To win a title that will take her on a whirlwind schedule of speaking engagements in which she will be admired for her beauty, not her skill at cooking, cleaning house and bearing lots of bambini.

Miss America contests have been controversial before. I remember in 1968, when Radical Women protested the competition in Atlantic City, New Jersey. They marched outside the huge auditorium on the boardwalk, crowning a sheep as their beauty queen and tossing curlers, tweezers, bras and other objects into a trash can. Sixteen feminists actually bought tickets and unfurled a banner inside that read “Women’s Liberation.” Two stink bombs were set off in the auditorium.

They were protesting the sexual objectification of women, and the fact that at the time, the female of the species could not be much more than beauty queen or housewife.

In some ways, women have come a long way, baby. They may not be able to be president yet, but they can be Speaker of the House and Secretary of State. In the business world, they have proven themselves capable of competing all too well with their male counterparts. They’ve made gains in almost every area. Except one.

Women still have to be thin and beautiful. Would America accept a fat Nancy Pelosi or a Hillary Clinton with constant bad hair or acne? In the business world, dressing for success still means being sexually appealing to male execs and customers.

Men on TV and in movies can be lax about their looks or their weight, but women can’t. The King of Queens can skip the gym, but not his wife. Ditto for some of the other male leads who look more like Sumo wrestlers than Enrique Iglesias.

It’s admirable that Perez Hilton didn’t ask the usual inspid question. But when all is said and done, these competitions need to go the way of fossil fuel.