German Gems — “Under Control,” “Above Us Only Sky,” and “Taboo — The Soul is a Stranger on Earth” 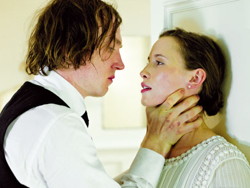 Ambivalence is an unofficial theme of several selections at this weekend’s German Gems mini-festival, as well as the mini-festival itself. This year’s celebration of New German Cinema marks curator Ingrid Eggers’ final presentation of the best of German and Austrian film to Bay Area audiences. If this program at the Castro Theater is Eggers’ last Kinotag before a new generation of programmers make their mark or not, the selections discussed here cannot be accused of fostering viewer complacency.

Leading off the film program is Volker Sattel’s documentary “Under Control.” Peaceful uses of nuclear energy were intended as a symbol of the future. Thanks to incidents at Three Mile Island and now Fukushima, nuclear power has become an energy pariah.

Sattel’s film tours nuclear power plants and their supporting institutions in Germany, Austria, and Bavaria. Stops on the tour include visits to working and decommissioned nuclear power plants, a pro-nuclear power convention, and atomic waste storage facilities. In addition, there are interviews with people ranging from nuclear scientists to risk assessment specialists.

Despite requiring management permission to film inside various nuclear power plants, Sattel does not pre-censor the film to create a pro-nuclear slant. “Under Control” is a nonjudgmental elegy, a cinematic album depicting both human ingenuity and human hubris. When the film presents overhead footage of the daily workings of a nuclear power plant, it reminds the viewer of the complexities of harnessing the atom’s power without minimizing the sense of the numerous possibilities for problems.

Containment facilities taller than 110 feet were probably inconceivable to the scientists who used 1940s technology to split the atom. But in the process of finding new and better ways of exploiting atomic energy, who or what should bear the costs of development? When should one decide whether a technology should be abandoned or pursued in hopes of finding a less environmentally destructive way to use atomic energy?

“Under Control” portrays people taking best efforts to safely and peacefully use atomic energy. What it doesn’t consider is the PG&E scenario of willingly compromising public safety to maximize shareholders’ personal profit.

Images of the Kalkar breeder reactor will inspire either viewer joy or mourning. This power plant never went online, and was eventually turned into an amusement park. Is situating a swing carousel in a former cooling tower an example of ingenious recycling or a testament to popular unwillingness to take chances for a better future?

Jan Schomburg’s intermittently successful debut feature “Above Us Only Sky” metaphorically deals with unexpected loss. Martha and Paul Sabel’s ideal marriage instantly crumbles during a long awaited move to Marseilles. The high school teacher finds out too late that their supposedly ideal relationship is built on a structure of her husband’s lies. In an effort to rebuild her shattered life, she eventually begins a relationship with philosophy professor Alexander. Yet will this new relationship heal Martha or unconsciously confine her with old emotional pains?

Schomburg’s film works best when it uses small mundane moments to convey larger emotional truths. The opening shot of Martha listening closely makes one wonder whether she blames herself for missing the small cues that would have revealed her husband’s deceptions. The setup of the scene where Martha’s life changes for the worst begins with an innocuous offscreen moment.

Yet the film is hampered by a bad sense of pacing. The early part of the film feels too mired in details of Martha and Paul’s life. Alexander is introduced in what unintentionally feels like a gratuitous diversion.

The resolution of the film feels abruptly arrived at without a chance to see the emotional reconciliation Martha makes with her loss. That said, Schomburg shows intelligent promise in such touches as the film’s memorably metaphorical title.

Christoph Stark’s loosely historical early 20th century drama “Taboo—The Soul Is A Stranger On Earth” closes out German Gems with a story sure to generate much viewer discussion.

The film traces the tumultuous relationship between famed Expressionist poet Georg Trakl and his talented pianist sister Margarete. The siblings comforted each other through a lonely childhood.

Now the grown budding pianist has become the aspiring poet’s muse, as well as his lover. Yet while Margarete longs to push their relationship beyond sex, Georg is torn between a tormented desire for his sister and jealousy over other men’s attentions.

Ursula Mader’s screenplay aims for conveying emotional truth rather than historical truth. No evidence exists that the Trakl siblings had a physically incestuous relationship. Yet Georg’s wild and passionate poetry does frequently reference Margarete as “the sister.”

One particular poem quoted in the film mentions both religious obeisance and a taboo passion. Lars Eidinger (Chris from Maren Ade’s “Everyone Else”) makes Georg walking emotional nitroglycerine. One sees in equal measure the unsatisfied longing for his sister, his self-destructive drug addiction, and his poetic genius.

Peri Baumeister makes honest and commonsensical Margarete’s incestuous passion. She embodies the clash between an honest love that defies societal disapproval and frustration with Georg’s unwillingness to share her boldness.

Stark’s film pits viewers’ cinematically conditioned desire to see the union of two people obviously right for each other against the viewers’ own personal limits on “acceptable” romantic relationships. Margarete’s marriage to an older man may be more socially acceptable, but it’s clearly a loveless relationship.Yet to approve of Georg and Margarete’s union is to accept a relationship that violates societal taboos against incest.

“Taboo” brings to the amour fou story an unsettling mix of jealousy at its protagonists’ emotional intensity and fear of one’s own inadequate romantic commitment.