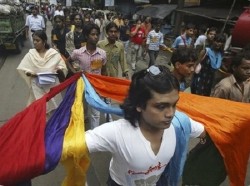 In a ruling that left court observers in tears, the Delhi High Court overturned India’s sodomy law that made gay sex between consenting adults illegal. Conviction under Section 377 of the Indian Penal Code, which was originally introduced by British colonial rulers in 1860, meant a fine and a possible 10 years in jail.

In its amazing ruling, the court said that “the criminalisation of homosexuality condemns in perpetuity a sizable section of society and forces them to live their lives in the shadow of harassment, humiliation, cruel and degrading treatment at the hands of the law enforcement machinery.”

“Indian Constitutional law does not permit the statutory criminal law to be held captive by the popular misconceptions of who the LBGTs are,” the court continued. “It cannot be forgotten that discrimination is antithesis of equality and that it is the recognition of equality which will foster the dignity of every individual.”

The decision could now be appealed to the Supreme Court by the state, though that doesn’t seem likely. Another possibility is an appeal from homophobic parties to the suit.

Indian media immediately hailed the decision, saying that it was a big step forward for civil liberties and the fight against AIDS. The Times of India called the decision a “Victory for Choice” in the headline of its pro-gay sex editorial. “In 21st century India it is perverse to penalise adults for their sexual choices,” the paper said.

The Indian Express also applauded the ruling, adding, “Liberty is an incremental accomplishment and a grand step has just been taken.” It asked, “Can a modern democracy intrude upon the private domain of consenting adults on the grounds of ‘moral indignation?’”

The Hindustan Times noted that prior to 1860 and domination by the British, the continent had “a non-intrusive and blase” attitude toward same-sex relations.

Britain abolished its laws against consensual gay sex in the late 1960s.

“This is just the beginning,” said Anjali Gopalan, director of the Naz Foundation, which brought the matter before the court. “The battle will continue till every member of this community gets all the rights that an ordinary citizen has.”

“Till now we were considered to be criminals,” activist Vikram Doctor told the BBC News. “If a gay couple wanted to buy a house together, it was not possible. No financial institute would even consider them.”

Activist Nitin Karani said, “This ruling will contribute in making society’s attitude more positive. Cases of police harassment may reduce. I have seen people driven to suicide. I hope this decision gives more confidence to gay people to come out, be less afraid.”

Of course, religious leaders from the nation’s Muslim and Christian communities were not happy with the decision. They said that the ruling would make no difference to them, they would simply continue with their homophobic business-as-usual.