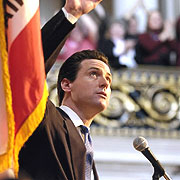 Anyone trying to discover why Mayor Gavin Newsom is politically unbeatable in November need only examine the events of recent weeks. There was a Muni meltdown over the failed start of the “T” line, the City Attorney reported that the woman the Mayor had an affair with was allowed to sign her own timesheets (while others were approved by her husband), the city’s public housing crisis remains unaddressed, and gun violence broke out in multiple neighborhoods. But none of these issues “stuck” to San Francisco’s Teflon mayor. Why? Favorable media coverage is one answer, but there are more persuasive reasons why the city’s problems do not “stick” to the Mayor.

Mayor Gavin Newsom is about to complete a full term without suffering any major political damage. This is not because serious problems have not emerged since January 2004, but rather it is a result of three factors that add to the mainstream media’s pro-Newsom bias.

1. The Impact of National Politics

In my view, the single biggest reason for Mayor Newsom’s consistently high poll numbers, and the inability of even major scandals to greatly reduce these numbers, is that San Franciscans are primarily focused on the evils of the Bush Administration and the war in Iraq.

Simply put, it is hard to get outraged over the lack of mayoral control over Ruby Rippey-Tourk’s timesheets when the United States Government is perpetuating a “killing fields” in Iraq.

San Francisco has long been a city whose residents care deeply about national and international politics. Many residents are not from the city and/or do not plan on living here long-term, so following local politics is not a top priority.

When San Franciscans check the news in the morning, they are concerned about the latest Bush Administration misadventure, and are eager to know what Nancy Pelosi and Congressional Democrats are doing about it. After reading about the horrors in Iraq, the Supreme Court’s right-turn on abortion rights, the latest twist in the US Attorney firings, the illegal entries into immigrants’ homes by INS agents, and the endless list of other Bush Administration outrages, the shortcomings of San Francisco Mayor Gavin Newsom seem unimportant, even trivial.

San Franciscans did not like President George H. W. Bush when Art Agnos was the city’s mayor, but people did not awaken each day angry at Bush and in despair at how he was destroying America. In those days, or during the Clinton years, residents had far more space to focus on local issues than since Newsom took office (which coincided with the Democratic presidential primaries and the campaign to oust Bush in November 2004).

During San Francisco’s 2003 Mayor’s race, the race for the Democratic presidential nomination for the 2004 election was off the radar screen. Today, San Francisco Democrats are pouring money into the campaigns of Clinton, Obama, and Edwards. Donors and many activists are more focused on the 2008 presidential race than they are on local issues.

With San Francisco activists focused nationally, it is understandable why there is little preoccupation with criticizing the city’s incumbent mayor.

Mayors Feinstein, Agnos, Jordan and Brown all took political hits over homelessness. Newsom has not. The Mayor’s sponsorship of Care not Cash is only part of the reason, as there are enough homeless people on city streets to cause trouble for an incumbent mayor facing re-election.

I attribute the Teflon surrounding Newsom on homelessness to Project Homeless Connect (PHC).

When PHC began, critics understandably questioned its ability to reduce homelessness. Photos of Newsom washing people’s feet smacked of a public relations strategy to make the mayor appear Gandhi-like in his devotion to the poor.

But the point critics missed is that PHC may be the single most important innovation of the Newsom Administration, and perhaps the most progressive.

For years, San Francisco mayors directed city staff and nonprofit service providers in the battle against homelessness. Since the Mayor was solely responsible for the program (even the Supes had little role in implementing homeless policy), they became the chief target of public unhappiness with homeless persons.

In contrast, PHC expanded the opportunities–and implicitly the responsibilities–for San Franciscans to work to reduce homelessness. PHC gives volunteers the sense of being on the front lines of the city’s effort to address its homeless problem, and a broad array of residents now feel more vested in obtaining a solution.

This sense that fighting homelessness in not simply the mayor’s responsibility but that of all San Franciscans helps explain the lack of public anger at Newsom for ongoing sleeping on city streets. This collective approach to problem-solving is rare for governments at any level, and, despite its success, it is not typical of the Newsom Administration’s approach to other problems.

Newsom’s outstanding record of housing homeless people has helped him on the issue, but Agnos completely redirected city homeless policy toward permanent solutions and the public did not reward him when he ran for re-election. By getting large numbers of residents involved in reducing homelessness, PHC has helped ensure that criticisms of Newsom around homelessness do not stick.

3. Newsom is Perceived as “Hands-On”

What struck me about the T line Muni meltdown was how little the Mayor was blamed, and how he was instead praised for walking through stations appearing to try to figure out what was wrong. People like to see a Mayor down in the trenches trying to solve problems, even when their efforts—as with the T-line—produce no solution.

Political insiders and the public view Newsom’s approach to governing differently. Insiders see Newsom as disconnected from much of the city’s daily operations, and far less “hands on” than his predecessor, Willie Brown.

But the public views it quite the opposite. While Brown had his finger on the pulse of every city department and on important agency decisions. He was seen as regal, above the fray, and certainly not “hands on.”

In contrast, the fact that Newsom is regularly seen walking alone through the Tenderloin, in Muni stations, and in other areas where mayors are not customarily present has solidified his public image as a “hands on” mayor. Since Newsom is seen as someone actively trying to make things better, he gets less blame when Muni stops running, public housing falls into disrepair, or even when his own office fails to follow city procedures for accounting for employees’ time.

Could media coverage that harshly criticized Newsom on such issues erode his Teflon? Partially. But amidst the outrages of the Bush Administration and the 2008 presidential race, missing time sheets, Newsom’s refusal to attend “question time,” or a week of transit problems are not likely to dent his popularity.