Gascón: Heed Your Own Words! 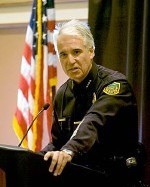 San Francisco Police Chief George Gascón needs to heed his own words. In an op-ed in The Crime Report, the head of our Police Department (who once served as chief of the Mesa, Arizona police force) writes about Arizona’s new racist, anti-immigrant law (which allows cops in that state to stop people they suspect of being undocumented.) But his words could just as easily be applied to San Francisco’s proposed Sit/Lie Ordinance, which Gascón supports.

Sit/Lie, which was just rejected 8-3 by the Board of Supervisors and is now no doubt heading for the ballot in November, would make it illegal to sit or lie on sidewalks in San Francisco during certain hours. Police, according to Gascón’s own statements, would have discretion to enforce this law in whatever way they see fit.

In other words, instead of hassling European tourists who are sitting down somewhere, they can go after queer homeless kids in the Castro or day laborers in the Mission. “Discretion” has always meant “selective,” especially with Sit/Lie.

In the 1970s, a similar Sit/Lie law targeted gay men in the Castro, prompting gay rights leader Harvey Milk to oppose it. It was struck down in 1979 as unconstitutional.

In his article, Gascón expresses three concerns about the Arizona law. First of all, he says, it will “adversely affect public safety” by inclining immigrant communities “to distrust the police.” Sit/Lie will do the same thing by inclining the immigrant, the homeless queer, and the homeless/poor communities in San Francisco to distrust police they are already wary of because of a history of officers harassing these individuals.

In addition, Gascón believes that the new anti-immigrant law “creates a resource allocation problem. Police departments in Arizona, already spread thinly and under-funded, now have an added responsibility – to enforce federal immigration law.” Or, in our city, to enforce Sit/Lie.

In a similar fashion, Sit/Lie will also lead to “constitutional violations.” As has been demonstrated in the past with the targeting of gay men in the Castro. Not to mention Gascón’s own admission that not all residents will have to fear the law equally.

What Gascón doesn’t mention is the cost of these types of laws. In these economically tight times, when social services are being eliminated by budget cuts, our city cannot afford the costly legal battle that will surely ensue from sit/lie.

“I frankly can see nothing of value resulting from this legislation,” Gascón concludes. “At a time when law enforcement officials are attempting to engage all stakeholders through community policing practices, and to bring about the level of safety that all communities deserve, this is a significant step backwards.”