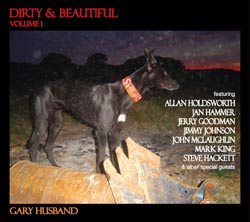 Over the course of a remarkable, still-unfolding career, Gary Husband has defined himself as the ultimate musician’s musician: a fiery, perceptive presence who elevates every scenario – from the tightly arranged to pure, open-ended improvisation. Whether focusing on his intricate, propulsive drumming or unleashing his nimble, harmonically astute keyboard abilities, Husband never fails to make his presence felt, while always remaining sympathetic to his fellow musicians and to the composition at hand. His vast range of experience allows him to balance the technical and the intuitive with rare grace, earning him the opportunity to perform and record alongside such maverick, inventive talents as John McLaughlin, Jeff Beck, Allan Holdsworth, Jack Bruce, Mike Stern, Robin Trower, Billy Cobham, Gary Moore, Level 42, Andy Summers, and many, many more.

In addition to his prolific career as a sideman, the British-born Husband has recorded seven of his own albums, featuring his multi-instrumental, compositional, and bandleading skills in an array of contexts. He is now poised to release his most ambitious project yet, the two-volume Dirty & Beautiful, volume one of which is to be made available by Abstract Logix on November 16, 2010, with volume two to follow in Spring of 2011. A visionary exercise years in the making, recorded in studios around the world, Dirty & Beautiful Volume One is a riveting showcase for the many gleaming facets of Husband’s musical imagination, featuring an enviable cast of supporting musicians, among them John McLaughlin, Allan Holdsworth, Robin Trower, Steve Hackett (Genesis), Jerry Goodman (Mahavishnu Orchestra), Jimmy Herring (Widespread Panic, the Dead, Allman Brothers Band), Jan Hammer (Mahavishnu Orchestra and Miami Vice TV series soundtrack), Mark King (Level 42), and more.

“I feel this album to be rich, full of extremes, and passionate,” Husband reflects. “It’s not at all my first album, but it feels a little like a debut album, in that it heralds a return to my jazz/rock roots.” The album’s title hints at the unique co-existence that defines his music: for all its sophistication, technique, and facility, there is an underlying grit and intensity that somehow only enhances the luminous beauty at the core of these performances. “If I think about what it actually is to play – what the feeling is in what I chase – there’s a quest for a profound beauty there, certainly. But it can’t really be whole, to me, without the grunge, and the dirt. Like picking a fresh raspberry in the woods and eating it.”

From brief, meditative keyboard soundscapes like “Afterglow” and “Swell” to intense, full-bore fusion workouts, Dirty & Beautiful includes newly-written and older Husband compositions alongside material from Holdsworth, guitarist Steve Topping, and formative classics by Jan Hammer and Miles Davis. Throughout, Husband performs all the drums and – save for a guest spot by Hammer on the opening “Leave ‘Em On” – all the album’s keyboards. “The duality between drums and keyboards is like second nature to me,” he explains. “I’ve always been involved with the two instruments to the same degree. It’s never been one over the other, and what I do with both tools makes up my complete realm of expression. If I’m playing drums along with a previously recorded track on keyboards or vice versa there’s an instinctive sort of inner trust I detect, follow and settle with very quickly. I know it probably sounds like a pretty crazy method, but it all seems to figure out in the way that I feel it and approach it in a very natural way.”

Of late, Husband has been most visible as a member (on both keys and occasional drums) of John McLaughlin’s current performing/recording ensemble the 4th Dimension and through his longstanding work with various groups lead by Allan Holdsworth. Both guitarists – each an iconic figure who have had an immense influence on nearly every element of contemporary hybrid musics – contribute to Dirty & Beautiful, marking the first time they have appeared on the same project. McLaughlin’s extraordinary solo on “Dreams in Blue” is exploratory and organic, moving from more expansive quiet statements to raging, brisk passages underpinned by Husband’s furious, skittering drums. Husband follows McLaughlin’s statement with a hushed acoustic piano solo that builds to a dizzying peak, allowing brief spotlights for guitar and bass to lead back into the restatement of the theme. Holdsworth contributes guitar to his own composition “Leave ‘Em On,” a longtime staple of his trio’s live sets that has remained unrecorded until now. A subtle, deceptively gentle performance, Holdsworth is heard at his most evocative and probing, hanging long sustained notes over Husband’s active percussion, Jan Hammer’s glimmering keyboards, and the solid foundation of bassist Jimmy Johnson.

Holdsworth, Johnson, and Husband reconvene as a trio to perform Husband’s haunting, disorienting “Boulevard Baloneyo,” fittingly, as the song is based on their misadventures while on tour. “It depicts one of the journeys we did that I sort of deliberately ‘surrealised,’” says Husband, laughing, “in tune with this constantly overtired disposition and frazzled state of mind we were all experiencing, brought about by jet lag and a rather exhausting tour schedule. Allan and Jimmy were marvellous on it, and I was really delighted with what we got. None of it is altered, edited or features any overdubs of any kind. With the exception of the front synth melody, the opening and closing GPS machine announcements, it’s all just exactly as it happened on the day, live, in the studio.”

Despite its kaleidoscopic range of styles, textures, and grooves – not to mention the various globe-spanning locales in which it was recorded – this first instalment of Dirty & Beautiful is powerfully coherent, thanks to both the consistent quality of its contributors and to Husband’s careful curatorial instinct. “As with any album I make,” he explains, “I concerned myself directly with the overall curve of the record – the journey it presents, how it travels from track to track, and the overall coherency. But, as I strongly hoped for since the beginning, and in spite of the fact there are a lot of artists from very different realms here, there is a definite, very particular kind of coherency going on through the several different lineups just doing what we do together – everything and everyone towards the same cause. The whole thing plays as I’d hoped – as one message, with everyone concerned conveying the same level of commitment, energy and heart from track to track through their performances. After all, the artists involved here are all so great, a lot of factors kind of end up taking care of themselves anyway!”

From Robin Trower’s churning, wailing post-Hendrix guitar on the brief visit to Miles Davis’s “Yesternow”, to Steve Hackett’s stirring interpretation of the wistful “Moon Song” through to Mark King’s slithering bass on the refracted second-line funk of the closing “Alverstone Jam,” Dirty & Beautiful Volume One is an explosive, evocative celebration of the of the mutual respect between Husband and his collaborators, and instantly heightens the anticipation for the second volume. “It’s predominantly a record just about playing the kind of material I feel like playing right now with people, friends, and musical colleagues that I feel like playing with,” Husband concludes. “In a big way, it also documents my perpetual activity as a touring musician. This album is what my diary frequently looks like and it portrays very much the fulfilment I experience playing with all of these various people on a pretty consistent basis, in the many and various musical worlds and situations that I do or have done. It’s got my stamp on it, but we all speak and tune in to basically the same common language. Friendship binds it. Respect and harmony are also elements that bind it. There is the fact that I know most of these gentlemen extremely well and feel a deeply special closeness and bond with them as individuals and musicians. That binds it in an ultimate way for me.”