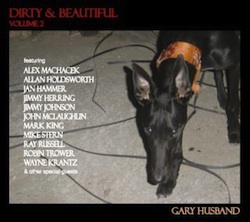 Dirty & Beautiful Volume 2 does not merely pick up where 2010’s Volume 1 left off. Volume 2 expands upon Husband’s musical vision of creating music that is passionate and sophisticated, yet infused with grit and rawness. The mix of Husband originals and cover tunes are driven by the combination of the dynamic powerhouse drumming, ferocious lead lines and distinctly evocative keyboard harmony that altogether define Husband’s “multiple threat” of a musical voice.

Selected highlights of Dirty & Beautiful Volume 2 are “Fred 2011”: A reworking of the classic Allan Holdsworth song with Holdworth on guitar and synth-master Jan Hammer taking an extended fire breathing solo. “Sulley”: a stompin’ rocker with the great John McLaughlin on guitar and bassist Mark King getting down and dirty. “Yesternow Epilogue”: guitarist Robin Trower continues his Strat-soaked blues rave-up that was teasingly hinted at on “Yesternow” preview from Volume 1. Alex Machacek deliciously smouldering on his self-penned “Lock, Stock & two Smoking Brothers”.

Last June, Husband described recording this latest effort on his website, “I had the pleasure of mixing in Austria (with the splendid engineer Marcus Wippersberg at the helm), two of the feature cuts on the album just recently – one being a real tour-de-force piece written by Machacek, and the other being my piece “Sulley” (which is a tune performed regularly by ourselves in John McLaughlin’s 4th Dimension.) On the former – which is still at rough mix stage – I am featured on drums, and I feel it’s turned out very strongly. The version of “Sulley” I am also particularly excited about. I have maestro John McLaughlin and bass giant Mark King going head to head throughout the whole piece. There’s an interesting tonality aspect to it all that I’ve introduced, and I’m very proud of the experiments we made on this cut.

I think it’s all come off marvelously rude, audacious, pretty different and (for me) very stimulating. It reveals a stunning and monstrously spirited performance by Mark that I feel probably only a certain few would associate with him (from his legendary stylings over the years in his famous group Level 42), and I’m really very proud to feature it. John is John, and is on absolutely great form throughout…”

“You’re hearing also a tiny snippet at the end of another piece by me – “England Green” – which, when mixed, will reveal a lovely performance guitarist Jimmy Herring played. He has something very, very special and soulful and I’m particularly delighted to be featuring him on the album. On bass on that track; again the very formidable Laurence Cottle, (heard not long ago in the final incarnation of drummer Bill Bruford’s Earthworks).

There is also a version of Allan Holdsworth’s “Fred” we have in preparation for mix (originally featured on the Tony Williams New Lifetime album “Believe It”, and it’s a tune I have also played regularly with Allan over the recent years.) On bass here, again the sublime Mr. Jimmy Johnson, and on keyboards and synth solo once again on this follow-up album we have the great Jan Hammer. From the original LA sessions I will also feature another take of “Boulevard Baloneyo” which for me is very special, and for this album we’ll probably give it a “re-travelled” tag in the title….”

“A cover of John McLaughlin’s piece “New Blues Old Bruise” featuring a great friend and tenor saxophone virtuoso Sean Freeman (along with bassist Etienne MBappe and myself.) I will also be recording another electric piece – “East River Jam”, (an older piece of mine previously entitled “East End West End”) – which will feature another great old friend of mine; the very electric Ray Russell on guitar….”

“Add to all this more of Robin Trower and Livi Brown, hopefully a track to be recorded with Wayne Krantz and maybe another with Mike Stern, and a cover of another Jan Hammer track called “Rain”. That’s actually a piece that was featured in Jan’s excellent music for Miami Vice, and it’s a touching little thing – very much with a pop sensibility to it. For guitar on this I’m in now in touch with Neil Taylor, who is someone I’ve personally been a huge fan of on guitar since I heard his riveting solo in the ’80s on Tears For Fears song “Everybody Wants To Rule The World”…”

With a roster of top-tier musicians and stellar performances, Gary Husband’s Dirty & Beautiful Volume 2 promises to be one of the most musically exciting and musically rewarding releases of 2012.