Garcia Has Facts Wrong in Attack on Greens 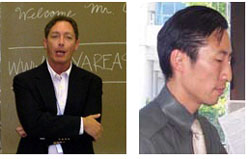 Ken Garcia has become a more entertaining columnist since moving from the Chronicle to the Examiner, but his command of the facts has not improved. In Thursday’s attack on the School Board he blamed “Green Party members” for “running” former Superintendent Ackerman “out of town.” The truth is that the School Board member most identified with trying to hold Ackerman accountable is Eric Mar. Mar is a longtime Democrat who jas served multiple terms on the San Francisco Democratic County Central Committee. Green Party Board members Sanchez and Lipson would be the first to acknowledge Mar’s key role in returning public accountability to the school district, and the Board’s positive action toward Ackerman—scorned by Garcia–represents a bipartisan accomplishment.