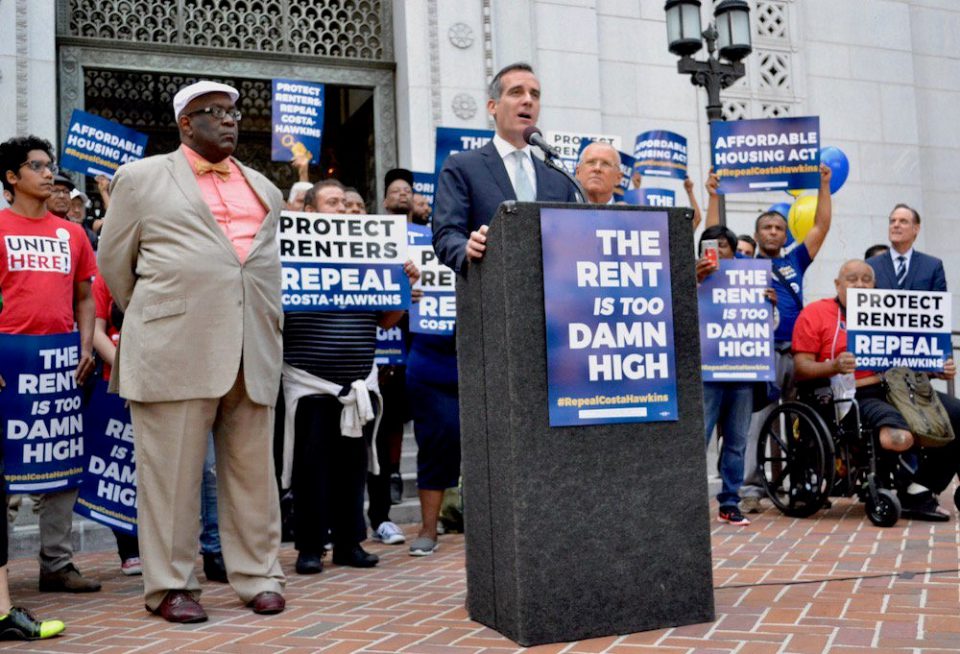 Over 588,000 signatures were submitted to the state, far more than the 402,000 needed to qualify. The submission was accompanied by rallies in Sacramento, Oakland and Los Angeles.

At a City Hall press conference yesterday, Garcetti told the crowd, “You have my full support [for repeal]. I know we can get this done in November.”

Garcetti’s backing is huge for two reasons. First, he is mayor of the largest city in California. Second, and more importantly, Garcetti adds mainstream progressive legitimacy to a ballot measure funded by the AIDS Healthcare Foundation, a group whose anti-development measures have put them on the opposite side of Garcetti and the city’s labor unions in the past.

Garcetti’s announcement also exposed what will be the real estate industry’s main line of attack against the AHA. As Tom Bannon, CEO of the California Apartment Association, stated, “It (the initiative) is a disincentive for the construction or new, multi-family housing.”

Landlords know they cannot ask voters to support raising rents an unlimited amount when units become vacant. Nor can they  justify Costa-Hawkins’ exemption of single family homes from rent control. That too is a losing argument.

Instead the landlords’ multi-million dollar campaign (under the name Californians for Responsible Housing) will be about claiming that the AHA will stop new construction. Landlords know that Californians support building new housing. They figure that if they can convince voters that the AHA will stop such housing, voters will reject the measure despite supporting its giving cities more power to craft effective rent control.

Landlords will argue that repealing Costa-Hawkins allows localities to impose rent control on new construction where such option is now foreclosed. But if cities were inclined to do so, why didn’t they even try to do so when enacting their own rent control laws?

I know the answer from those days: activists felt covering new construction would bring in too much opposition and that it made political sense to just cover existing buildings.

That political judgment has not changed.

Keep in mind that AHA’s victory does not impose either rent control on vacant apartments or on single-family homes. It only gives cities the right to pass such measures.

And given the politics and the tenant movements’ alliance with the building trades on many issues, there is no way that new construction will be brought under rent control. But the fact that this will never happen will not stop landlords from flooding the airwaves claiming that it could happen if Costa-Hawkins is repealed.

Costa-Hawkins passed when Republican Pete Wilson was Governor and Republicans controlled the State Assembly.  California was much more affordable in those days, and Costa-Hawkins is one reason it has become much less so.

Will the landlords’ $25 million “No” campaign fool California voters into rejecting a measure that will make the state more affordable? It’s going to be one heckuva fight.

And support from mainstream progressives like Mayor Garcetti will make a big difference in winning voter support for the initiative.

Randy Shaw is Editor of Beyond Chron. He discusses strategies for winning rent control campaigns in The Activist’s Handbook: Winning Social Change in the 21st Century