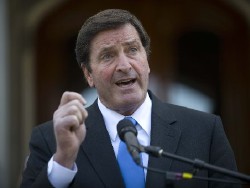 With superior name recognition, Lieutenant Governor John Garamendi is the front-runner in the September election to replace Congresswoman Ellen Tauscher. But a Garamendi victory could spell disaster for a cause he has made a centerpiece of his campaign platform, and has supported throughout his whole career – the environment. As Lieutenant Governor, Garamendi sits on the California State Lands Commission – a three-person body that wields enormous power on environmental issues. Recently, Garamendi led the charge on the Commission to successfully kill Governor Schwarzenegger’s move to allow offshore oil drilling on the Pacific Coast – by a 2-1 vote. If Garamendi gets elected to Congress, he will have to resign from the State Lands Commission – and Arnold will get to pick his successor. Garamendi has the Sierra Club endorsement in this race, due to his campaign platform. But will the environmental community be happy after he wins the seat, and his replacement potentially votes to allow offshore oil drilling?

In an election to become 435th in seniority in the U.S. House of Representatives, some of the leading candidates have been accused of “giving up” their current elected position – and jeopardizing progressive politics. State Senator Mark DeSaulnier and Assembly member Joan Buchanan would both have to give up their seats in the legislature, which will necessitate another special election. Some have argued that because Republicans continuously hold the state budget hostage, progressives cannot afford to lose a single Democratic seat in Sacramento. But Democrats don’t have a two-thirds majority right now with DeSaulnier and Buchanan – so the impact of a vacancy would be at worst minimal. Moreover, at least DeSaulnier is guaranteed to be replaced by a Democrat.

But who would replace John Garamendi? The question has not received much attention – in part because no one really knows what a Lieutenant Governor does. We all know that, like the Vice President, the Lieutenant Governor is next in line after the Governor. But the Lieutenant Governor, by virtue of their elected position, also gets to sit on various bodies – such as the UC Board of Regents, the CSU Board of Trustees, the Ocean Protection Council, the California Emergeny Council and (most importantly) the State Lands Commission.

The State Lands Commission votes on crucial environmental issues, such as authorizing whether to allow offshore oil drilling. And it only has three members: (1) the Lieutenant Governor, (2) the Controller (currently a Democrat, John Chiang) and (3) the Governor’s Finance Director. If the Lieutenant Governor resigns – which Garamendi would do if he wins the election – the Governor would appoint his replacement, subject to confirmation by both houses of the state legislature. On other commissions, allowing Schwarzenegger to fill a vacancy is not a big deal. But here, Arnold would effectively get a 2-1 majority.

In the past few months, Schwarzenegger has attempted to resume offshore oil drilling, as a shameful and dishonest means of “raising revenue” for the state. Forget, for a moment, the environmental consequences of such a move. The revenue raised from “oil drilling leases” to companies would be minimal – because the Governor adamantly refuses to charge companies an oil severance tax, although Texas and Alaska have one.

California has not allowed offshore oil drilling for 41 years, since the Santa Barabara oil spill. But it has become a hot topic in the Congressional race, in part because Garamendi has made it a central part of his campaign. He takes credit for leading the charge at the State Lands Commission, and – by a two-to-one vote – stopped Arnold from selling the Ocean to oil companies. Garamendi even started a Facebook group last June to put grassroots pressure on the issue – and generate free publicity for himself.

But the obvious question beckons – what would happen if Arnold controlled two of the three votes on the State Lands Commission? Garamendi deserves credit for blocking offshore oil drilling, but he only has that power because he is Lieutenant Governor. If he wins a seat in Congress, Arnold could appoint his replacement – who would then get a vote on the State Lands Commission. The prospect of that happening is quite scary.

Garamendi had to answer that question at a recent meeting of the East Bay Young Democrats. He replied the state legislature would “never allow it” to happen, because offshore oil drilling is such a crucial concern. The Governor appoints the Lieutenant Governor if there is a vacancy, but both houses of the state legislature must confirm by a majority vote. And because the legislature stood up to Arnold on this issue during the state budget, it is reasonable to expect them to raise such questions during the confirmation process.

However, there are three reasons why the state legislative “check” may not be enough.

First, the State Lands Commission deals with a lot more than just offshore oil drilling. According to its website, its mission is “providing stewardship of the lands, waterways, and resources entrusted to its care through economic development, protection, preservation, and restoration.” And like the California Public Utilities Commission (CPUC), the State Lands Commission must deal with powerful corporate interests with a lot of money at stake. Offshore oil drilling is one of them – but on low-profile environmental issues, Arnold’s two-to-one majority could get a free pass.

Second, political appointees frequently make promises to the state legislature during the confirmation process – only to break them later. For example, CPUC Commissioner Rachelle Chong, promised in 2005 before her confirmation that she would be a consumer advocate against deceptive AT&T practices. Now, she is trying to de-regulate Lifeline telephone service.

Third, state legislators may have their own agenda in approving Arnold’s appointee for Lieutenant Governor. Everyone expects Schwarzenegger to appoint a Republican, and some have speculated it will be State Senator Abel Maldonado. Democrats would be all too thrilled to get rid of Maldonado, because it would launch a special election for his Central Coast district – giving Democrats the chance to have a two-thirds majority in the Senate. Legislators may calculate that the benefit of passing a budget without the GOP extremists holding the state hostage exceeds the possible dangers of offshore oil drilling.

Garamendi picked the wrong district to run for Congress, because he could have run in the 3rd District against Republican Dan Lungren. But he took the easy way out by picking a blue district, which by sheer name recognition he could win a special election. Now, as the Governor threatens to pursue offshore oil drilling and other threats, a Garamendi victory could undermine all the environmental work he has championed throughout his political career.

And that’s not a legacy that he would be proud of.