Garamendi Runs for Congress – But in the Wrong District 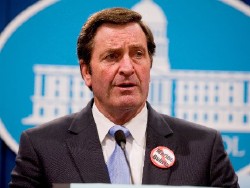 With his fourth run for Governor failing to get traction, Lieutenant Governor John Garamendi yesterday announced his plan to run for Congress in the East Bay’s 10th District – in a special election to replace Ellen Tauscher. On name recognition alone, Garamendi will be the front-runner in a crowded field – although State Senator Mark DeSaulnier has key endorsements that will make it competitive. But while running for Congress is a smart move for Garamendi, it would be far better for Democrats – and progressive politics – for him to run in District 3 against Republican incumbent Dan Lungren. Tauscher’s seat is safe for Democrats regardless of who runs in the special election, while Garamendi is probably one of the few candidates who can win District 3. He has deep roots in the 3rd District – which includes a large swath of the Sacramento suburbs, along with Garamendi’s native Calaveras County. It is traditionally a “red” district, but Barack Obama carried it last November – and Lungren came unexpectedly close to losing to an under-funded Democratic challenger. At a time when Democratic activists are pushing the Party to take back “Red California,” Garamendi’s choice of districts could not be more disheartening and misguided. Expect this to become an issue at this weekend’s State Democratic Convention.

Congresswoman Ellen Tauscher has been nominated for a high-level position in the State Department, and expects to resign her seat after getting confirmed. While no special election has been scheduled yet, many politicians in the East Bay’s 10th District (which includes most of Contra Costa and Solano Counties) are already positioned to replace her. With no term limits in Congress, an open seat is truly a “once-in-a-lifetime” opportunity for ambitious politicos – and there is no shortage of viable home-grown Democrats ready to make a run. The 10th District was a conservative, suburban area when Tauscher first won it in 1996 – but Democrats there now have an eighteen-point edge in voter registration, making it (for all intents and purposes) a “safe” blue seat.

State Senator Mark DeSaulnier of Concord already has Tauscher’s blessing for the seat, along with endorsements by Congressman George Miller, State Assemblyman Tom Torlakson and State Senate President Darrell Steinberg. State Assemblywoman Joan Buchanan of Alamo – who picked up a “red” district in the last election – is also considering a run, although some have wondered if it’s a good idea. Former San Francisco Examiner reporter Adriel Hampton is actively campaigning, and Anthony Woods – a Harvard-educated openly gay African-American Iraq War veteran – is contemplating a run. All of these candidates are Democrats.

Based on polling for the race prior to Garamendi’s entry, “undecided” was the landslide winner – because all four candidates have very low name recognition. As a four-time candidate for Governor, two-time State Insurance Commissioner, and current Lieutenant Governor, it is fair to assume that John Garamendi will be the new front-runner. And with the compressed schedule of a special election, Garamendi would benefit from the crowded field to win a relatively easy victory by a plurality vote. It’s no surprise that Garamendi has dropped out of a grueling run for Governor (where he was simply outgunned by three better-funded opponents), and going to Congress is a nice consolation prize.

But is it wise for Garamendi to run for Congress in District 10 – or should he run in District 3 against Dan Lungren? Garamendi currently lives in Walnut Grove, in the southwest corner of Sacramento County – at the very edge of District 10. Half of the town is in District 10, but the other half is in District 3. As he told the San Francisco Chronicle, his house literally straddles the border. Rather than enter a crowded field of Democrats, Garamendi would better serve the Party’s goals and the progressive cause by running in the 3rd District. All he would have to do is change his voter registration to his family ranch in Calaveras County – where he has deep roots.

Lungren Seat is Tough, But Winnable

As I’ve written before, California is a deep blue state that is only getting bluer – as Republicans are increasingly turning off voters in places like Orange County and the Central Valley. New registration statistics from the Secretary of State’s Office show that, for the first time, Republicans don’t have a majority of registered voters in a single Congressional District. And last November, Barack Obama carried eight Congressional Districts that currently have Republican incumbents – although the Democratic Party did not target them. In California, Democrats have seats ripe for the picking.

One of these districts is Congressional District 3 – which includes the suburbs east of Sacramento, parts of Solano County, and stretches to the Nevada border to include all of Alpine, Amador and Calaveras Counties. Right-wing Republican Congressman Dan Lungren (who lost to Gray Davis in the 1998 Governor’s race by a 20-point landslide) has represented it since 2004, and initially expected to have a safe seat. For the longest time, Democrats assumed that fielding a candidate there was a hopeless cause.

But in 2006, an upstart Democrat named Bill Durston challenged Lungren – with no real support from the State Party. He lost by 22 points, but tried a second time in 2008. Again, the Party offered him few resources – but he came within 5.5% to scoring an upset. On the same ballot, Barack Obama beat John McCain in the 3rd District. Demographics played a role – the latest voter statistics show that registered Republicans outnumber Democrats there, but only by two percentage points. Five years ago, the margin was seven points. The national Democratic Party plans to target District 3 for 2010, and a candidate with high name-recognition could be what it takes.

Durston, however, has ruled out a third attempt to challenge Dan Lungren. Without Garamendi, there is no clear candidate yet.

If John Garamendi were to run for Congress, the logical place would be District 3 – not District 10. He was born in Calaveras County, and his family has a ranch there – where he has many high-profile political functions. In 1974, he was first elected to the State Assembly to what was then the 7th District, which includes much of the same territory. In 1976, he won a seat to the State Senate – which he represented for fourteen years. Again, it contained much of the same territory. While Democrats should be diligent and leave no district behind, it’s also important to field candidates who can actually win. And there are not many Democrats with Garamendi’s stature who could relate to rural voters in that way.

Because he was running for Governor, Garamendi has about $750,000 “cash-on-hand” in campaign contributions. Assuming he can clear the legal hurdles to transfer these funds to a Congressional race, it would dwarf Dan Lungren’s re-election warchest of $121,000. Of course, Garamendi could also easily outspend any of the Democrats in District 10 – but the more than six-to-one advantage he would have over Lungren proves that the race is eminently winnable. In fact, the only way I could see why Garamendi wants to run in District 10 is that it would be easier. But everyone else would miss out — it would replace a spirited race full of “new blood” candidates in District 10 with a lame coronation, while shutting out the Democrats’ best opportunity to win an extra Congressional seat.

Garamendi has been running for Governor since 1982, when he lost the primary to Tom Bradley. He ran for State Controller in 1986 (a stepping stone for Governor), but lost the primary to Gray Davis. He was elected State Insurance Commissioner in 1990, but passed on re-election to run for Governor in 1994 – only to lose the primary to Kathleen Brown. After working for the Clinton Administration, he was again elected Insurance Commissioner in 2002. In 2003, he entered the race for Governor during the Gray Davis recall – but dropped out two days later when it was apparent Lieutenant Governor Cruz Bustamante had more support. Three years later, the two men ran for each other’s job – which Garamendi won. Shortly afterwards, he announced his plan to run for Governor in 2010 – where he has lagged behind other Democrats in polling and fundraising.

It’s no surprise that Garamendi has formed an “exit strategy” to run for Congress – given how the California Governorship has eluded him for three decades. But if he wants a legacy that helps Democrats and progressives get stronger, Garamendi should run in District 3 – where his candidacy would be more helpful. A group of bloggers have already launched a website that urges him to switch into the District 3 race. Garamendi would be wise to listen to such counsel.

EDITOR’S NOTE: Paul Hogarth will be a delegate at this weekend’s California Democratic Convention in Sacramento. Stay tuned for a preview and updates in the next few days.