Gambling: The Kryptonite of Professional Sports

by Harrison Chastang on September 4, 2007 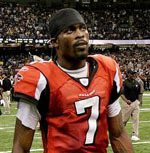 Former Atlanta Falcons quarterback Michael Vick will never play in the NFL again. Let’s forget about the dogfighting for a minute. The real reason the NFL freaked out over the Vick scandal is because of the gambling aspect of this incident. According to the evidence Vick set up and ran the betting operations over six years, although he claims he never actually made bets. In essence Vick was the CEO of an illegal gambling operation.

Illegal gambling is kryptonite to professional sports. Eddie DeBartolo was forced to give up his ownership of the San Francisco 49ers because he was convicted of giving former Louisiana governor Edwin Edwards $400,000 for a casino license. Even though Eddie D fully cooperated with prosecutors, he has not been allowed to have any official involvement with the league, and probably never will.

The NFL, NBA or MLB are so paranoid over gambling, legal or otherwise, that they have refused to seriously consider placing a franchise in Las Vegas. Over the years the NBA has flirted with the idea of a team in Las Vegas. The Maloof brothers, who own the Sacramento Kings and the Palms casino, have been unsuccessful in persuading Sacramento officials into building a new stadium for the Kings.

Insiders viewed the decision by the NBA to hold this year’s All Star Game in Las Vegas as a sign that the basketball association had softened its opposition to involvement with Las Vegas and could soon clear the way for a Kings move to Vegas. A successful move to Vegas by the Kings may have paved the way for one of Florida’s baseball teams, or a certain East Bay football team, to relocate to Las Vegas.

But the recent gambling scandal involving NBA referee Tim Donaghy has put the prospect of professional sports in Las Vegas on the deep, deep freeze. Pete Rose’s gambling is the reason he isn’t in the baseball Hall of Fame and why he has been banned from Major League Baseball.

Over time, Vick could get work as a sports commentator. But because of the gambling aspect of the dogfighting scandal, he’ll never work in pro or college sports as a player, coach or executive.