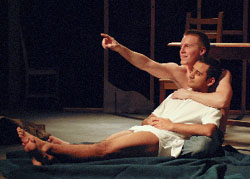 This new play by Salvatore Antonio is the story of a young Sicilian boy who has mixed feelings about his sexuality. Gabriel is the youngest son born to immigrants. His Catholic mother adores and dotes over him. Equally, his father shows favor to Gabriel – practically ignoring the older son. He may be a gift from God to them now, until they find out that he is gay and is having an affair with a school chum. A cool Irish kid, whose dad is a Cop.

Gabriel’s brother is straight. So Gabriel gives him fashion tips on how to dress before going out. The brother tucks his shirt in his pants. Gabriel tells him that he should not tuck the button down shirt in his pants, but let it hang down outside. I guess this is to show that Gay Guys are more up on ‘Trendy’ than the straight guy.

Although this is a touching story at times, it never really draws you into the oft-told story about coming out as a gay man. We’ve been in and out of that closet for many, many centuries. No problem with rehashing something – but in this play you really don’t care much about the characters. There is a void here.

Sometimes a playwright can take a story like this and give it a fresh sound and look. This is not one of those times. The staging is strange and ominous. Most of the scenes take place in an unfinished basement around a huge dining room table.

Some of the most interesting moments come when the Italian Mom rants and raves like the over the top Italian Actress Anna Magnani. Of course, grieving Italian mothers do mourn loudly.

Brian Patterson (Marco – the older son) battles verbally with his depressed Mom. Some of this dialogue goes on too long, as did the speeches by Gabriel. Also – why was it necessary to have the actors ‘freeze’ in place for 15 minutes? It made no sense – and must have made the actors feel that they were being water-boarded. On-stage torture is what I would call it.

This play still may have a future if some severe cuts are made. But that’s not likely to happen.

To sum up: Intriguing acting — fascinating staging and lighting. On the ‘Do I care?” meter. It’s low.

At the New Conservatory Center

Territories is beautiful to look at with fabulous lighting and sound. And it brings great expectations for Betty Shamieh’s Territories at the beginning. The promise does not hold up.

The story takes place during the Crusades in the Middle East. There is a powerful Sultan and his beautiful sister. The Sultan would rather make deals with enemies than fight.

The way I see it – the Sultan is very kind and caring to his sister, who has epileptic fits. She goes off to Mecca without any bodyguards and is captured by a Catholic Knight who holds the sister for Ransom. If this sounds like an Arabian Nights story – it is. The Sister encourages the Knight to have sex with her. Her purpose seems to get him to attack and kill her Brother. The reason is not clear. It is puzzling. This princess does not seem to be seeking power. What is she up to? It’s anyone’s guess. She pretty much succeeds – but her lover, the Knight is the one that gets killed. Maybe this is what she wanted.

Whatever the reason…. she’s nuttier than a fruitcake. I wouldn’t call this feminism – I would call it just plain dumb and stupid.

The story is supposedly inspired by actual historic events. The playwright says that the story draws strong parallels with the current political and gender issues in the Middle East. I saw none of those parallels.

However, for a fairy tale about a Princess, a Knight and a Sultan it is a pleasing pastiche. The acting is more than top drawer. Without the great talents of Rod Gnapp (The Knight), Nora el Samahy and Alfredo Narciso (The Sultan) the play would fall apart.

To sum up: Territories is frequently beautiful but frequently lacks originality. It’s a story that you give your own ending to.

AT THE MAGIC THEATRE

This musical show is a powerful tale of love’s triumph over all roadblocks. From the opening scene where the cast is practically floating on clouds with Angels flying around the stage, you feel that dreams really do come true.

There is pure artistry on the Orpheum stage. It’s part Ballet, part fantasy and pure beauty. The technical wizardry is virtually unbelievable. There is one beach scene where the water looks like it is actually undulating. There are several other totally amazing stunning visuals. It might be a good idea for some Broadway shows to see this show and find out how they did this magic.

Along with quick changes to new costumes, there is dancing with fans that look like flowing water. There is the drum dance (an audience favorite) along with some great Opera singing.

The full Orchestra helps to create a whirlwind evening of music, dance and vocals that follow the History of ancient China.

There are also some fun modern pieces thrown into the mix. I’ve never seen so much talent and precision dancing ever on a stage. When people say “Lively Arts” – this show is it.

Here’s the rumor. “The Wiz” has been postponed and removed from the SHN 2008 season. It is being replaced with the US Premiere of the ‘Ha’Penny Bridge’ a musical by Alastair McGuckian. The show is Broadway Bound. What is it they always say about canceling a show? Oh Yes, here it is. “Due to ‘creative team schedule conflicts.”

Here is a brief on “Ha’ Penny.” It takes place in Dublin, 1922. The story is about English troops as they are about to move out. Civil war is going to tear the city apart. There is political violence and poverty along with greed, deceit, jealousy and love. Not a good combination, is it? But, like “Les Miserables” – it is a musical and a damned good one.