Fundamentalists to Play the Super Bowl 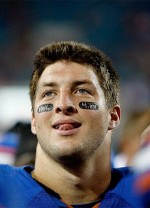 Looks like a homophobic right-wing group may have its chance to proselytize against abortion in a $2.8 million ad during next month’s Super Bowl, which airs February 7 on CBS. This, despite the fact that the network has always had a policy against issue-oriented ads during the annual sports event that attracts more viewers than any other boob-tube offering.

Focus on the Family, which pushes bad old traditional family values that include bashing queers and keeping women barefoot and pregnant, has announced that Florida Gators quarterback Tim Tebow and his mother will be featured in the spot. According to reports, the two will discuss the fact that before he was born, she was advised to have an abortion because of complications with the pregnancy.

It’s unknown at this time whether a pro-choice group will try and buy time on the program or if CBS would even accept any counter point of view.

In 2004, CBS rejected an ad from the United Church of Christ (UCC), which was promoting a more liberal message: inclusiveness, something Focus on the Family doesn’t believe in, especially if it means accepting people who don’t buy into its fundamentalist brand of Christianity.

The ad, which was deemed “advocacy,” showed, among other thing, a gay male couple that was not permitted to enter a church while straight couples had no trouble getting in.

The commercial’s tagline: “Jesus didn’t turn people away. Neither do we.”

A CBS letter to UCC stated that it wouldn’t accept an ad that “touches on and/or takes a position on one side of a current controversial issue of public importance.” The station has maintained on other occasions that Super Bowl ads are not appropriate if they take a stand on issues in which “substantial elements of the community (are) in opposition to one another.”

When it really comes down to it, there’s little difference between the proposed Focus on the Family ad and the one from the UCC. They both tackle controversial issues. They both take clear stands. They’re both part of the kind of debate that should take place in a democratic society.

Owning a piece of the public airwaves, CBS has a huge advantage in that debate. It can choose which advocacy group’s message it will bring to its audience. Its stated policy of not airing advocacy ads at least levels the playing field. Accepting an ad from the right and not the left makes it obvious that the suits at CBS are more comfortable with the anti-gay, anti-abortion crowd at Focus on the Family than with the liberal Christians at UCC.

It would be nice if CBS could be sent a message, but all the protest emails in the world are not going to matter to a station that makes untold millions from an event that has a huge chunk of the country glued to their seats.

No doubt CBS would simply laugh all the way to the bank.