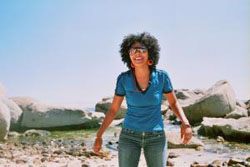 (Ed note: This film screens with “COUNTING HEADZ: SOUTH AFRIKA’S SISTAZ IN HIP HOP” at the Roxie Cinema on February 11 at 4:30 PM and February 17 at 12 PM)

For the past five (and probably six) Septembers, Rome’s 10th District/Cinecitta has sponsored High Fight. This municipal district provides walls in a selected location. Hundreds of graffiti Writers come to create graffiti in a designated space and hopefully bring formerly drab walls back to life. Allocation of spaces for Writers depends on an individual’s level of skill, with the better Writers getting more visual spaces. For the duration of the event, come rain or shine, Writers can work to their heart’s content without worrying about police harassment. Criticism from older residents complaining of vandalism or fascistic behavior is a different matter entirely. The 2005 High Fight provides a starting point for Emanuele Constantini’s documentary “G.R.A.: Graffiti, Roman Art.” This documentary, which makes its U.S. premiere at this year’s San Francisco Independent Film Festival, looks at the rationale behind High Fight. Could what’s considered in San Francisco a so-called “quality of life crime” actually be considered as an art form in its own right? Given the title of the film, Constantini’s answer is a firm yes.

The filmmaker’s conclusion may not be novel to those with a passing familiarity with America’s own graffiti subculture. But if the older Roman citizens seen in “G.R.A.” are representative of anti-graffiti attitudes in that country, then Constantini’s film is clearly aimed at showing such folks that graffiti writing is not an expression of spite or mental illness.

To that end, “G.R.A.” methodically refutes the familiar complaints about graffiti. The reasons Writers make graffiti vary from being artistically inspired by seeing the colorful graffiti of the New York City subways to asserting one’s individuality against a constant bombardment of media messages whose sheer mass seems aimed at shutting down one’s brain.

An especially potent visual argument for the latter viewpoint comes in a couple of montages. A montage of legal commercial advertisements comes in a series of dangerously calming colors, legibly bland lettering, and plastic photographic poses. By contrast, the series of pieces in bright reds and electric blues are rendered in very individualistic lettering which proclaim the creator’s uniqueness.

The interviews in “G.R.A.” also show that practitioners constantly evolve in the process of writing graffiti. What begins as an “any surface which can be spray-painted is fair game” attitude can eventually change to one of “art and historical monuments should be respected and left alone.” The simple monochromatic tag eventually leads to the colorful piece only after a lot of experimentation with trying different ways of linking letters or sketching and drawing different backgrounds. Some graffiti Writers eventually move to design work or other legitimate outlets to satisfy their artistic yearnings.

“G.R.A.”’s discussions of the practicalities of making graffiti show the discipline and skill involved in the process of Writing. There are significant differences between a throwup and a flop. Certain spray paint caps will create different effects with the released paint. More conservative San Franciscans will definitely take issue with an interview sequence discussing the positive character-building aspects of creating graffiti.

Constantini’s portrait of Roman graffiti-making culture fortunately escapes the starry-eyed puff piece trap by showing some of the subculture’s flaws. A couple of graffiti Writers candidly admit what they do is vandalism, yet their acts can provide an incredible adrenaline rush.

Fights have broken out when a graffiti-writing group has found their creations obliterated and overwritten by the work of another group. The subculture’s demographic is about 90% male, and the cause is unclear. Should the viewer take at face value the claims that women graffiti writers lack the physical agility, skill, or perseverance to create graffiti on a regular basis? Finally, angry security guards have started shooting at graffiti writers. Then again, Constantini does not go into further detail on this point.

Given the mainstream media’s promotion of the idea that writing graffiti is a crime without redeeming social merit, there can never be too many Graffiti Subculture 101 documentaries such as “G.R.A.” On the other hand, it feels as if disagreements over the value of graffiti involve something more significant than the generation gap between the Italian generation born in the 1970s and their age 50 and up elders.

In that respect, Constantini missed an opportunity to broaden “G.R.A.”’s scope by not focusing on the artistic and political issues raised by High Fight. For example, if a government could provide an ongoing “legitimate” outlet for graffiti Writers, would such an outlet compromise the integrity of graffiti art? Or if one accepts that graffiti is art, why should a Writer’s primitive tags be allowed to remain unmolested if they’re the equivalent of rough sketches or artistic false starts? Or why should a gray crumbling wall enjoy greater social cachet than a colorful but illegal bit of spray-painting?

“G.R.A.” may not provide a cinematic kick in the nuts to pontificators on both sides of the graffiti issue. But what the viewer sees of High Fight may inspire some new thinking regarding what business people regard as urban blight.