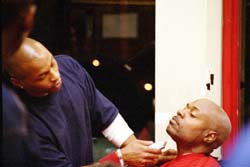 (*Screens with LOOPS, DO YOU WANT THE ELEPHANT MUSIC?, and LOS TABAQUEROS at the Roxie Cinema on February 15 at 9:30 PM and the Victoria Theatre on February 17 at 12 PM)*

Bill Mc Cullough’s decidedly non-avant garde documentary “Cutting Edge” provides a compelling and humanistic portrait of a black-owned barbershop. The documentary’s structure takes the form of a prototypical day in the life of Levels Barbershop. This hair-cutting establishment, which has been around for a decade, is located in New York City’s Harlem district. The business’ clientele spans the age range of young to old and runs the class spectrum of street merchants to MBAs.

The viewer’s guide to Levels’ community is Malik. He is one of a staff of roughly half a dozen at the shop. Other Levels staff members include June, who’s also Malik’s brother. June got Malik involved in hair-cutting because he was tired of Malik’s constantly hitting him up for money.

But the most famous member of Levels’ staff is Dennis Mitchell, better known as Denny Moe. The film shows a brief montage of his handiwork, such as a haircut which depicts a bar of music wrapped around the back of a customer’s skull. The list of celebrities who have sported Denny Moe cuts includes such names as Mike Tyson, Dennis Rodman, and Boyz II Men. The most satisfied customer must surely be Oran “Juice” Jones. That R&B singer flies to New York City from Houston, Texas every other week specifically to get a Denny Moe haircut.

Levels may be a business establishment, where money is exchanged for the personal services of its barbers. But the place, like other black-owned barbershops, is a cornerstone of black urban life. The soul of “Cutting Edge” lies in its depictions of the conversations that occur within Levels’ walls as well as the culture that’s grown up around those talks. The subjects discussed range from when Mutually Assured Destruction can be ignored to Paris Hilton’s limited sexual charms. A conversation that starts between one barber and his customer may lead to barbers and customers in other chairs chiming in. Additional audience members to these talks include customers waiting their turn in the chair, street peddlers such as Ginseng Man, and even non-customers who’ve come by Levels just to listen to others’ talk. What Levels’ barbers and customers talk about definitely emits a friendlier vibe than the average CNN-style pundit shows. Even if the viewer disagrees with the views expressed, the honesty of a particularly expressed view can’t be denied.

What makes these candid conversations possible might be attributed to Levels’ truly democratic environment. People are acknowledged as having different levels of ability (e.g. Dain’s haircutting skills compared to June’s) or education (e.g. Pete the Columbia University student versus DVD Man). But that difference doesn’t provide a license to treat any person with more or less respect or assume one customer is automatically more credible than another person.

The world of Levels can be described without romanticism as a warmer community environment that puts the suburban shopping mall to shame. Exchanging money to obtain a haircut may get customers through Levels’ doors. But those customers find genuine care displayed by Levels’ barbers. Malik manages to talk down a cop-hating customer’s intense anger in the course of cutting the man’s hair. In turn, the customers of Levels reciprocate the barbers’ care. Jade has gone to one Levels barber for years. By accident, she discovers her preference for the hair-cutting work of another barber. This customer devises an elegant solution that both meets her needs and tamps down any ill feelings between the barbers.

“Cutting Edge” functions as a snapshot of black urban life. But it’s a picture possessing multiple levels of interpretation. One level that comes up late in the film concerns the changing demographics of Harlem. What was once a black haven has seen an influx of whites, Asians, and Hispanics into the area. How the barbers of Levels deal with these changes varies. Malik confesses that money is money regardless of who’s paying for a haircut. Left unsaid is whether a non-black customer would be treated as an equal during one of Levels’ freewheeling conversations.

“Cutting Edge” blunts its impact by not featuring a conversation discussing gentrification. If the habitues of Levels can talk about AIDS, why don’t they talk about a major issue affecting their ability to remain in Harlem? It feels like a slight cop out to have Malik simply say conversations about the issue had come up without leading anywhere. One might not want more footage of Pete the Ph.D. candidate talking about the issue. But isn’t there a Harlem community activist who could publicly discuss gentrification in Levels without alienating everybody in the shop?

As the film’s final shot shows, Malik and June may not obsess over the future. Getting through the current day suffices.