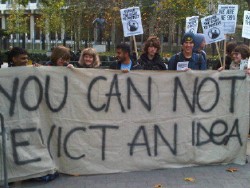 Like most progressives, Occupy Wall Street has made me more hopeful about America than I’ve felt in a long time. While the media first ignored the protesters and then made fun of them, everyone now has acknowledged they have a point. But as the focus has shifted from Wall Street greed to the right to camp in public places, we are in grave danger of losing much of the momentum that was built. A new poll released yesterday puts this into perspective – only 33% now “support” the Occupy movement while 45% are “opposed,” when those numbers were reversed a month ago. “I don’t think the bad poll numbers for Occupy Wall Street reflect Americans being unconcerned with wealth inequality,” said pollster Tom Jensen. “[But] what the downturn in Occupy Wall Street’s image suggests is that voters are seeing the movement as more about the ‘Occupy’ than the ‘Wall Street.’ The controversy over the protests is starting to drown out the actual message.” And as the public starts reading reports about shenanigans at Occupy camps that have nothing to do with the message of Wall Street greed, activists must shift strategies … before it’s too late, and we have wasted an historic opportunity.