From Living in the SRO’s – to Running Them 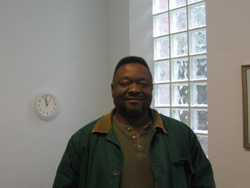 Some tenants who are formerly homeless and have lived in the City’s single-room-occupancy (SRO) hotels are now running these same hotels today through the Master Lease program. While Care Not Cash has provided housing to thousands of homeless people in San Francisco, it has also given employment opportunities to many of these same tenants as well. The Tenderloin Housing Clinic (THC) has a master lease on fifteen residential hotels through the program, and has always had a policy to hire from its client population. As of September 2006, 23% of the Clinic’s staff are formerly homeless or former clients in the program. Four of the Clinic’s five property supervisors (who collectively oversee the 15 hotels) are formerly homeless. And many of the buildings’ general managers are former tenants in the SRO’s themselves, as they make the transition from SRO tenant to tenant advocate to building manager.

When Herman Taft moved to San Francisco in 1999, he got a two-week voucher from Swords to Plowshares (a group that helps homeless veterans) to stay at the Jefferson Hotel on Eddy Street. “It was mad, stupid and off-the-hook,” he recalls about the living conditions. “I would have to go to two different floors before I could use a bathroom – because they were filthy and the toilets were all clogged up. I once found a tenant in the 3rd floor bathroom who had passed out with a needle in his arm. When I told the management about it, they just didn’t care.”

But a few months later, while working at Central City Hospitality House, Taft learned that the Jefferson had since been taken over by the City’s Master Lease Program – and they were hiring a General Manager and an Assistant Manager. An associate at Hospitality House suggested that they apply together for the two positions. “At the time, I had a job offer for a Pepsi Plant in Hayward that paid more,” he said. “But Luther reminded me that if I took the job at the Jefferson, I would get my own apartment.” He applied, and moved into the Jefferson Hotel as Assistant Manager.

Disgusted from his previous two-week stay at the Jefferson, Taft was determined to turn the place around. “I just wanted it to be safe, clean and quiet,” he said. “I was told by people categorically that there was no way I could turn that building around.” But Taft started with small changes – like re-painting the white parking zone in front of the building so that crack dealers couldn’t just drive up to the curb and sell their wares. And he brought in a solid crew of desk clerks from the neighborhood who did their nightly rounds with a bucket in their hands. Today, the Jefferson Hotel is a safe haven for SRO tenants – and Herman Taft has been promoted to Lead Property Supervisor at THC.

It’s a story that other Property Supervisors know well. In 2000, Melissa Bray moved to San Francisco from Oregon – and got a room at the Mission Hotel through the City’s Master Lease program. A year later, she became the Hotel’s Tenant Representative, working with tenant organizers at THC to advocate for other tenants in her building. Later on, she got a job as a Desk Clerk at the Hartland Hotel. By the time Herman left the Jefferson to become Lead Property Supervisor, she replaced him as General Manager. Today, she’s a Property Supervisor at THC and does “hard-target audits” when hotels have a difficult time collecting their rent.

Leona Luckett also started as a Tenant Rep at the Mission Hotel, and now works as General Manager at the Royan Hotel. “I helped advocate for other tenants in the building when I was at the Mission,” she explained. “We got our rooms upgraded. Instead of paying weekly rates, we got the management to agree to monthly rents. I got the idea to have a Safety Monitor on each floor because we had so many mattress fires. I developed a good rapport with the SF Fire Department so we can have fire prevention workshops in the building.”

The transition from “tenant representative” to “property manager” may seem odd for some. But many of the Managers and Supervisors that I spoke to said that their current job really isn’t that different. Linda Grigsby is the General Manager of the Hotel Pierre after having previously been a Tenant Rep at the Sharon Hotel. “Sometimes I see myself advocating for my tenants in this job,” she explains. “I know what to tell people from keeping them from losing their housing. Now the Tenant Rep at the Pierre often asks me what to do, because I have the resources.”

“I like working for the tenants because that was me a few years ago,” said Luckett — who regularly helps her tenants write their resumes and cover letters. “All the obstacles that they’re going through – the stress, the rent payments – I’ve been through that. I can relate to the tenants.” As Valerie Simpson, who lived at the Hartland Hotel and is now a Property Supervisor explained, “we all have to learn to work with each other – tenants and management.”

But one issue that the Property Supervisors and Hotel Managers have to deal with is when to evict a tenant. If a tenant in the building hasn’t paid the rent, or else has been a nuisance, they have to as managers pursue legal action to get them out. With THC’s mission to provide safe and secure housing, as well as their own personal background having been SRO tenants, it’s not something that they take lightly. “We work with the tenants through case management,” said Luckett, “but sometimes we have simply exhausted all our remedies and it’s the only thing to do.”

“When we do move on an eviction,” said Bray, “we already have a file this thick on the tenant.” The Managers have a zero tolerance position on violence, but if the tenant is behind on their rent, they do what they can to prevent the eviction from happening. “I gave one tenant seven different payment plans,” said Bray, “and he reneged on every single one of them.” In this line of work, unfortunately, some evictions are inevitable.

As formerly homeless clients themselves, the Property Supervisors have plenty of advice for current tenants in the Master Lease Program. Some of it is just practical on how to get by in the hotels. “Be vocal but polite, know your rights and responsibilities, and always get 2 copies of each receipt,” said Taft. “Go by the rules because they’re just common sense,” said Bray, “and tell us if there’s something wrong because we’re not mind readers.”

Managers urge their tenants to use their stay at the Hotel to improve their own lives. “I tell my tenants to use these rooms as a stepping stone to get a job,” said Luckett. “Seven to eight tenants at the Royan Hotel are now working as desk clerks in other hotels.” Grigsby urges her tenants not to stay content with their current living status in the SRO’s. “Do not stop here,” she advises them. “Keep trying to move forward. Some tenants in our building have gotten jobs and have managed to move on to apartment housing. I always keep a bunch of Section 8 applications at my desk and tell them to fill it out.”

“Never give up,” said Valerie Simpson, Property Supervisor at THC. “A lot of people have issues, but they can be worked through if willing. If you’re 50% willing to do it, great things can happen. I always make sure to tell tenants what their housing options are. You can do anything that you want to in life.”

The Property Supervisors and General Managers have shown that great things can indeed happen. The Master Lease program is not just a permanent roof over the heads for homeless people in San Francisco. It can also lead to employment opportunities, including the possibility to manage or supervise the building that you once lived in.

EDITOR’S NOTE: Beyond Chron is published by the Tenderloin Housing Clinic, which manages 15 hotels through the Master Lease program. Send feedback to paul@thclinic.org