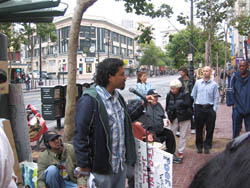 “Think of a Number”, said Peter Johnson, the new millionaire buyer of the office building where POOR Magazine is located and now faces eviction. He was smooth–smooth like a snake; his voice, his demeanor, his bootstrap “rags to riches” story. He was smooth and authentic-seeming as he prodded co-editor and founder Tiny AKA Lisa Gray-Garcia and myself to think of a “number”, i.e., the price of what it would cost for POOR to relocate our entire multilingual, multigenerational classroom and multi-media production center. At that moment, Tiny and myself were completely drawn into his story. What we later discovered was his cleverly woven web of lies and betrayal.

POOR Magazine is an indigenous organizing project. We practice eldership, true community, revolutionary journalism and truth journalism. We bring together silenced communities—mamas, elders, youths, migrant and indigenous folks whose voices are muted in mainstream media. We are media producers and digital resisters. We do the work that needs to be done. We practice interdependence rather than separation. We do not practice poverty pimpology. As POOR Magazine’s new co-editor, I am proud to say that we are true to our mission. We have not sold out. Now we are being evicted. And there is no “number” being offered to us, only eviction notices and threatening letters from lawyers.

POOR Magazine has called 1095 Market Street its home for the past 4 years. From our small offices we have produced our radio shows, our poor press books, our online magazine, our Welfare Queens theater production and provided community and professional development through our Race, Poverty and Media Justice Institute (http://www.poormagazine.org/RPMJ/).

Peter R. Johnson is a wealthy Australian whose fortune was earned through technology. He purchased 1095 Market Street for 2 million dollars in cash. His wife sits on the board of Larkin Street Youth Services. He says he cares about the youth of the community. His son Simon occasionally wears a knit sport-shirt with the Larkin Street logo as he saunters past the increasingly vacant offices at 1095 Market. Meanwhile, the youth at POOR’s FAMILY project which provides arts and social justice education and advocacy are being evicted.

POOR has faced eviction before—a few years back by a previous owner—and through a collective effort with other tenants—was able to retain its offices. This time the eviction didn’t just impact POOR, but many others in the building—including long term tenants whose tenancy extends more than a decade.

The tenants at 1095 Market contacted Chris Daly’s office for help. In mid August we met at City Hall with the landlord and his son Simon Johnson, whose vise-like handshake said volumes. The Johnson’s assured supervisor Daly and the tenants that they had the community’s best interests at heart and that they would meet tenants individually to reach agreements beneficial to both parties.
The day Tiny and I met with the Johnson’s we discussed the fact that we recognize and follow the UN Declaration on indigenous people—that we have a right to this land and a right not to be displaced. We also brought to the Johnson’s attention that their home country, Australia, was one of 3 countries that did not sign the UN Declaration. Mr. Johnson indicated he was aware of the declaration and that his home country was not among the signatories.

Mr. Johnson informed us that we were going to have to move. We responded that displacement would be an extreme hardship on our organization—one that has very limited resources. Mr. Johnson assured us 3 months free rent and that we would meet again to discuss compensation that would make for the smoothest transition. He indicated that he would donate new computers to POOR and help us defray our relocation costs. We were told to go back and think about a “number” i.e., fair compensation to present to our next meeting.

That meeting never came. What we got instead was a notice of an Unlawful Detainer action. We have been helped by the Tenderloin Housing Clinic and Randy Shaw. They wrote Mr. Johnson, reminding him of his commitment to discussing fair compensation for POOR Magazine. What we received was a letter from his attorney denying all the specifics of our discussion.
POOR Magazine is an indigenous organizing project practicing eldership and interdependence. Ours is not an easy road. What we stand for is threatening to the corporate and non-profit colonizers who are in control. As long as we are dependent upon them for grants and operating space, we will be running like hamsters in a cage.

POOR Magazine has launched a Capital Campaign ( which we are re-naming an “equity campaign” ) called “Homefulness”. Homefulness is permanent housing based on a sweat equity model—not based on how much money a person has or makes, but what they can contribute, be it art or maintenance work or teaching, child care,etc. Our dream is to permanently house 3-5 families, to have a space for a school, computer lab, and arts and performance café. Tiny at POOR Magazine already has created a template for homefulness at her current residence in the Mission. Homefulness works—and we want to use this blueprint to house and empower families. Bottom line, POOR Magazine needs a building. If you know of an available building or have suggestions on how we can obtain one, please contact us.

POOR Magazine needs your help. Any amount you can donate is appreciated. Donations can be made on line at www.poormagazine.org. Or you can mail donations directly to: