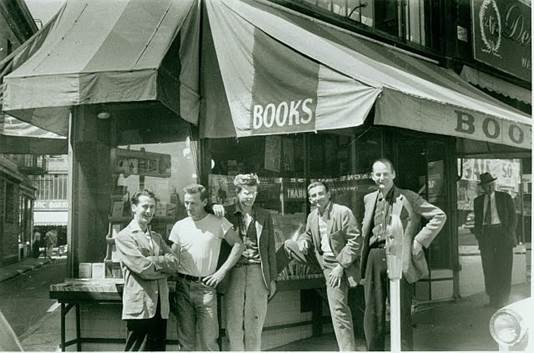 “San Francisco teems with young poets. Hundreds from about sixteen to thirty may show up and engage in an enthusiastic, freewheeling celebration of poetry.”

If you want to experience a sense of nostalgia, which can be as dangerous as despair, look no further than San Francisco in 1956. The population was about 700,000, and was largely Caucasian, though there were many African-Americans who had escaped from the segregated south and went to work in the shipyards. The newcomers brought The Blues with them, and helped ignite rock ‘n’ roll. In 1956, the civil rights movement was beginning to undermine segregation. Gays and lesbians were coming out their closets, especially after listening to a young poet who wrote about sex with “saintly motorcyclists” and who “screamed with joy.”

In 1956, everything seemed, not only possible, but also probable. A year later, during the celebrated trial of Howl, when local and national media barged in, nearly everyone discovered San Francisco. In 1956, it was still in large part a well-kept secret that the cognoscenti wanted to preserve for themselves.

Jack Kerouac insisted that there were the “most beautiful girls in the world in Frisco,” and that San Francisco “gives you the courage of your conviction.”

(Soon no one would use the word “Frisco.” It would be gauche to do so. But in 1956 it was still unpretentious “Frisco.”)

The city gave Kerouac the conviction to write his best short prose piece, “The Railroad Earth,” which was published in Lonesome Traveler and that begins with a long poetic sentence about “a little alley in San Francisco back of the Southern Pacific station at Third and Townsend in redbrick of drowsy lazy afternoons with everybody at work in offices.” Nearly everyone was at work who wanted to be at work, except Kerouac, who roamed the city and wrote in the little notebooks he carried everywhere he went on foot: from Third to Harrison, to the Embarcadero to Telegraph Hill and then to Chinatown and finally back to Third. He was in Heaven.

Half a century before Kerouac roamed the city, the novelist, Frank Norris, observed, “Things can happen in San Francisco.” Indeed, they could and did. The Giants would arrive in 1958 and play, initially, at Seal Stadium before moving to the ‘Stick. The Warriors would exit Philadelphia, make the Bay Area home and become the Golden State Warriors. Beatniks, hippies, anti-war protesters and liberated women would show up en masse in the Sixties. In 1956, there were already signs of things to come. Bohemians painted abstract expressionist works, performed avant-garde theater, drank inexpensive red wine and shocked members of the bourgeoisie, especially when they lived together without benefit of clergy. Allen Ginsberg shocked the police, the district attorney’s office and some of the professors at the University of San Francisco with a poem titled “America” in which he invited the nation to “Go fuck yourself with your atom bomb.”

On Columbus Avenue in North Beach, City Lights Book Store wasn’t much more than a hole in the wall in 1956, thought it was up and running and a destination for hipsters. At City Lights Publishing, Lawrence Ferlinghetti issued a collection of his own poems titled, Pictures of the Gone World, the first volume in the Pocket Poets Series.

After Allen Ginsberg performed Howl in October 1955 at the 6 Gallery in San Francisco, Ferlinghetti announced plans to publish the poem as number four in the Pocket Poets Series. A largely unknown ex-New Yorker, Ginsberg had crafted an epic about the “best minds” of his generation who were driven mad and who were starving, hysterical and naked. He wrote much of his epic on drugs, including peyote in a series of apartments and cottages all over the Bay Area. More than anyone else in the city, he aimed to provoke everyone who might be provoked.

Before publishing Howl, Ferlinghetti consulted with Jake Ehrlich and Al Bendich, two lawyers at the San Francisco branch of the American Civil Liberties Union (ACLU), the veteran civil liberties organization. Howl had four-letter words and graphic descriptions of sexual acts. In 1956, pornographers went to jail for publishing images of naked men and women, though Victorian prudery and American Puritanism were beginning to crack. At the ACLU, Ehrlich and Bendich agreed to defend Ferlinghetti against any charges of obscenity, if the authorities arrested him. Indeed, the lawyers were eager to mount the case for freedom of expression.

Jack Kerouac, who was in town for the “San Francisco Poetry Renaissance,” wrote to his friend, John Clellon Holmes, in May 1956 to explain what was happening in the city. In a long-winded sentence he explained: “Allen [Ginsberg] has a new brother called Peter Orlovsky who is mad young Russian Kafkean [sic] saint with wild hair and he and Allen take their clothes off at all parties even recent 40-people party with distinguished Buddhists chanting with drinks in their hands (Alan Watts), so you see them standing there naked chatting with distinguished gentleman and in the other room wild women are dancing as Creeley of Acton Massachusetts and I of Lowell beat.”

The Buddhists, the fledgling Beats and members of the bourgeoisie rubbed shoulders.

Creeley of Acton was Robert Creeley, a poet and former writing teacher at Black Mountain an experimental college in Black Mountain, North Carolina, which was fast imploding. At the same time, North Beach in 1956 was exploding with jazz, spoken word, Buddhism, wild women dancing and mad men who took off their clothes and stood naked, while distinguished gents sipped cocktails. Almost everyday, Neal Cassady, aka Dean Moriarty in On the Road, gambled, chased “after Chinese girls” and drove “about Frisco like whiplash,” Kerouac reported.

From all over the country, poets, writers and hipsters flocked to San Francisco: Creeley from New England via Black Mountain; Gary Snyder and Phil Whalen from the Pacific North West; Michael McClure from the Midwest; Ferlinghetti from New York and Paris. There were local talents, too: Philip Lamantia, who was born to Sicilian immigrants and raised in the Excelsior District, and who had discovered the wonders of surrealism, the erotic and the subconscious; and Robert Duncan who was born in Oakland, taught at Black Mountain College and published in 1944 a landmark essay titled The Homosexual in Society, a harbinger of sexual politics still to come. Duncan was back in the Bay Area and helping to fuel the Poetry Renaissance.

It was Creeley more than anyone else, who recognized and captured in words that moment in “the spring of 1956” which he called “an extraordinary time in San Francisco, an absolutely dazzling moment to be a young man or young woman in that milieu before the publication of On the Road and Howl so that the intensity and concentration of those writers was still primarily in a communal pattern.” After the publication of Howl in 1956, Ginsberg became addicted to fame more than ever before; after the publication of On the Road in 1957, Kerouac wilted in front of TV cameras, though he kept writing, including his minor masterpiece, Big Sur, which recounts his own battle with alcohol.

The San Francisco writers, who were nearly all poets, ate together, drank together, smoked marijuana together and drummed and danced together at jam sessions. They gathered at The Place on Grant Street in North Beach, where two Black Mountain College alumni, Knute Stiles and Leo Krikorian, poured drinks, told tall tales and entertained the crowds who lounged at the back of the room or sat at the bar and enjoyed “Blabbermouth Nights,” which was the embodiment of free speech.

“San Francisco teems with young poets,” Richard Eberhart wrote in an article titled “West Coast Rhythms” that appeared in The New York Times on September 2, 1956 that alerted the whole country to the Bay Area’s innovations and innovators. Eberhart added, “Hundreds from about sixteen to thirty may show up and engage in an enthusiastic, freewheeling celebration of poetry.”

Small groups of poets gathered at the home of Kenneth Rexroth, the Chicago-born anarchist who served as the gadfly and the godfather of the emerging Beat Generation writers.  One afternoon, Ginsberg had the nerve to say, “Rexroth, I’m a better poet than you are and I’m only twenty-one years old.”

In 1956, Ginsberg was thirty. Rexroth was 50 and on the far side of the generation gap, the grand-old man of Bay Area letters, a presence on KPFA, and the eyes and ears of The Nation magazine in San Francisco. The Rexroth household got really wild and crazy when Creeley and Marthe Rexroth, Kenneth’s wife, had an affair, planned to run away and live together in New Mexico. In the spring of 1956 they were the talk of the town.

“Creeley and Marthe are lovers. Kenneth has been flipping out,” Ginsberg wrote to Gary Snyder who had left the Bay Area for Kyoto, Japan to study Buddhism. Ginsberg added, “Too much to gossip about in such a short letter form. Anyway [Rexroth is] threatening suicide, predicting hers. ‘He’s not going to make a Natalie of my wife,’ weeping, holding my hand.”

Natalie was Natalie Jackson, a young woman from New Jersey who worked at I. Magnin on Union Square, and who was Neal Cassady’s lover (while Neal was married and with a family in San Jose.) Jackson also posed in the nude for artist Robert LaVigne at his Victorian on Gough Street, where bohemians gathered for “fun and games.” But everything was not copacetic. In December 1955, Natalie Jackson either fell accidentally or jumped intentionally with the idea of taking her life. The headline in The San Francisco Chronicle on December 1, 1955 read: “Woman Fights Off Rescue, Leaps 3 Stories to Death.” Her death cast a long shadow on the Beat scene in 1956.

Ginsberg wrote an elegy for Jackson. Kerouac told her tale, under the name “Rosie Buchanan,” along with the story of the San Francisco Poetry Renaissance in The Dharma Bums which was published in 1958, a year after On the Road appeared in print, made The New York Times bestseller list and turned the obscure Jack Kerouac into a celebrity. “Rosie Buchanan,” Kerouac wrote in The Dharma Bums, “a girl with a short haircut, red-haired, bony, handsome, a real gone chick and friend of everybody of consequence.” The novel immortalized the “shop girl” from New Jersey who worked at I. Magnin during the day and partied at night with the guys.

Rexroth survived his wife’s affair with Creeley, which ended before it could gather real momentum, especially after Creeley moved to New Mexico. When Evergreen Review published an issue devoted to “The San Francisco Scene” the editors, Barney Rosset and Donald Allen, invited Rexroth to write an introductory essay and set the stage for the work of Duncan, Ferlinghetti, McClure, Snyder, Whalen, Kerouac, Ginsberg, and one woman, Josephine Miles, who taught at UC Berkeley, and published in 1956, a work titled Prefabrications.

Rexroth’s essay for Evergreen Review was a love letter to San Francisco in which he wrote, “It is one of the easiest cities in the world to live in. It is the easiest in America. Its culture is genuine.”

San Francisco is still one of the easiest cities in the world to live in. If you don’t believe it, try LA, Chicago, New York or Paris. The culture is genuine, though it’s often challenging to find, much as it was challenging to find it in 1956. As San Francisco native, Philip Lamantia observed 60 years ago, there were “islands of freedom” and “a whole underground culture that went unnoticed by the city at large.”

Today, the underground culture often goes unnoticed, unless one goes out of one’s way to look for it. The city’s genuine subterraneans survive and at times thrive. In 1956, San Francisco created a seedbed for today’s rebels, with or without causes. Sixty-three-years later, the fans and followers of Kerouac still think of themselves as “dharma bums,” and young poets of all make and manner still howl in the style of Ginsberg.

Jonah Raskin is the author of American Scream: Allen Ginsberg’s “Howl” and the Making of the Beat Generation.