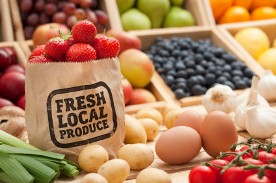 In the future, we may look back on December 21st, 2012, as the day everything changed for school meals in San Francisco. On that Friday, which marks the end of the first semester of the current school year, students in the San Francisco Unified School District may eat their last frozen, reheated school lunch. When school resumes in January, all students should be able to enjoy a freshly prepared school meal for the first time in modern memory.

On December 11th, a new meal contract is slated to come before the Board of Education, and when the Board approves it, school food will go from being mostly frozen meals prepared thousands of miles away, to being freshly cooked locally no more than 24 hours before delivery. While there have been many other positive changes to San Francisco school meals over the past few years, the move from frozen meals to fresh represents an enormous accomplishment for SFUSD Student Nutrition Services (SNS), one which was many years in the making, and which addresses the most commonly heard complaint from students, parents, and teachers.

An invitation for bids on the SFUSD meal contract was issued in early October, with bids due November 13th. Although five vendors attended the mandatory pre bid conference in late October, in the end only two companies submitted bids; the bids were from Preferred Meal Systems Inc., which has had the meal contract with SFUSD since 2005, and Revolution Foods. A Community Tasting Panel met on November 16th, to ensure that meals have taste, textural and visual appeal; the panel was made up of students, parents, members of the SFUSD Food & Fitness Committee, Principals and other stakeholders.

The bids were evaluated by SFUSD staff from SNS, purchasing and the legal department, and Revolution Foods was chosen as the vendor which SFUSD will recommend to the Board of Education on December 11th. Assuming the BOE approves the new contract, SFUSD will begin to serve the new freshly prepared meals when school resumes after winter break on January 7th.

In addition to requiring the meals to be freshly prepared and never frozen, the new contract also specifies no artificial colors or flavors, no high fructose corn syrup, no trans fat, and a ban on numerous additives that parents dislike, such as MSG, sodium nitrite and sodium nitrate (both common additives in cured meat products like hot dogs.) The sample 21 day lunch menu cycle shows Monday offering a vegetarian entree, Tuesday beef, Wednesday chicken, Thursday sandwich (hot or cold), and Friday an entree salad (which would contain protein, like a chicken Caesar.)

Middle and high schools already have some lunch offerings which are assembled fresh on site; this program began in earnest last year and resulted in thousands more older students eating school lunch each day. This year, the program was slow to get off the ground because the contract for the food used to assemble these meals (which include fresh sandwiches and stir fries) was awarded to a new vendor, local grocer Bi-Rite, after the start of the school year. But as of November 12th, more freshly prepared choices are available to older students.

In the elementary schools, however, the new meals coming in January will be the first chance these young students have had to experience a fresh school lunch; for many years, meals offered in these schools have been frozen and reheated. With many schools lacking a kitchen at all, and others poorly outfitted with ancient, often non-working equipment, it is impossible to prepare meals right at most elementary schools. The new meals which will be coming from close by, and cooked just the day before, will no doubt be a vast improvement in taste and appearance compared to the current offerings.

Changing the food at elementary school is a little trickier than at middle and high school, because while older students usually make their own food choices, many families of younger students still like to have some control over what their children eat. For elementary school, a new menu must appeal not only to students, but also to their parents and guardians. Year after year, the feedback coming into SNS has confirmed that “fresher food, not frozen” is at the top of most adults’ wish list for school meals.

SFUSD’s Student Nutrition Services operates the largest public feeding program in the city, and offering freshly prepared meals fulfills the longtime dream of SNS director Ed Wilkins. Based on my decade of working with Ed on school food issues, I know for certain that bringing in fresh meals has been his mission right from the start of his 15 year career with SFUSD.

As one of the parents who attended the November 16th taste testing told me, “With food like this available in the cafeteria, why would any parent want to put themselves to the trouble of sending a lunch from home?” Everything served at the tasting was required to be something which would actually be served in our schools under the new contract, so the mostly positive response which the tasting produced bodes well for the future popularity of freshly prepared meals.

Fresh healthy cafeteria food, happy parents, well-fed kids – but at what cost? We all know that food prices are going up again, and the new USDA requirements for school meals, which include more whole grains and fresh produce, add to the higher cost. A menu of freshly prepared meals will always cost more than entrees prepared by the millions and then frozen until needed, so the Board of Education and all stakeholders in the SFUSD need to be prepared to pay more for better quality fresh food.

The current offerings come at a cheaper price, but if students don’t want to eat the frozen food, what is the point of paying a lower price for it, then watching as much of it gets dumped into the trash, or students choose to skip lunch entirely rather than eat food that does not appeal to them? Decades of research links better nutrition with higher academic achievement; as well, it has been proven that hungry students struggle to learn. As always, students who qualify for free or reduced price meals will continue to eat at no charge.

What happens if the BOE doesn’t approve the contract? While it might appear that rejecting a more expensive fresh meal contract and reverting to frozen meals might be less costly, the savings would not be as much as some might hope. Even going back to frozen meals would be expensive. Food costs will go up in 2013 no matter whether fresh or frozen, and the new USDA requirements will be in effect regardless. The general unpopularity of frozen lunches means that the number of students eating school food would not be likely to increase and help offset the higher cost, but labor costs and overhead, like transporting meals to individual schools, will go up regardless.

However, with a Superintendent who has repeatedly said he supports better food for students, families who have long clamored for fresh lunches, a community which embraces healthy school meals as a social justice issue, a supportive Board of Education, and a lot of hard work by SFUSD’s Student Nutrition Services department, the time feels right for an upgrade. With food prices on the rise nationally, and the new requirements imposed by the Healthy Hunger Free Kids Act, the cost of school meals will rise no matter what, and suddenly paying the extra premium to better nourish our students, and help them achieve their full potential in the classroom, doesn’t sound like a luxury, but rather a necessity.

As school board member Jill Wynns told me, “I am excited about the San Francisco Unified School District being able to provide our students with healthier, fresher and tastier food through a new food service contract. These are objectives that we, and our supportive community, have had for years. The District has continued to make a serious commitment and investment in Student Nutrition Services because we know that healthy school food is a good investment in an effective student achievement strategy. Students who are well-fed and well-nourished are better able to learn and to focus throughout the school day.

“A number of community-based and advocacy, organizations, as well as groups like the Student Advisory Council, Youth Commission and SPUR, have been focusing on school food. City departments like DCYF and the Department of Public Health have helped underwrite better school food for years. It is clear that our community supports the effort to make our school food programs worthy of our children and of our progressive city. This new food contract is an important step toward achieving these ambitious goals,” Wynns said.

Now is the time for everyone who cares about students, food, and social justice to speak up and support the new school meal contract. The children who are the future of this City deserve the freshest, tastiest and healthiest food to help them grow and achieve their full potential.

The SF Board of Education meeting at which this contract will be presented begins at 6pm on Tuesday December 11th, in the Irving G. Breyer Board Meeting Room on the ground floor at 555 Franklin Street; the meeting is open to the public. Those wishing to give public comment at the meeting should contact the Board office at (415) 241-6427 by 3:30pm on Dec. 11th to ask to be placed on the speakers list, or fill out a speaker card at the meeting prior to the item being heard.