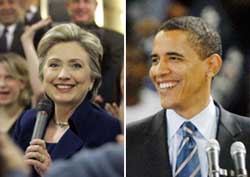 This weekend conclusively disproved two claims: that media coverage has favored Obama over Clinton, and that the Illinois Senator is favored by corporate America. In a week in which the Clinton family’s $109 million earnings were essentially ignored, when Bill Clinton’s receiving money from China business interests involved with the crackdown in Tibet is overlooked, and when the Clinton campaign created a new set of whoppers about Hillary’s Bosnian trip, the traditional media preferred to criticize the rather obvious claim by Barack Obama that working-class voters are “bitter” over the nation’s betrayal of their interests. And in emphasizing Hillary Clinton’s false framing of Obama’s words, no traditional media outlet had the guts to juxtapose her account of a happy, smiling “optimistic” working class with the virtually identical analysis routinely given by our President, George W. Bush. If anyone doubted that corporate America is desperate for a McCain-Clinton status quo race, this weekend closed the case.

Whenever one thinks that Hillary Clinton cannot sink deeper into Richard Nixon, Lee Atwater and Karl Rove style-politics, we are proved wrong. This weekend, Clinton led the media on a frenzy over Barack Obama’s social analysis of working-class America – a critique that would be an “A” paper on college campuses but which, in Clinton’s angry world, she describes as evidence of Obama’s “elitism.”

Yes, Barack Obama has committed the gravest of sins. He has told the truth about the federal government’s longtime contempt toward the social and economic security of its working-class.

This sin is grave because it exposes the dishonesty of the American Dream. The Dream says that if we work hard and play by the rules, our economic fortunes will advance over that of our parents.

Well, that has not been the reality for millions of hard-working Americans for some time now. And since the flip side of the American Dream is that failure is attributable to individual shortcomings, millions of working-class people are embittered both by the falseness of the Dream, and the lengths to which politicians have gone to stifle social and economic fairness.

Does bitterness over government unfairness lead the working-class to practice what Richard Hofstadter deemed long ago as “the politics of resentment”? Nixon and George Wallace sure thought so, and both made political careers appealing to such bitterness.

As with his speech on race, Barack Obama appealed to the intelligence of the American people. And our traditional media – the same media that has elevated anti-intellectualism from the days of Joe McCarthy, Nixon, Wallace and Ronald Reagan to that of George W. Bush – is boosting Hillary Clinton’s cynical attacks on Obama for telling the truth.

80% Believe the Nation is on Wrong Track

If I had not heard Hillary Clinton with my own ears, I would not have believed she could make the statement on Saturday that her travels in Pennsylvania revealed an “optimistic” and hard-working people who were not “bitter” about their situation.

I guess she’s only talking to the 20% of Americans who believe the nation is on the right track.

Last Friday, the Survey Research Center of the University of Michigan found that consumer confidence is at its lowest point in over twenty-five years. And a recent Pew report found that a smaller percentage of Americans said they were better off now than five years ago than at any time during its forty-four years of polling.

Give Clinton credit: she has succeeded in reaching that increasingly rare fraction of the working-class whose views defy the above survey results.

Clinton finds voters “optimistic”? The only other politician speaking optimistically about the current state of the United States is President Bush. Add Hillary Clinton to the list of politicians who either have no clue as to people’s true feelings, or prefer to substitute a fantasy version for the more bitter reality.

Clinton is the Bitter One

The biggest shortcoming of the media’s coverage of Obama’s comment could be its failure to note the irony of Hillary Clinton accusing someone else of being “bitter.” Clinton is the bitter candidate in this race, and the only serious presidential candidate in decades that is as equally acerbic and sarcastic is Clinton’s good friend, John McCain.

Why did the media not turn Clinton’s charges against her? Because of insecurity about its own avid support for the free trade and elitist economic policies that have so damaged the working-class over the past thirty years.

And Clinton has had the media on the defensive since Iowa about unfair coverage. Bill Clinton attacks the media coverage of Hillary in every press event, and one need only check the New York Times letters page to find a gaggle of Clinton-backers convinced that the male-dominated media has it in for Hillary.

It would be great to believe that Hillary Clinton’s ability to direct media coverage to her latest attack is just coincidence, or an example of effective staff. But activists know too well how the media frames coverage to suit its favored candidate (see Bush v. Gore, 2000)

How did the alleged Clinton-hating Times handle Obama’s “bitter” comment? Well, it not only put the non-story on its Sunday front page, but ended the article with a quote from a “Democratic strategist” who claimed that Obama’s comment “could mean he’s rendered himself unelectable.” He also said it would “offend rural voters.”

The strategist, David Saunders, is known for an ability to attract the “Bubba vote” in rural America, using Nascar, bluegrass music etc. But he was working for John Edwards when Obama won the Iowa primary, and Obama has defied critics throughout the primary season with his ability to win rural votes.

Saunders is certainly entitled to his opinion. But his comments should not have been used at the end of the article, with the Times giving them more weight than was merited.

And Obama has won the majority of endorsements from rural newspapers in Pennsylvania. Guess they don’t buy the line that it is “elitist” to say that the working-class is bitter over its betrayal by national politicians.

The more corporate America hears Obama, the more they are concerned that they cannot control him. In contrast, corporate America bought the Clinton’s back in the 1980’s, and John McCain has danced to their economic tune for most of his career.

With the nation’s recession deepening, and the popular mood turning grim, people are open to a degree of change that was considered unimaginable only two years ago. A McCain-Clinton race will bottle up this desire for change, while Obama is increasingly seen as too great a risk to the status quo.

Obama’s lead over Clinton remains insurmountable. But that won’t stop the traditional media elite from doing its best to get Bill Clinton, Mark Penn, and the whole gang back in the White House in January.