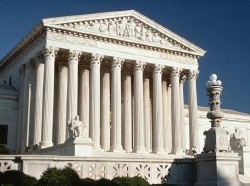 Ed note: Muchnick, a frequent contributor to Beyond Chron, learned this week that his copyright infringement case was accepted by the U.S. Supreme Court.

The Supreme Court has agreed to review a ruling by the Second Circuit Court of Appeals, which had invalidated a settlement of a global class action copyright infringement suit on behalf of freelance journalists against the combined newspaper and periodical industries and their electronic database partners. This new development sets up the possibility that the High Court will reinstall the settlement by reversing the Second Circuit’s holding that the federal courts have no jurisdiction over settlements involving copyrights not formally registered with the Copyright Office.

But for the slate of objectors to the settlement, including myself, the intervention of the justices also holds out another possibility: that the settlement as structured will be overturned on its merits after being reinstated for consideration by the Second Circuit.

Confused? Don’t be. It’s just another day in the life of the high-tech legal frontier. For my perspective, see my blog , Freelance Rights. The settlement case, which stemmed from the victory of writers in the 2001 Supreme Court decision Tasini v. New York Times, now is known at the High Court as Reed Elsevier, Inc., et al., Petitioners, v. Irvin Muchnick, et al., Respondents.

In 2005, the Authors Guild, the American Society of Journalists and Authors, and the National Writers Union brokered a settlement totaling $18 million, including legal fees and costs, to cover decades of infringement of freelancers’ works on LexisNexis and hundreds of other new digital products. In Tasini, the Supreme Court had affirmed the principle of Section 201(c) of the Copyright Act that a freelance contributor (as opposed to a newspaper or magazine staff member) licenses by default only one-time rights to the publisher.

In the years since Tasini, publishers have responded by shoving all-rights contracts down the throats of most freelancers. And to clean up the toxicity of past infringement, the industry in this settlement threw out bones as little as $5 each — as though willful and systematic theft of freelancers’ works were the same as a defective electric toothbrush.

The three writers’ organizations caved to the demands of both the publishers and the handful of named plaintiffs and their cronies, who would scoop up outrageously high proportions of the puny settlement fund. (In this universe of infringements, more than 99 percent of the copyrighted works were not registered — millions of individual articles written on a freelance basis for English-language newspapers and magazines, large and small, the world over, as well as encyclopedias and many other types of “collective works.”)

As a former National Writers Union official who had introduced both the concept of collective licensing and the litigation designed to bring publishers to the table to negotiate such a solution, I believe that the formula most in the interests of freelance creators, information consumers, and the entire architecture of a diverse and vital culture would be a royalty system loosely modeled on the music industry’s ASCAP. That, indeed, is the model embraced for book authors by the Authors Guild and the Association of American Publishers in their recently announced settlement with Google’s book-scanning project. That was also a prescription floated by Justice Ruth Bader Ginsburg and others of the 7-2 Supreme Court majority in Tasini.

In its Tuesday coverage of the Supreme Court’s grant of cert in Reed Elsevier v. Muchnick, the New York Times distorts what the Tasini court said about this.

The Times reports that the 2001 decision “seemed to contemplate and even encourage a settlement of the case, saying that the parties ‘may enter into an agreement allowing continued electronic reproduction of the authors’ works.'” The Newspaper Of Record would like everyone to believe that the Court already put its imprimatur on what I’ve dubbed the UnSettlement.

Here, in full context, are the relevant words of that eight-year-old ruling:

The Publishers’ warning that a ruling for the Authors will have ‘devastating’ consequences, punching gaping holes in the electronic record of history, is unavailing … The Authors and Publishers may enter into an agreement allowing continued reproduction of the Authors’ works; they, and if necessary the courts and Congress, may draw on numerous models for distributing copyrighted works and remunerating authors for their distribution.

The Court will hear this new case in the fall.

Irvin Muchnick is author of Wrestling Babylon and the forthcoming Chris & Nancy: The True Story of the Benoit Murder-Suicide and Pro Wrestling’s Cocktail of Death. Website: http://muchnick.net