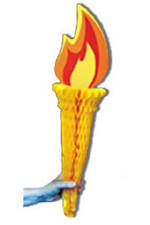 Probably not. At least according to the latest communication from the Mayor’s Office in San Francisco. What happens in practice is another matter altogether.

For weeks, there’s been uncertainty about how the City that is rocked regularly by demonstrations of all sorts will deal with a myriad of groups wanting to protest the arrival of the Olympic Torch relay on April 9.

San Francisco will be the only North American stop for the torch as it makes its way around the world to end up at the start of the Olympic games in Beijing in August.

A lot of people from all over the country want to be in San Francisco to make their feelings known about China’s continued occupation of Tibet, its refusal to speak out against the genocide in Darfur, and its routine violation of the civil rights of its own citizens.

At first, officials in San Francisco were talking about setting up “free speech” zones where protesters would be forced to confine their protests. Sgt. Neville Gittens of the Police Department originally told the SF Chronicle that the protests would be allowed “in areas associated with the route (of the torch),” but not actually along the path it will take through the city. He said that officials were working with the Beijing Olympics Committee to “address the concerns they might have in regards to any protests.”

The American Civil Liberties Union (ACLU) demanded that the City make public the route of the relay. The pro-First Amendment group said that protesters have the right to know, so that they can plan their activities accordingly. Gittens said that the route will be announced at the last possible moment. Newsom said that the Olympic Committee would decide the route.

Now the City’s singing a different tune. There’s still no route, though opening ceremonies will be held near AT&T Park and the closing ones at Justin Herman Plaza.

According to a letter Newsom spokesperson Joe Arrellano sent to the ACLU, everyone will be allowed along the torch route, including protesters. Large groups of protesters, however, might still be confined to “free speech” zones, but only for those “who feel it is imperative to stay together in order to have their message heard,” staffer Martha Cohen advised the mayor in a memo.

The fact that officials in San Francisco are loosening up their restrictions on protests of the Olympics Torch is a hopeful sign that they are not going to cave in to pressure from China and the Olympics Committee. It’s no secret that the global giant wants protests kept out of sight and out of mind. Memo to Beijing: It ain’t going to happen now or during the Olympics.

Peaceful protests must be permitted along the relay route as well as outside the opening and closing ceremonies. Let people have their say.