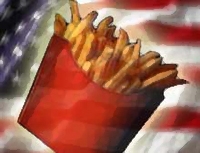 One week after Congressional cafeterias restored the “french” prefix to its fries and toast, the architect of the deletion of the term has abruptly quit his re-election race. Powerful Ohio Congressmember Bob Ney has been a major figure in the Jack Abramoff scandal, and it has now pushed him to give us his House seat. No word yet on whether Parisians are celebrating—or even care—about the departure of the anti-French congressmember.