“Freedom Fries” and the GOP’s Faux Solidarity with France 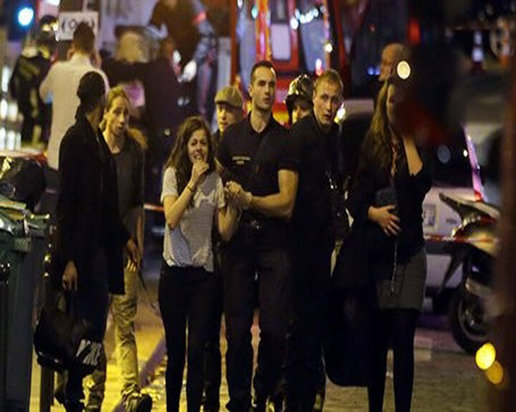 Republican myth-makers like Judith Miller, Newt Gingrich, Michelle Malkin, Ann Coulter, Ben Shapiro, and other ideologues, along with the GOP presidential candidates from Donald Trump to Marco Rubio, couldn’t wait for all the victims in Paris to be identified before they unleashed a stream of hateful statements about the Paris attacks that serve their dual objectives of trashing President Obama and calling for their own form of jihad against their perceived enemies around the globe.

They’re incapable of seeing that by politically exploiting this most recent atrocity, as they do with every other jihadist attack, to push their authoritarian and militaristic agenda they are exposing themselves as being every bit as nihilistic as the terrorists themselves.

Not long ago, in the run up to George W. Bush’s invasion of Iraq, these same right-wing Republicans were screaming epithets at France because the country that today the corporate media remind us is “our oldest ally” tried to stop the war before it began.

The French case was that there was not a WMD threat, and that invading Iraq would lead to fragmentation of the country and trigger more terrorism.

Like a good friend who tried to take away the car keys from a power drunk U.S. administration before it got behind the wheel, France had the wisdom and forethought to try to stop the United States from its biggest foreign policy catastrophe since the Vietnam War.

And how did the Republican Right in the U.S. respond?

The Republican-controlled House of Representatives stopped selling French Fries in its cafeteria (which are from Belgium anyway) and changed their name to “Freedom Fries.”

They vilified France because the French government had the good sense to try to block Bush and Cheney’s war of aggression in Iraq through its United Nations veto power.

The United States had not seen such culinary propaganda since the World War One era, when the U.S. government’s Committee on Public Information (the Creel Committee) sought to enflame anti-German sentiment by changing bratwurst to “hotdogs,” hamburgers to “Salisbury steak,” and sauerkraut to “victory cabbage.”

The Republicans displayed the same level of hostility toward the French for opposing their war of choice in Iraq as an earlier generation of American propagandists showed toward Kaiser Wilhelm II.

Right-wing talk radio hosts organized events where their fans poured French wine down gutters as a symbolic protest against the French who dared to question the infinite wisdom of their Commander-in-Chief.

The Republican House Majority Leader, Tom DeLay of Texas, began many of his Bush campaign speeches: “As John Kerry would say, bonjour.”

The same right-wingers that today are using the Paris attacks to further their shrill Manichean worldview denigrated “our oldest ally” for showing the good sense of not going along with Bush’s war in Iraq.

This phenomenon demonstrates the fact that since the Bush years the Republicans have dropped all pretense of wanting to build a “kinder and gentler” America or promising a new version of “compassionate conservatism.”

They’ve chosen instead to follow the ignorant and mean-spirited script of their ideological soul mates on right-wing talk radio.

In the context of Bush’s ongoing “War on Terror” their situational demagoguery has drifted into the realm of heartless neo-fascism.

They demagogue the Paris attacks while dismissing the idea that the United States could learn a thing or two from France’s examples of universal health care and publicly financed elections.

They denounce all who disagree with their war-mongering agenda with the kind of cocky self-assurance that Joe McCarthy showed in the early 1950s.

Last summer when I visited the French city of Strasbourg, a region where the horrifying history of war rings loudly, I stood for a long time inside Our Lady of Strasbourg Cathedral admiring the large memorial inside the cathedral to the fallen American soldiers who died there helping to liberate the city during World War Two.

I thought about the intertwined recent histories of our two countries and how much the French really loved the Americans, which made me all the more ashamed of the Republicans under George W. Bush who ridiculed that country and its people. Their raw partisan statements so soon after the horror in Paris renews this shame and should remind us just how extreme and heartless the party has become in recent years.