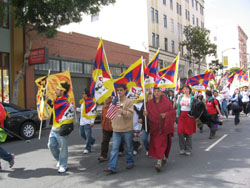 The Olympic torch arrived in San Francisco yesterday on its route to Beijing, but the community was out in full force to protest its arrival. An impressive array of activists marched throughout the Downtown area to oppose China’s treatment of Tibet — and it passed right by our office on Hyde Street. Beyond Chron managed to take time out to watch the protest, and take a few snapshots.