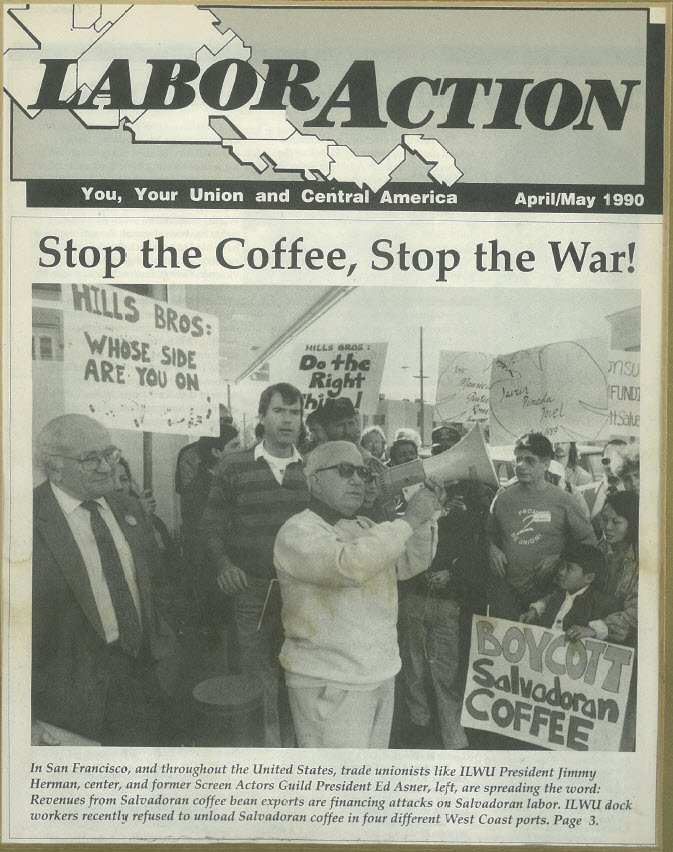 Fred Ross is behind Jimmy Herman. UNITE HERE's Tho Do holds the Boycott sign

Let’s start with a quick overview of Ross’ history. I include more on his organizing campaigns in my book, Beyond the Fields: Cesar Chavez, the UFW and the Struggle for Justice in the 21st Century (UC Press).

Ross began organizing with the UFW in 1970. In 1986 he co-founded Neighbor to Neighbor, a national grassroots group that targeted swing congress members to stop U.S. military aid to anti-democratic forces in Central America. Neighbor to Neighbor was arguably the most politically effective anti-interventionist grassroots group in U.S. history. The group’s boycott of El Salvadoran coffee (see photo above) was a remarkable success; it led to a permanent ceasefire in 1992 and the pioneering of “fair trade” coffee in the United States.

Ross then worked for Nancy Pelosi, who he had helped elect to Congress in 1987. Pelosi’s 1987 special election campaign featured house meetings as a key strategy.  Ross and other UFW alums on the campaign brought that strategy from the farmworkers movement, which learned it from Ross’s father, Fred Ross Sr. (who famously recruited Cesar Chavez at a house meeting).

The ACC helped lay the groundwork for the explosive growth of the nation’s immigrants rights movement. But I had not heard of the campaign until I interviewed Ross and wrote about it for my book—he has never cared much about promoting his successes.

Ross would go on to lead a statewide hospital organizing campaign first with SEIU and then with NUHW. He just completed twelve years reinventing the organizing department at IBEW 1245. Ross has now ended his paid organizing career, though he will continue organizing for progressive change.

Lessons for Organizers and Activists

Here are some of the key lessons that Ross’s legacy provides.

From his early years doing organizing and campus recruitment for the UFW lettuce boycott, Ross  was a genius at recruiting young people to a cause. He recruited in a way that kept many involved in organizing well beyond the immediate campaign.

We do not see enough organizing recruitment today. Some of this relates to people’s distrust of giving strangers their personal information during public events like the major marches around Black Lives Matter. Another cause is ACORN’s demise, which was constantly recruiting new organizers.

Ross’ recruitment method involves more than signing people up at a rally. For example, while in Berkeley he was tabling on or near the campus hour after hour, day after day. When people expressed interest in learning more about the farmworkers struggle Ross took the time to connect with them. Following a tactic promoted by his legendary father (Fred Ross Sr. trained both Cesar Chavez and Dolores Huerta and has his own organizing legacy), Ross made sure to give potential new organizers an assignment soon after making the initial connection. Once that assignment got them energized, they were hooked. A whole new life path often followed.

My friend Gary Guthman became a lifetime union organizer after connecting with a UFW table at Berkeley. He is one of many who connected to the movement around a campus or supermarket, where daily tabling also occurred.

Texts, emails, and social media have added a lot to the organizer’s toolbox. But Ross’s reliance on in-person recruitment and personal meetings still works best.

Once you work on a campaign with Fred Ross—even if it were forty years ago—you are forever in his contact list. He never forgets about those that once helped. I met Fred when I clerked at the San Francisco Public Defender’s Office in the fall of 1981 (in addition to organizing Fred also became an attorney). From that point on I would regularly get a call from him about a political campaign or cause I needed to support. I am sure I was not alone in this.

How many activists keep track of people they have worked on campaigns with for virtually their entire lives? I wish I had. Most of us go on to work with a new group of people in a different struggle. We don’t think how onetime allies could help another campaign years down the line.

Ross regularly reaches out to his vast network to engage in activist campaigns. That’s why we see UFW and Neighbor to Neighbor veterans working with Fred to elect Democrats in swing states. Many of these activists were eager to get involved but needed someone like Fred to give them a specific task. And Fred then reconnects all these former allies to each other, adding the social component so critical to getting people to work long hours for no pay.

Fred made and maintained many of these connections before the availability of email or computers. These tools make it much easier for young organizers to stay forever connected to fellow activists.

Fred’s UFW experience showed him the power of combining young activists with labor unions and religious leaders. These groups became the centerpiece for Fred’s national grassroots campaign to stop the United States from sending arms to anti-democratic forces in Central America.

The Neighbor to Neighbor photo above also shows Fred’s ability to enlist labor unions in social justice struggles. The ILWU’s support was key to the coffee boycott’s success; Ross gained that support by building and maintaining a longtime connection to ILWU leader Jimmy Herman. He has shown similar support to UNITE HERE struggles. That’s why UNITE HERE Local 2 activist Tho Do is also pictured backing the coffee boycott.

Fred also offers a model for unions trying to boost their member organizing. He joined IBEW 1245 upon invitation from his longtime UFW colleague Tom Dalzell, then head of the union. At the time, few considered the local to be an “activist” union. With Tom’s support, Fred and Eileen Purcell his organizing partner of past 23 years, began putting programs in place to change that. IBEW 1245 became an incubator for organizing ideas developed by Fred and a newly constituted local organizing team focused on energizing 1245 members. A key goal was for members to obtain the skills and experience for organizing for the Local and its allies.

People often think of organizing as a grind. But Fred Ross has always believed that “it’s important for  organizers to know how to make the work fun.” Fred loves “making mischief and stirring up good trouble” and his joy invariably passed on to his fellow organizers.

All the great organizers I have known enjoy their work. If you don’t find joy in the work, you are not going to last as an organizer. Fred maintains connections with so many activists on campaigns year after year and decade after decade by making this important work fun; I’ve talked to many who recall their time working with Fred as among the best experiences of their lives.

Fred Ross always brings optimism to his organizing campaigns. It may be the most important lesson he offers for young organizers.

Whether he was working for farmworkers going up against the nation’s largest growers or taking on the Reagan Administration, Fred always conveyed a sense to his fellow organizers and members that their side could win. He never guarantees victory. Nor does he claim a campaign can be won when facts say otherwise.

Fred’s optimism is contagious. He carefully outlines what must be done to achieve success and is great at convincing skeptics. His successful track record shows that his insistent campaign optimism is not misplaced.

In these difficult and challenging times, organizers who don’t believe their campaigns can succeed cannot inspire others to push for success. Fred Ross has been inspiring people for success for over fifty years—and he continues to do so in his “retirement.”

His current project? Organizing funding for a film about his father. Here’s where you can learn more about the Fred Ross Project. The Project’s goal is to inspire a new generation of organizers, something Fred Ross Jr. continues to do.