FRAMELINE 38 LGBT FILM FESTIVAL WRAPUP—“OF GIRLS AND HORSES,” “COMPARED TO WHAT: THE IMPROBABLE JOURNEY OF BARNEY FRANK,” “WETLANDS,” “FUN IN BOYS SHORTS,” AND “I FEEL LIKE DISCO” 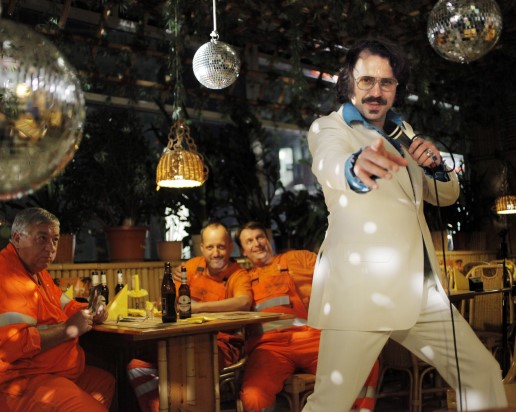 The three main female characters in Monika Truet’s new film “Of Girls And Horses” can be summarized by horse personality types.  Sullen delinquent lead character Alex is of course wild and untamed.  Horse trainer and lesbian Nina has been semi-domesticated yet is still independent.  Rich girl vacationer Kathy is like a foal slowly learning about the world.

Such archetypes need to be referenced since the plot of Truet’s film proves unsurprising.  Alex has been sent to intern under Nina’s tutelage at a rural German horse ranch.  Her opinion of her internship as a punishment changes when she slowly becomes fascinated by visiting rich girl Kathy.  This familiar plot leaves quite a bit unexplained in its telling.  Alex’ self-mutilation scars might be a result of friction with her stepmother, but who knows?  In fact, there never appears to be any sense of dramatic heft to the problems faced by the three female leads.

The frequent shots of the rural German countryside are at least occasionally beautiful, if somewhat reminiscent of “Sweetgrass.”  Unlike that acclaimed documentary, though, Truet doesn’t offer anything unique on her pastoral celebration that would redeem her dramatically slight tale.

Like other political biographies, Sheila Canavan and Michael Chandler’s documentary “Compared To What: The Improbable Journey of Barney Frank” hits certain expected touchstones in recounting the life of the titular Massachusetts ex-Congressional Representative.   These moments, told through the expected mix of interviews and archival footage, include Frank’s first campaign for political office and his decision to publicly out himself.

What makes Canavan and Chandler’s film well worth checking out is the equal time given to Frank’s political and personal flaws.  His mildly slovenly daily dress sense or his early closeted life in Congress doesn’t undercut Frank’s credibility as a public figure.  Instead, these flaws speak of his dedication in prizing the public good over looking good.

Canavan and Chandler show Frank’s willingness to embrace political compromise to bring about change demonstrated an optimistic belief in his fellow Congressmembers.  Yet today’s GOP has rejected the common good concept for an operational mentality not far advanced from a “bipartisanship is date rape” attitude. Have the Republicans forgotten the dangers of divided political houses?

David Wnendt’s film adaptation of Charlotte Roche’s controversial best-seller “Wetlands” twirls audience members’ chains of sexual prudery so rapidly that mental airspeed is nearly achieved.  Its recounting of protagonist 16-year-old Helen Melem’s sexual life and fantasies is delivered with such hilariously wanton brio that Pedro Almodovar might be amused.  Helen’s attempts to reunite her now-divorced parents provide the film’s dramatic grounding.  But what will stay with the adventurous viewers of “Wetlands” will be its unabashed willingness to boldly assert that exploring one’s sexuality can be fun.  Pizza delivery men and Johann Strauss would probably disagree.

This year’s “Fun In Boys Shorts,” Frameline’s collection of gay-themed comedy shorts, ranges in quality from entertaining to superlative.

Falling into the entertaining category are the following selections: Todd Lillethun’s “Safe Word,” where infidelity livens a pirate-captive fantasy role play with a climax that will make the average Good Vibrations worker blanch; Jack Taylor Cox’ “Trunk” literalizes closeted behavior as the elephant in the room with a guy dressed in fake elephant ears; “Sex Date” from John Sobrack mixes tenderness with comedy as its “straight” criminal fugitive gets involved in a gay online hookup; and a 13-year-old writer of Harry Potter gay fan fiction discovers his far older fan base really like holding wands in Clay Liford’s “Slash.”

Frameline 38 closed out with the heartwarmingly bittersweet German comedy/drama “I Feel Like Disco.”   The odd title of Axel Ranisch’s semi-autobiographical film comes from a line in one of German disco king Christian Steiffen’s songs.

Teen overweight dreamer Florian and overbearing swimming coach father Hanno manage to coexist thanks to mother/wife Monika.  That emotional balance gets thrown awry when disaster strikes Monika.  Florian’s and Hanno’s attempts to deal with the crisis gets complicated by Hanno’s heavy drinking and Florian’s growing attraction towards swimming student Radu.  Can the unexpected intervention of Steiffen (who plays himself) and his music help Hanno connect with his son?

Ranisch’s film successfully shares the better Pixar films’ skill at laying enough emotional groundwork for comedy to co-exist with tragedy in the same story.  Though the two male leads frequently clash, both of them have common points of interest.  For example, Hanno liked disco music enough in his younger days to get a suit that Florian swipes nowadays.

Steiffen’s almost magical role brings a nice “Calvin and Hobbes”-like ambiguity to the film.  The disco king’s appearance may be a product of Hanno’s extreme inebriation.  Yet why are Steiffen’s songs a propos?  And where did the parents of gay children DVD come from?

German viewers are more likely to spectacularly express their appreciation of Steiffen’s appearance.  But even if his songs don‘t inspire English-speaking viewers to dance in the theater, their bouncy energy comes across easily despite the language barrier.

(“Of Girls And Horses” is being commercially distributed by Wolfe Video.  “Wetlands” has currently been slated for a 2014 theatrical release by distributor Strand Releasing.  “Compared To What: The Improbable Journey Of Barney Frank” won Frameline 38’s Audience Award for Best Documentary.)